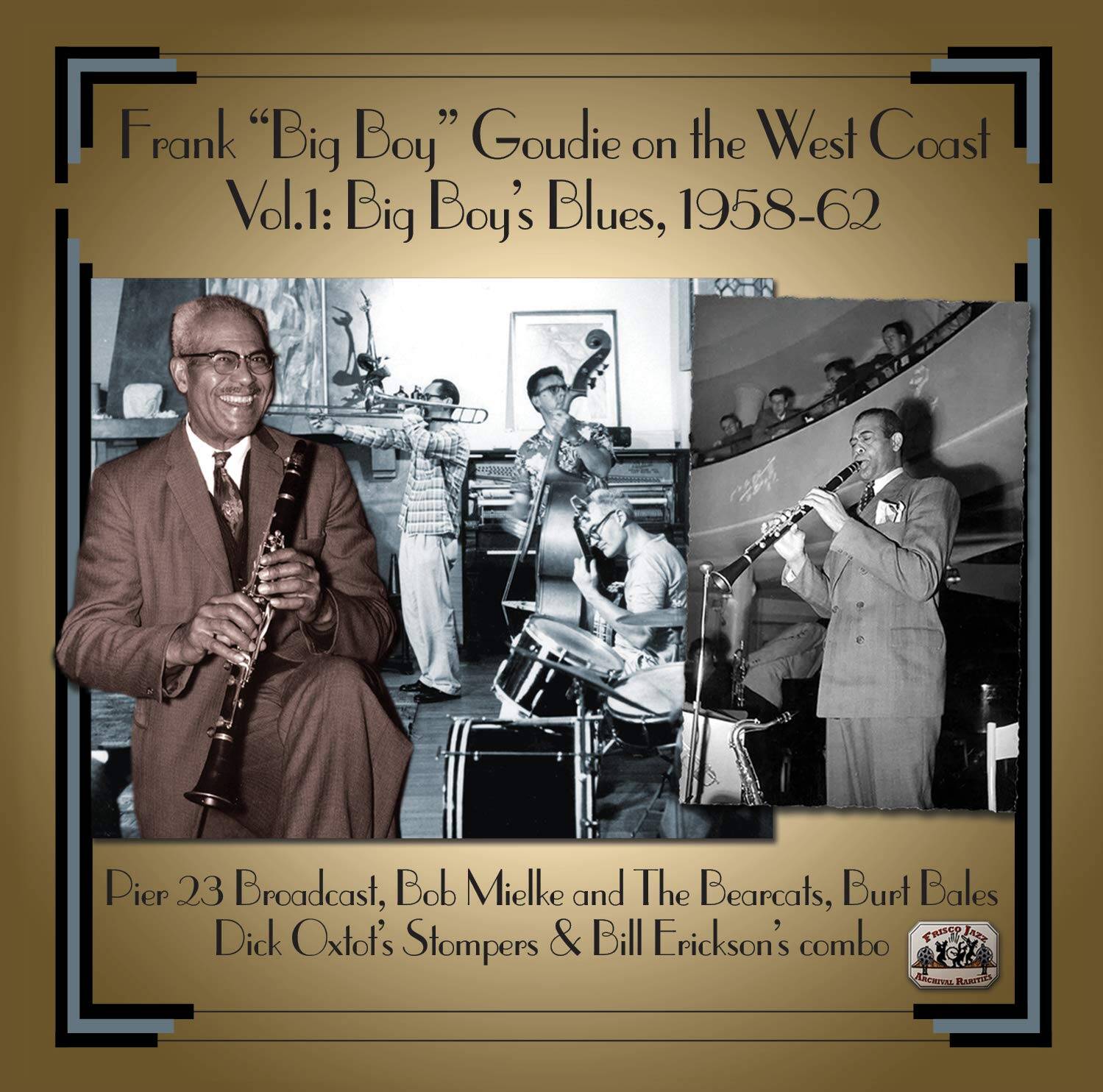 Standing at some six feet five inches and weighing around 250 lbs, Frank “Big Boy” Goudie (pronounced “Goody”) was an imposing figure on the bandstand, and his musical prowess was equally impressive. Yet he has, until now at least, been relatively unknown. In large part this is undoubtedly because he spent the better part of his life (1899-1964) working in Europe and South America, finally coming back in 1956 to the United States and settling in California, where he lived until his death in San Francisco.

As might be surmised from the title, this pair of CDs features Goudie playing with some of the best (US) West Coast musicians and the groups a few led. Although also proficient on trumpet and tenor saxophone, he does not play either here, staying with clarinet only. His playing of that instrument is notable for several qualities. One is immediately struck by just how smooth his tone is. Nothing is forced, and he effortlessly produces runs, smears, arpeggios, and just about any other clarinet technique that comes to mind. In addition, he is at ease in all registers on his instrument, as he demonstrates throughout the tracks of these CDs.

All of this is immediately apparent, from the first track on vol. 1, “Just a Closer Walk with Thee” to the last on vol. 2, “High Society.” In the process, he never tries to dominate in ensemble passages or duets, always having “playing for the band” in mind. His ideas are also highly interesting—witness those in “Say Si Si” (vol.1) where he trades contrapuntal choruses with Butterman and Bardin, or in “Just a Closer Walk with Thee” (vol. 2) and “Joseph, Joseph” (vol. 2), for example, where he and Mielke trade playing counterpoint to each other in successive choruses.

Goudie can also supply thoughtful obbligatos, as he does to Mielke’s trombone solo on “Just a Closer Walk with Thee” (vol.1). And his interpretation of Picou’s famous clarinet solo on “High Society” (vol. 2) is welcome relief from many others’ attempts to copy it note for note. He is also quite adept at switching gears to play in a more modern vein, one example being provided on vol. 2 of this set, “The King.”

As well as playing fine clarinet in a group setting, Goudie is also quite at home with a trio or quartet. With one instance, the trio we hear on “You Took Advantage of Me” (vol. 2), the spotlight is fully on him, and we hear his various improvisations, played in a very laid back manner. In fact, it is very relaxing to the listener—one can well imagine what a pleasure it would be just to sit back, favorite beverage in hand, and indulge in the music treat Goudie offers.

Finally, Goudie was also recognized for his vocals, but he is only given one on this set, “Basin Street Blues” (vol. 1); unfortunately it is somewhat off-mike, so it is difficult to judge its merits, but what one can hear seems to be good.

Given all of this, it is small wonder that Goudie was in high demand everywhere he played and never lacked for work, whether with a full size seven- or eight-piece traditional jazz band or simply a trio or quartet, all of which combinations are on this dual set of CDs.

These two CD’s, along with another set also put out by Grammercy Records, should help Goudie the musician become better known.* Dave Radlauer, who re-mastered, researched, and produced the set, also wrote the liner notes as well as a series of articles on Goudie which appeared in Just Jazz magazine (September, October, November, and December, 2020, issues) and also in The Syncopated Times (July, August, and September, 2020 issues). In them he supplies biographical details. Of this set of CDs, Radlauer says, “It may be found on iTunes, Amazon, e-Bay or streaming service.”