From the 2019 Bude Jazz Festival

How does one summarize a four-day festival? Let’s start with the setting. The program lists 35 bands, not all OKOM, or at least my kind of music (as far as I was concerned, Richard Exall goes Getz and the Brubeck project were definitely to be avoided), not all falling within the definition of jazz.

And then, one has preferences, mine is not to be where they play the flute. So one is left with hearing some bands more than once. Unfortunately, I missed two OKOM bands, as one clashed with a band I considered more interesting while the other one played at an open-air stage on a rainy day.

There were seven venues, a far cry from the previous Bude festivals I attended; in 2012 (the last I attended) there were 14.

The attendance, too, was smaller: In 2012, some venues were full to capacity and late comers were not allowed to enter; this year, the closest to that was the Dorine de Wit’s band at the Falcon Hotel on the first day, but even there it was not over-crowded, only all the good seats were taken. On an optimistic note, there were quite a few younger people in the audience, people in their forties and fifties, and perhaps younger than that.

Now to the music, which, after all, was the reason I went there. All the bands I heard were good, some excellent!

Since the proceedings started with Stan Allen and Friends, buskers, really,  on the Falcon Hotel porch, the Falcon was the first choice for the morning shows. On the 27th, it opened with The Sopranos, Chris Pearce and Andy Leggett, one of the highlights of the festival. Nobody should be surprised that the repertoire contained lots of numbers associated with Sidney Bechet; one of those was “Evolutionary Blues,” a reworking of Mezz’s “Revolutionary Blues,” and the encore, “Si tu vois ma mere.”

Richard Leach’s 7 Stars of Jazz, which I heard more than once, was also very good, what with John Hallam on reeds and Jim Douglas of the Alex Welsh fame on guitar and banjo. Not that the others were slouches, good solos abounded, too many to mention. And the drummer Graham Smith gave it a splendid lift, as he did with his own bands and the two-trombone show of Kevin Grenfell (who played trumpet in the Leach band) and Richard Leach. The program consisted of traditional standards; each Leach show also featured Jim Douglas with rhythm on some interesting material (such as “Watch What Happens”, a number I had not heard before. Leach’s “Good Queen Bess,” alone (without the trumpeter) was worth the price of admission. 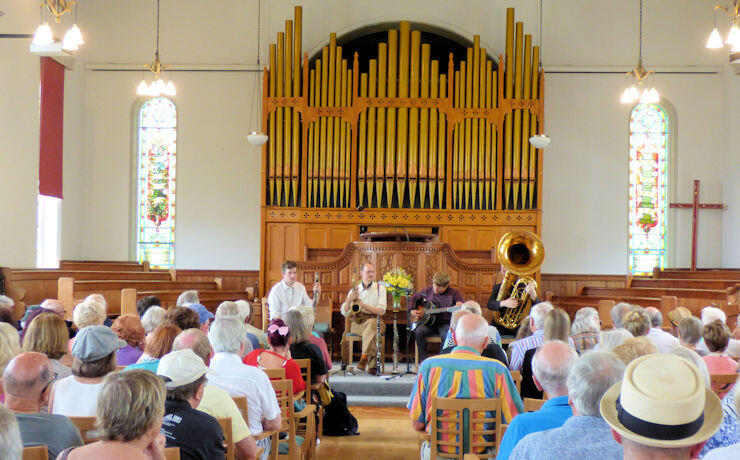 Frog and Henry proved to be a very interesting youngish group, with Ewan Bleach on reeds and vocals and F.H. Henry on guitar and vocals, also featuring Will Scott on reeds (including the rare in jazz bass clarinet) and Jack Butler on tuba. A violinist was advertised but failed to show up.

In addition to such standards as “St. Louis Blues,” on which Henry played the church organ (‘for the first time in his life”), the repertoire included less well-known numbers drawn from the Freddie Keppard book, the titles of which I didn’t get, as Henry’s announcements were not very clear,
at least to my foreign ears.

Washington Whirligig, another young band I had never heard before, also proved better than my expectations. The repertoire consisted mainly of standards, including Sonny Rollins’ “St. Thomas,” which has become popular with swing players. The band featured musicians heretofore unknown to me- David Hepworth on clarinet and tenor sax, Will Robinson on trumpet and fluegelhorn, Andy Bramall on banjo and guitar, Liz Hepworth on bass and Bob Cotterell on drums; most members also sang.

One of the highlights was the Nick Ward’s Jelly Roll Quartet, with John Penn on piano, Brian Mellor on banjo and the wonderful John Maddocks on clarinet. The program, not very surprisingly, featured a lot, but not exclusively of Morton numbers. And I love Ward’s minimalistic drum kit, with a real old-time bass drum. John Maddocks also appeared with his own excellent traditional (but not “British trad”) band and with Dorine de Wit.

There were some real “trad” bands, too: The Dart Valley Stompers, the Pedigree Jazz Band (whose program was announced as a tribute to British trad), Dorine de Wit & Her All Star band and the more New Orleans oriented Sunset Cafe Stompers. Since the Original Dixieland Jazz Band visited the UK in 1919, the Pedigree Jazz Band celebrated 100th anniversary of that visit by playing some ODJB numbers.

Some musicians played with several bands. The ubiquitous Graham Treverton merits a special mention, having played with more bands than anybody else!

I would also like to mention the two Gypsy swing groups, Strumpit Gypsy Jazz Trio, consisting of two guitarists (Andy Bucknell and Mike Bethell) and a bass guitar player (referred to only as “Dibby”), whose instrument looked like an overgrown Gypsy guitar and La Vie en Rose, consisting of five young musicians; Rebecca Wilson on violin, Dave McKeown, David Jones and Laurie Light on guitar and Yann Mahdjoub on bass (probably the oldest member).

At the lunch break there were open air concerts (partly segueing into regular concert time) and at the afternoon break, 6-8:19 PM, either Malcolm Hogarth or Chris Newman played at the Brendon Arms. Although listed as “solo,” they always had other musicians with them. 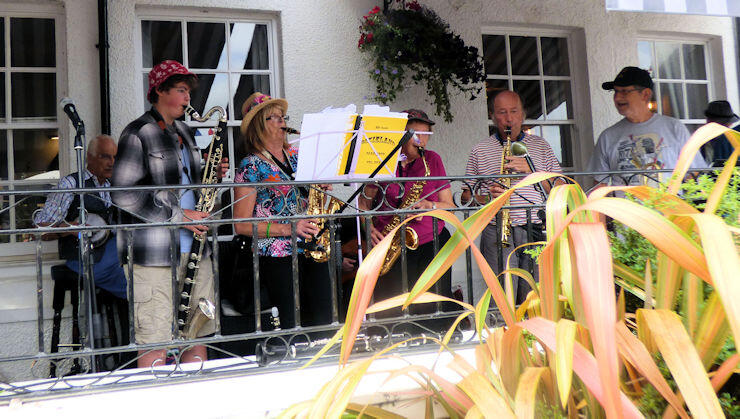 Last, but hardly least, I wish to mention the veteran and internationally famous pianist Keith Nichols, who appeared with Graham’s Smith’s Jazz All Sorts and with the John Hallam Blue Three.

If some bands get only a passing mention, it is not damning with faint praise. It’s just because they are well known to British jazz festival goers and because mentioning all bands and their repertoire alone would be longer than this, already overly long, review. 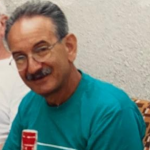 Born in 1941 in what is now Ukraine but at the time was Lvov, Poland, Marek Boym's early years were dominated by family migrations related to World War II. He first heard a swinging jazz band as a 12-year-old behind the Iron Curtain and became hooked. Until that time jazz had been taboo in Communist countries. In 1955 he attended an Acker Bilk concert in Wrocław, Poland. He has lived in Israel since 1957, where he has pursued his love of traditional jazz. He was a correspondent for The Mississippi Rag and has also been published in The Jazz Forum, a Polish monthly.