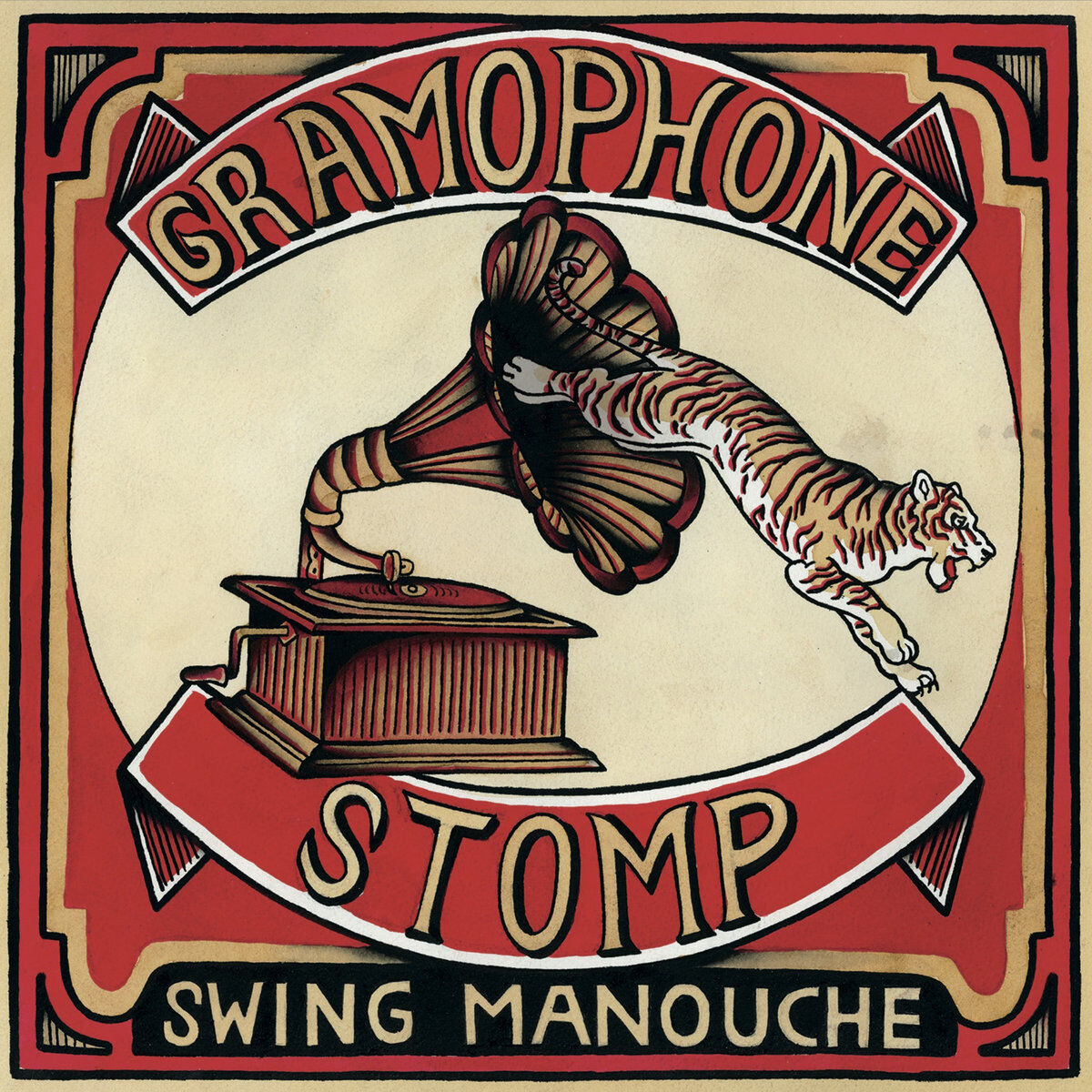 As I write this, I’m lying in bed with a banging headache, running a temperature. Listening to this album through headphones made the headache worse—no reflection of the music whatsoever (well, perhaps a little—more on that later), merely of the pathetic and overly sensitive state I find myself in. So I dragged myself from my sick bed and fetched my Bluetooth speaker, which packs a small but respectable bass cone into its little rubberized frame. This I perched on my chest as I lay, cursing the world—and soon I began to feel substantially better.

It’s no substitute for piping a record right into your eardrums, but as the little unit pulsed rhythmically in time with the bass, I imagined myself twirling around a dancefloor before a live band—and all was right with the world. Swing Manouche is the newest release by Gramophone Stomp, a young outfit from Montpellier in France. Manouche is what the French call the Roma people, of whom Django Reinhardt was one—you can probably guess where this is going.

This seven-piece swing combo is suitably string-heavy, with up to three guitars and an upright bass appearing on most tracks. Said tracks are mostly a combination of toe-tapping floor fillers and gently picked jazz ballads made famous by Jean “Django” Reinhardt (Django meaning “I wake up”—the more you know…). But they also feature tunes more commonly associated with big bands, dance orchestras, and blues artists, making for a highly danceable playlist with rest tracks (“Rèverie,” “Don’t Worry About Me” etc.) interspersed throughout—so I needn’t daydream myself tired.

Eclectic examples include Art Hickman’s “Rose Room,” which was conceived as a foxtrot, and “Georgia on My Mind,” Hoagy Carmichael‘s tune made famous by rhythm ’n’ blues man Ray Charles. The latter is one of my all-time favorites, and a song I associate inextricably with the piano—so I went into it with a defensive mindset (or as defensive as I could muster, in my misery). But I needn’t have worried for, while I love playing that song on the piano, Charles’ version isn’t one I’d dance to. This version, on the other hand, is crying out to be danced with its gently bouncing rhythm guitars (Audrey Leclair, Arthur Anelli and Rémi Peleyras) and sweetly meandering clarinet (David Tavani).

Most versions of Charlie Shavers’ “Undecided” feature a huge horn section—not least the famous side cut by Ella Fitzgerald with Chick Webb’s band, in which the horns fill in the spaces between Ella’s lines with bold, brassy fanfares. But Gramophone Stomp’s take creates an equally swinging sound with just a handful of strummers—another one I’d get up and dance to, if I didn’t feel like hot death on toast.

In fact crowded is the opposite of how this record sounds—which is not to say that it sounds sparse. The Hot Club-esque instrumentation lets (the aptly-named) Leclair’s voice soar, while remaining sweet and mellow, for the most part. My only audible complaint was listening to “Flambée Montalbanaise”—when the vocalist belted a piercing high note was when I tore the headphones from my skull and checked my ears for blood. More a function of my invalided state, I’m sure. But at the very top end, Leclair’s notes become a bit mushed together, leading me to think that this one should perhaps have been transposed down a tone or two.

Normally I wax lyrical about the pianist right about now. Guest player Auguste Caron is criminally underused, tickling the ivories on only two tracks. On the first of these (“Anouman”) he is confined more or less to a rhythm role—nice, but nothing to write home about. It’s on the second (“What a Little Moonlight Can Do”) in which he’s allowed to cut loose, which he does to great effect. It’s a shame he was excluded from the rest of the disc, but perhaps that’s just le swing manouche.

But this album is, as a whole, certainly something to write home about. Or even write about from your home, as you sink pints of water and chomp down painkillers. Speaking of which, it’s been a while since I’ve popped a pill—there must be something medicinal about Swing Manouche. Find it on Bandcamp now.