As half of acoustic jazz and blues duo The Washboard Resonators, percussionist Jack Amblin no doubt feels most at home on the little stages of backstreet bars and cozy clubs—a gig at a provincial theater would have been one of the bigger dates on his calendar, up to now. What’s more, having recently moved back home to rural Wales with his wife and their new baby, opportunities to play even club dates have lately been few and far between.

“I had to wind up two bands when I moved away from Leeds,” Jack told me, when we caught up in October. “I filled in for a big band called Down for the Count last week, in little theaters in Huddersfield and Norwich.” It was an unusually cushy job, for someone used to no-frills touring. “They’re a good band,” said Jack. “The pay was good, they put me up in a hotel—and fed me too. To work with a 12-piece like that is fairly rare.”

Jack had previously told me he was no fan of the limelight, so you might think finding himself on stage at the London Palladium, Liverpool Philharmonic, Belfast’s Ulster Hall, or a Dutch pop festival—behind his vintage Ludwig drum kit and his tricked-out washboard—would be his idea of a nightmare scenario. And yet he played all of these and more besides, touring Europe earlier this year with undoubtedly the biggest brand in old-fashioned jazz today: Scott Bradlee’s Postmodern Jukebox. 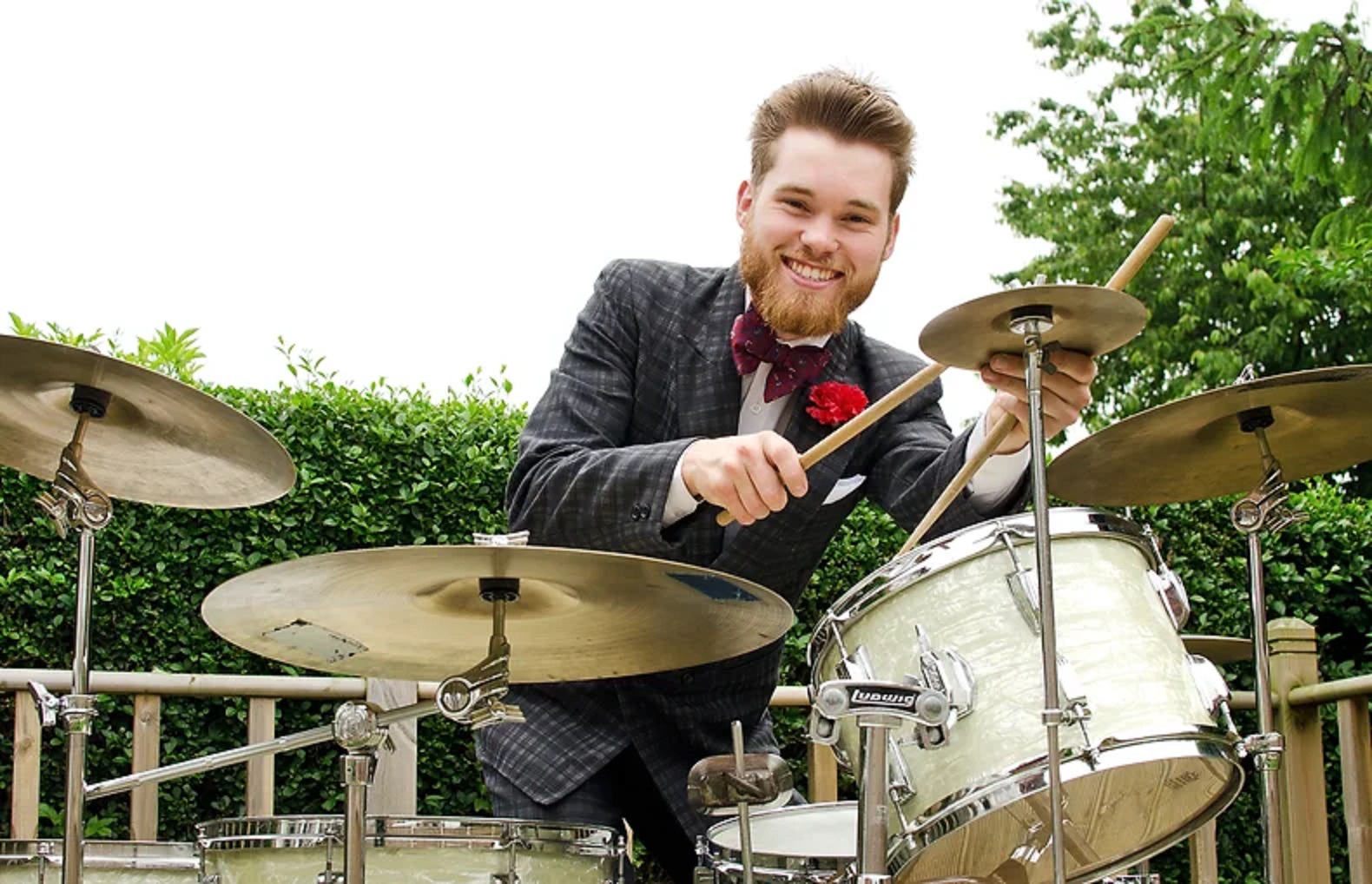 Founded in 2011, viral sensation PMJ imbues more-or-less modern pop songs with vintage vibes and has found a global fanbase which would be the envy of any jazz musician alive. Their YouTube channel has almost six million subscribers. Their Facebook page has three million followers. Their cover of Radiohead’s “Creep”—featuring American Idol finalist Hayley Reinhart—has drawn over 110 million views since it debuted in 2015. And it isn’t a fluke: Their take on Meghan Trainor’s “All About That Bass,” featuring fellow Idol alum Casey Abrams? Ninety million views. Their cover of Miley Cyrus’s “We Can’t Stop”? Twenty-six million. Of Coolio’s “Gangsta’s Paradise”? Twenty million.

Even for a mild-mannered Welshman who only sings when he has to, that kind of exposure is just too good to turn down. “My style of music is so niche, I probably won’t ever go bigger than PMJ,” Jack told me. “It was an amazing experience and it was a godsend to get it when I did.” So how did the incredible opportunity present itself? “I got really lucky,” he said, modestly. “I went to music college with the guitarist Mike Chisnall, about ten years ago. I didn’t know him that well, but he later moved to America with PMJ and he’s married to one of their singers.”

Mike hit Jack up in 2019, but the pandemic put a hold on their collaboration plans. “They wanted to put together a European version of the band,” Jack explained. (PMJ is now more brand than band, with several touring troupes.) “We would meet for rehearsals then go on tour, that was the idea. But in the end they just took me along, which was amazing.” Jack thinks Instagram helped him get the nod from Bradlee—as might be expected, from a manager who made his name online. “They look at your social media and all that,” he said. “I had a Ludwig endorsement, which gave me credibility, I guess. And if you get better gigs, like Down for the Count, people offer you more work. I’m just resting on my laurels, really.”

PMJ flew to the UK in April, planning to collect Jack and hit the road—but, yet again, Covid had other plans. “I caught it just before the rehearsals in London,” said Jack. “We were supposed to have four days together, after I finished a recording gig in Norwich. They put me in a hotel and I didn’t have symptoms, but I had the red line. Thankfully I tested negative the day before we were due to leave, so I did one dress rehearsal and we set off.”

The band bussed across the Continent over three months, playing everywhere from Ireland to Austria. “It was a mad experience being on the tour bus with 11 Americans,” said Jack. “We traveled through the night—we turned up and I didn’t know what country I was in. We slept in these very comfy coffin-like bunks, with lights and sockets and stuff. I slept better on the bus than in the hotels, actually, because I got used to the movement.”

It wasn’t just the travel arrangements which flabbergasted Jack, who is more used to touring in his beloved old Austin Mini. With PMJ he played some of England’s most prestigious venues, as well as festivals like Paaspop 2022. “I think the smallest gig we did was 1,500 people—the biggest was about 5,000,” he said. “I’d not done gigs that big before, but I quickly got used to it. It’s a very different vibe to a small jazz club, where you can see everyone’s faces.”

His favorite dates were Cardiff Tramshed—where he had a lot of support from family and friends—and the legendary London Palladium. “It was amazing to stand where the Beatles, Lonnie Donnigan and all those big names had gone before,” said Jack. “They had all these special guests so it got pretty stressful, having to sight-read charts. It was on a different level to what I’ve done before, but I managed it all right. So I’m grateful for the opportunity, because now I know that I’m up to it.”

And while some drummers might have hidden behind their kits, Jack threw himself into the razzmatazz. As well as regular washboard features, he even did some tap dancing. “They had a tap dancer called Demi Remick,” he said. “She was amazing—I just did a 16-bar phrase on one song.” The experience was vaudeville on steroids. “You have group vocal numbers, tap dancers, soloists—I love all that stuff,” said Jack. “For me to have my little feature doing a bit of singing and dancing was great. I’m not an amazing singer, but doing a few bits in my nasally voice and accent was fun. They did take the piss, but I felt accepted.”

The crowds loved it too, raising roofs all over Europe. “At the Liverpool Philharmonic and Ulster Hall—classical, sit-down venues—they were maybe a bit more behaved,” said Jack. “The Americans just assumed that all Brits were going to be so reserved, but when we did the Cardiff Tramshed or Rock City in Nottingham they went wild.” The glamor and sparkle of a PMJ tour might seem garish to some, admitted Jack, who normally appears alongside bandmade Martyn Roper in a three-piece tweed suit. “Some people will respect me more for doing PMJ, and some will respect me less,” he said. “But it offered such great opportunities. How many old-fashioned jazz musicians get to tour Europe?”

Playing pop songs through a vintage filter will also upset some purists, he admits, but Jack has no issue with meeting people halfway if it gets them interested in jazz. “Using modern songs makes jazz more available to them,” he explained. “Most people now don’t want to hear all that scratch and hiss on the old records. I love that sound, personally—but it’s not going to hold most people’s focus.” Jack will soon be back on the road with Martyn, touring little theaters with their two-man band, promoting latest album Streamlined Rag. “I’m very happy with the new record—you can definitely hear us improve as a band,” he said.

If he got another call from Mike tomorrow, would he go back on the road with PMJ? “I like to be in the limelight for a bit, then step out of it,” said Jack. “But yes, I’d love to do more of that sort of work in the future. They have at least two other drummers they use regularly, so nothing is guaranteed. If they want me back, great—if they don’t then it was an amazing experience I’ll remember forever. But I might not be putting myself forward to sing.”