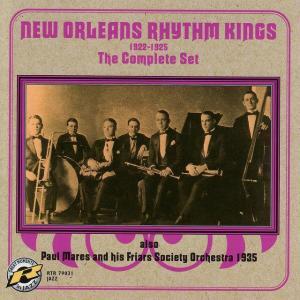 Because they followed the Original Dixieland Jazz Band by a few years and directly preceded the first recordings of King Oliver’s Creole Jazz Band, the contributions of the New Orleans Rhythm Kings (NORK) tend to be a bit overlooked.

They were the best jazz group to debut on records between the ODJB and Oliver and in 1922 had no real competition on records. The accurately-titled two-CD set The Complete Set has every one of the NORK’s recordings.

Leader-cornetist Paul Mares (who considered King Oliver an influence on his plunger mute work), trombonist George Brunies and clarinetist Leon Roppolo were the nucleus of the group which was originally known as the Friars Society Orchestra. They were a regularly working band for less than two years during 1921-23, making their mark on jazz history by featuring both freewheeling ensembles and solos (the ODJB played ensembles all of the time) with Roppolo’s choruses being particularly noteworthy.

During 1922-23 the group’s six recording sessions had three different instrumental lineups, appearing as a quintet, an octet and a tentet. Among the songs that the NORK either introduced or made popular were “Farewell Blues,” “Panama,” “That’s A Plenty,” “ Shim-Me-Sha Wabble,” “Weary Blues,” “That Da Da Strain,” “Angry” and “Tin Roof Blues” (with Brunies’ famous trombone solo).

Five songs (including “Milenberg Joys” and “Mr. Jelly Lord”) have Jelly Roll Morton guesting on piano, making those among the earliest integrated instrumental jazz recordings. Also included on this twofer are all of the alternate takes, the NORK’s final two sessions from 1925 (with Santo Pecora on trombone) and Mares’ only other recordings, his excellent set from Jan. 26, 1935.

The recording quality is as good as it gets for these early recordings [not anymore], the music is timeless, and the informative booklet is a plus. This is an essential acquisition for all serious early jazz libraries.

Since this review was published a new definitive set has been produced, please read: New Orleans Rhythm Kings Restored by Rivermont