The Man Who Shot Liberty Valance offers us one of American film’s great moments. U.S. Senator Ransom Stoddard (James Stewart) has gained his position of service from an act of selfless heroism: he has faced down Liberty Valance (Lee Marvin), a notorious Western outlaw. Stoddard is a good and true man who lives by the letter and spirit of the law. White-collar Easterner that he is, a gunfight on a dirt street took his ultimate courage. But he knows something.

Decades and grey hairs later, he returns to the scene for the funeral of his friend Tom Doniphan (John Wayne). This is big news: a U.S. Senator visiting a hole-in-the-wall Western town. The local press turns out and wants his story. Why has he come? Who was Tom Doniphan?

In the press interview, Stoddard reveals the truth: It wasn’t he who killed Valance: it was Doniphan, shooting from the shadows, covering for his friend, who never would have stood a chance. When the editor learns this, he puts down his pen. “You’re not going to use the story?” Stoddard asks. Replies the editor, “This is the West, sir. When the legend becomes fact, print the legend.”

Researchers and biographers depend on fact, not on legend. Justice, too, depends on fact, as does science. The Enlightenment took us away from monarchy and dogma and brought us to an age of reason.

So, what value does legend have, if it cannot be verified? The word derives from the Latin legere—“to read.” One could say it simply means story, or narrative. So what is the value of a story? When children want stories, they always ask, “Then what happened?” They might not care so much whether it is “true.” But they might care about the character’s motive. “Why did she do that?” They might want the hidden story.

We do want to know what “really happened,” but is there a value in mythology? Why does it endure? Why do writers write novels? What is the value of good stories like or Casablanca or Gone With The Wind if they are fiction?

And why might it have mattered to Louis Armstrong that he was born on July 4, 1900—Independence Day? All his life, he kept that story—although since he passed we have official documents showing, among them, three different birthdays within thirteen months of one another the most likely being August 4th, 1901 (see dippermouth.blogspot.com). How much deeper need we dig? And if we do unearth a definitive birthdate, what importance will it have compared to Louis’ plangent, momentous creation and cultural change it brought? 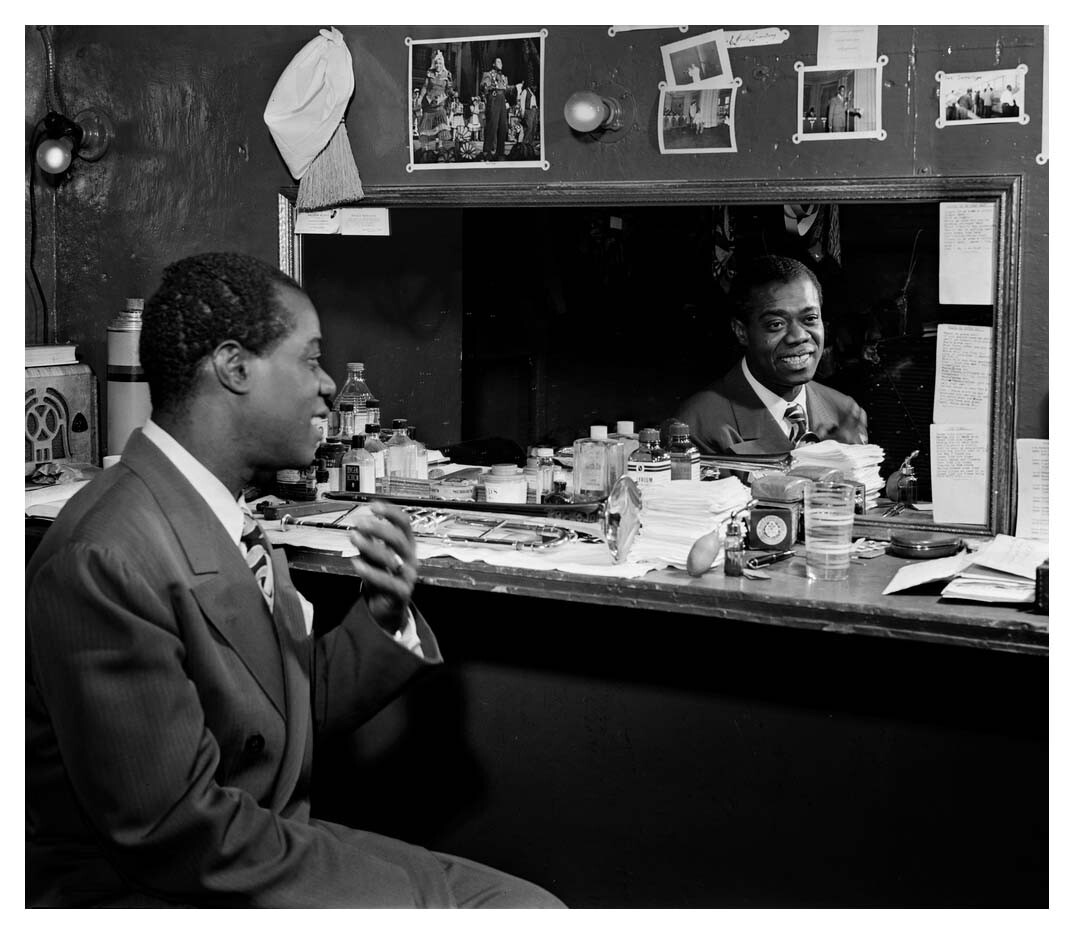 In fact the history of early black American musicians likes to hide. Africans, once captured and enslaved, typically lost their African names. Many had no idea of their birthdays. Looking through Al Rose and Edmond Souchon’s New Orleans Jazz: A Family Album, we find numerous black players with birthdates incomplete or omitted.

As Bruce Boyd Raeburn has written of Daniel Vernhettes’ Jazz Puzzles, “The title appeals to anyone who has attempted to find adequate documentation on lives that were often lived in the shadows, not by choice, but as a consequence of American social policies that attempted to render people of African heritage inferior and invisible, despite the value of their accomplishments, musical and otherwise.”

We may not know how Louis “knew” his birthday was July 4, 1900. His poor teenage mother, Mayann, had come up in a world near the soil. In her scattershot, uneducated existence (according to the 1910 census, she could neither read nor write), she had enough trouble keeping the wolves away, let alone keeping accurate records.

Louis’ final clarinet player, Joe Muranyi, once told me, “It is a miracle that he grew up to be as loving and, in his own way, sensitive, and all that, out of such a tough environment. Criminals, murderers—he wasn’t that. He could have been so bitter, racism tearing him up. But he was such a unique person that I think he overcame it.” And Joshua Berrett has called Louis “a human being of ebullient personality and often irrepressible humor, yet with a core of solid common sense.”

Berrett’s words recall a core principle of the Declaration of Independence. The idea that “All men are created equal” derives from Scottish common sense (or moral sense) realism—what Allen Jayne called the “cornerstone” of Jefferson’s political theory. “Equal,” in this context, means equal in men’s possession of common sense—to grasp self-evident truths. It refers to man’s inherent faculty to comprehend the common good. As Jayne describes it, “…each individual has a moral sense or conscience, which along with reason gives the capacity to easily detect the moral laws of nature independent of God….”

Louis exemplified this common—and democratic–sense. He was asked in an interview, “Louis, you’ve been described as a musician, sometimes as a singer, an entertainer, even a comedian. You’ve always had a wonderful relationship with an audience. How would you describe yourself?”

Louis response—immediate and ingenious: “As one of them. I’m just the same as one of those people out there in the audience.” The late Danny Barker had his own take on this: “In (Louis’) dressing room, you could find everyone from senators to street sweepers—and he would give each one equal attention.”

Phoebe Jacobs, late VP of the Louis Armstrong Educational Foundation and who knew Louis well, recalled, “I would say his ability to communicate with people came from this great passion he had for love of fellow man. His dedication to making people happy.” In fact, “I’m there in the cause of happiness” was Louis’ watchword.

Some of this may have come from his years with the hardscrabble Karnofsky family in New Orleans. Nick Karno, last member of that brood, told me, “In New Orleans, we never treated black people like black people. They were just people. They ate with us and slept with us. It was accepted.” As Louis himself reported toward the end of his life, with the Karnofskys, “I began to feel, like I had a future and ‘It’s A Wonderful World’ after all.” 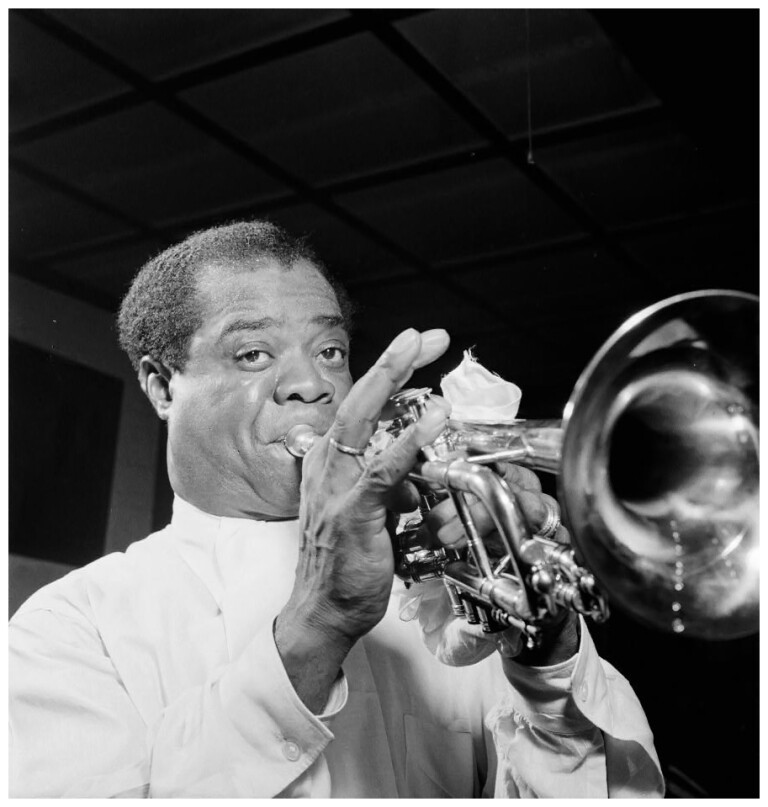 Michael Cogswell, former director of the Armstrong House Museum, related this experience: “One of my favorite stories of his everyman quality came from a lady in Toronto, where Louis had a week-long gig. She and her husband were able to talk their way backstage. They got their nerve up and invited Louis to their house for dinner later that week. He accepted, and they were thrilled.

“The next night, the mayor of Toronto came into the dressing room with a big entourage, said, ‘ Mr. Armstrong, we’re going to have a banquet in your honor and present you with the key to the city. It’s this Thursday night at 7pm.’ The lady was in the dressing room, and her heart sank—that was the same night he had agreed to come to her house for dinner. What did Louis say? ‘I’m sorry Mr. Mayor, I already have plans that evening. I wish you’d asked me sooner.’

“There was a reporter in the room. He went over to the lady and her husband and asked, ‘Who are you guys?’ They said, ‘We’re nobody.’

“And that’s how Louis was,” Cogswell added, “—without pretension. Treated everybody the same whether you were a men’s room attendant or a head of state.” 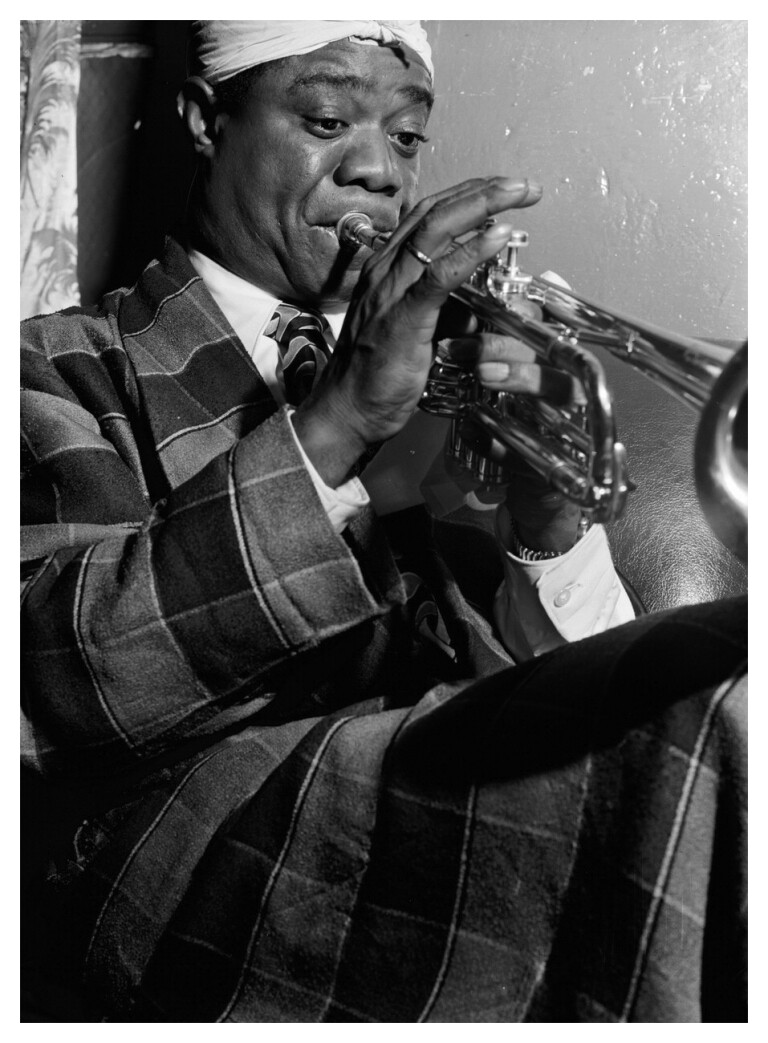 Here lies the core of moral sense—that we are all in this together. Independence needs mutual understanding, lest we get anomie. Hence the jazz community paradigm. In the words of my old teacher W.A. Mathieu, in jazz, “Everybody’s playing a different song, but everybody’s playing the same song.” E Pluribus Unum.

So let’s come back to Liberty Valance. Why, rather than the facts, did the editor want to “print the legend”? For a journalist, it would seem antithetical. But he chose the greater story—about a man who had risked his life in service to freedom and to the rule of law—our national ideal.

He thus echoed a moral sense whose roots go back as far as Plato’s Republic and the “Noble Lie.” Plato’s idea was to create a new blueprint by which to organize society for the best of all possible results, to “maximize the happiness of the community as a whole.” The goal was for citizens to “keep themselves and their cultural education intact, and display rhythm and harmony throughout.”

In this vein, the Karnofskys surely helped Louis, by showing him that, in the spirit of individualism, and regardless of the poverty around him, he could create a new “blueprint” for himself, summoning his own rhythm and harmony. “The Karnofsky Family kept reminding me that I had Talent—perfect Tonation when I would Sing,” he wrote. And, “They could see that I had music in my Soul.”

Did Louis’ “mythical” birthday mean he saw that greater blueprint—the “Big Noise”? Ricky Riccardi, Director of Research Collections at the Louis Armstrong House Museum, told me he has “listened to Louis give his [July 4, 1900] birthday a thousand times, but he never seems to infuse it with any deeper meaning.” Yet through his horn and voice, Louis seems to have proclaimed his personal independence, a place in his time. When I hear the first 16 bars (and especially the first 8) of the Hot Five’s “Cornet Chop Suey” (recorded for Okeh on February 26, 1926), I hear a man set free, running for the hills. He thus re-defines July 4th.

Dan Morgenstern, former director of the Institute of Jazz Studies at Rutgers, told me that Louis’ July 4 birth date “certainly meant something to him, and in any case is so appropriate that the messing with it has never been accepted by me, nor almost all the Louis fans I know. Even if it should be proven mythical (which IMO it is not), what he thought is what matters, and he never doubted it.”

And by all evidence, Louis never did doubt his playing. Listen to his final solo on “Riverside Blues,” recorded for Okeh with King Oliver’s Creole Jazz Band on October 26, 1923, and you hear a young man declaiming triumph.

Thus he gives us an original, in vivo musical paradigm, borne of personal and community emancipation, in a multi-color city where, according to Sidney Bechet, the music “was like waking up in the morning and eating…natural to the way you lived and way you died.”

As Edith Hamilton has written, “In the earliest Greek poets a new point of view dawned, never dreamed of in the world before them, but never to leave the world after them.”

Louis’ ancestors had been slaves. But as the great Ralph Ellison wrote, “The blues, the spirituals, the jazz, the dance, was what we had in place of freedom.” 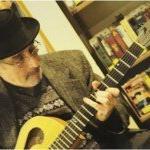