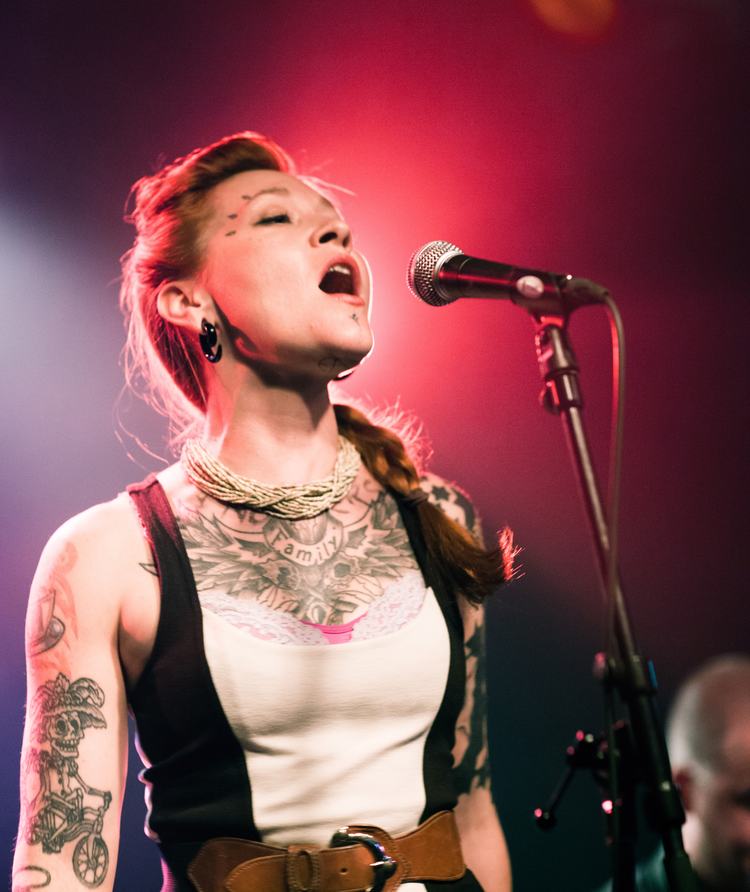 By the time I sat down for a chat with Meschiya Lake, in mid-October, I’d been keen to meet her for a long time—since 2019 at least. But our calendars didn’t line up for a while, then arranging a date sort of fell off my to-do list and it wasn’t until 2022 that I tried again. When I finally managed it, she was packing for a gig in Spain. The trip was a rare foray outside her adopted home of New Orleans, now that she’s mom to a young girl. And why go anywhere else, as someone who sings jazz—for she doesn’t call herself a jazz singer—when “the tour comes to you” (Meschiya’s words) in the form of 19 million music-hungry visitors a year?

I went into our long-awaited parlay expecting to talk music, but the conversation ended up being just as much about politics and the human experience. All are closely intertwined for Meschiya, who lectures on jazz and blues history as well as leading the critically acclaimed Meschiya Lake and the Little Big Horns. “For me, music has been mental health during very hard times,” she told me during our video chat. “It’s kept me going when I thought I couldn’t, because I’ve heard someone singing about the very same thing.” Her own singing career effectively began aged nine, when she won an open mic contest and bagged herself $500. It led to a regular gig at the South Dakota Opry, for which she was paid $25 per song.

But the young chanteuse had not yet fallen for jazz or the blues. Growing up in South Dakota—home of the National Cowboy Song and Poetry Hall of Fame—she was raised on country. “I won that opry contest with Patsy Cline’s ‘Walkin’ After Midnight,’” she said. “I still remember the tunes I sang at those gigs, and they were all country tunes.” Country is what Meschiya and her mom would listen to while riding in their pickup truck. “My mom also listened to a lot of Dolly Parton and Neil Diamond,” she added. “I still like to do country tunes with traditional jazz instrumentation because the song forms are kind of the same, AABA tunes. So it translates very well and is great fun, blending my two major influences together.” 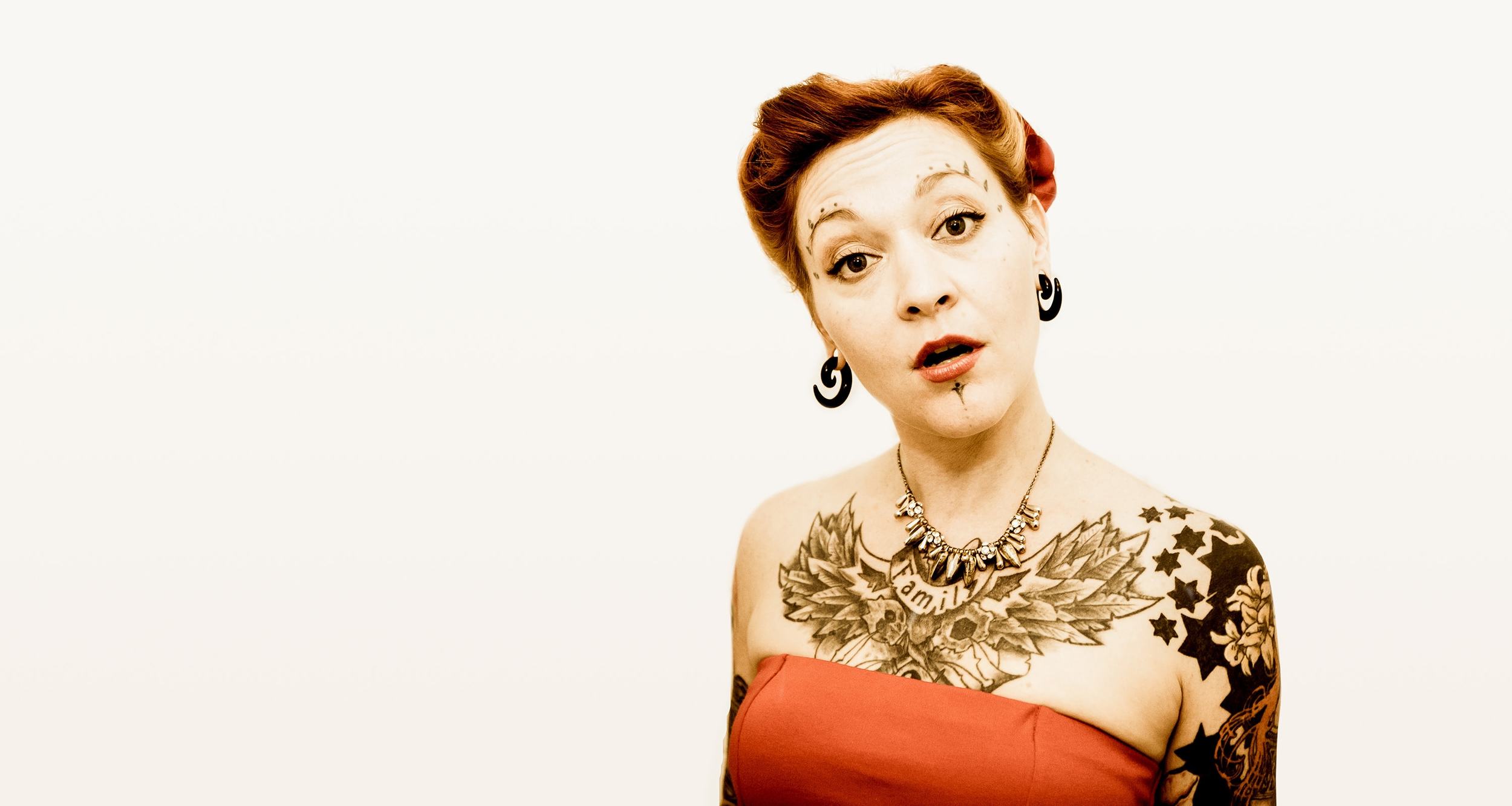 It was in her teens that Meschiya became more acutely aware of jazz and the blues. Which artist got her hooked? “Bessie Smith, definitely,” she said. What was the context? “I was in a subculture of folks who hopped trains,” she answered. “A lot of them were in old-time bands and we would sing songs around the campfire at night. Those old-time songs led me into blues and jazz—I was listening to Elizabeth Cotten, then Bessie Smith, then Artie Shaw and the big bands. It was just kind of a natural progression.” It was Smith’s “power and authenticity” which appealed to Meschiya—characteristics for which her own voice is often praised. “I liked to explore and learn about the things I was listening to—what life was like for the people making this music,” she said. “I learned more about Bessie’s life and developed a closeness with her.”

But why not Marvin Gaye, Nina Simone, or Beyoncé? The appeal of old-time Americana was a combination of compelling lyrics, pleasant melodies, and blues-tinged harmonies, Meschiya explained. “I was attracted to this music because of a mutual understanding,” she said. “A happy melody with dark lyrics was a healthy way to express the emotions I was feeling—to exorcise the darkness in a joyful way. Because if you don’t let those feelings out, they live in you. It’s like the New Orleans jazz funeral: the music is a dirge until you put them in the ground, then it becomes a celebration of someone’s life.”

Meschiya is most often referred to as a jazz singer. Just look at the plaudits she has won: Sun Valley Jazz Festival’s First Lady of Jazz (2013), Danish Music Award for Vocal Jazz Album of the Year (2019), and OffBeat’s Best Traditional Jazz Artist (several times) to name but a few. Is this how she defines herself? “No,” she replied. “I’m just a musician—I appreciate all genres.” Putting singers in boxes is pure marketing, she agrees. “I guess I’m best known for being a jazz singer, but I don’t consider myself just a jazz singer.” In fact, classically trained Meschiya has also sung for orchestras and ballets, as well as punk bands. “It’s all music to me,” she explained, “so I don’t categorize myself. I like all music except techno, because I like visceral things I can hold on to. But If you say you only sing jazz, that suggests you can’t sing blues. It’s a limiting thing.” 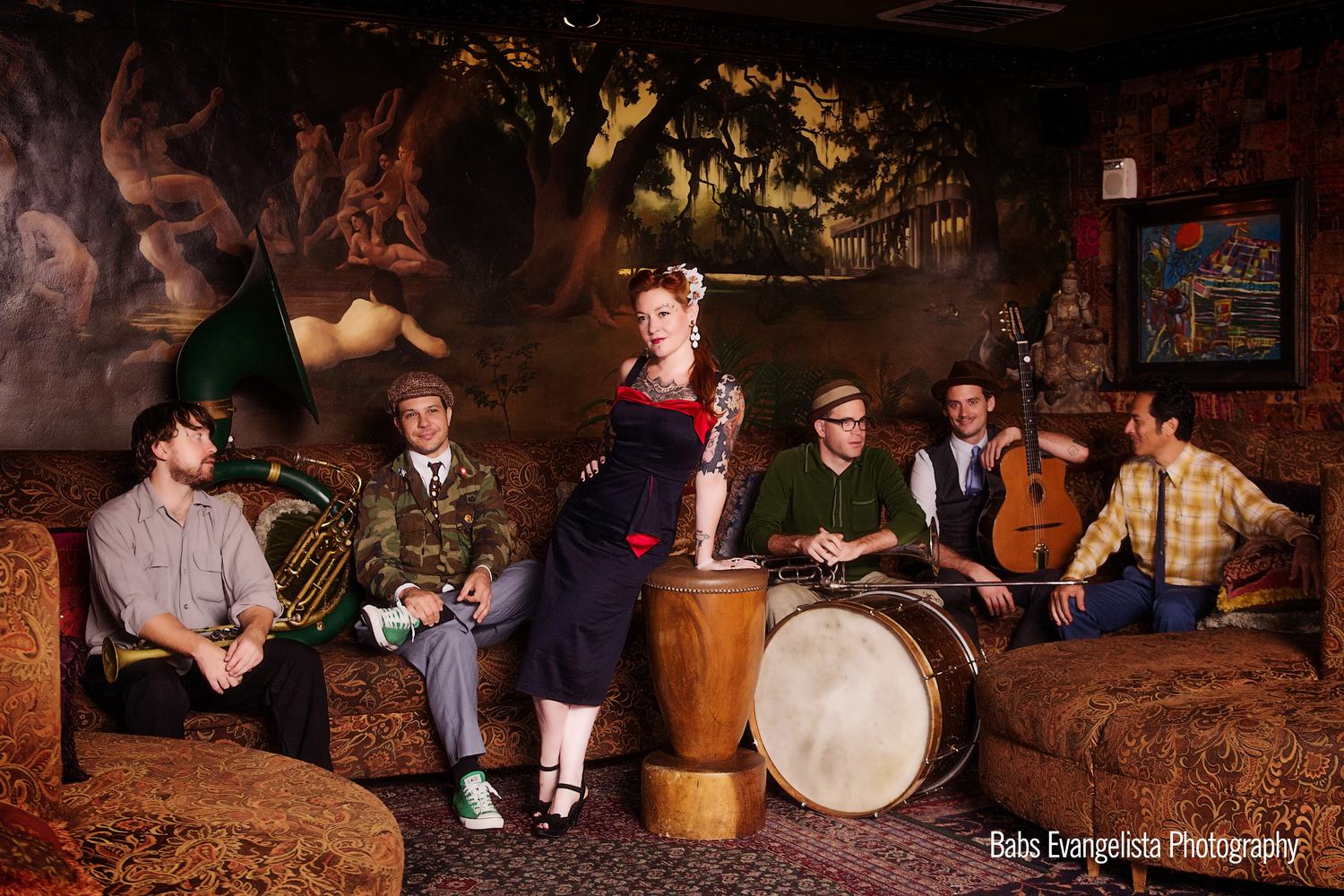 I’m always curious to know why anyone now living would perform or even listen to music made a century ago. Often there’s an element of nostalgia—but Meschiya insists this music is contemporary, as much as it is historical. How can something so old also be modern, I asked from my suburban home in rainy southern England. “You’d have to come and find out,” she replied. “Over there you just hear it in old recordings, but there’s a place where it’s everyday life—New Orleans. You can’t walk down Frenchman Street without hearing it, without seeing people playing it on the corner.” The themes of that old music are still relevant too, she added. “Take racism—just look at the murder of George Floyd. Or misogyny—I can’t even get an abortion in my home state now. These are very much still contemporary issues.”

Here in the UK, we’re even further removed from the US of a century ago. People tend to see jazz and blues as historical, exotic, and fun: on VE Day they don GI uniforms or tea dresses, drink Budweiser, and do anachronistic stroll dances to Glenn Miller numbers. This romanticized role play couldn’t be further from Meschiya’s mind: although she does rock a vintage updo and cherry red lipstick, it’s not a costume or a gimmick. Her music comes from the heart. “I relate to it from life experience,” she said, “being on the road, being in terrible relationships—from living. It’s a far cry from just fashion: performing this music is a soulful need, it’s not just about poodle skirts and pompadours.” 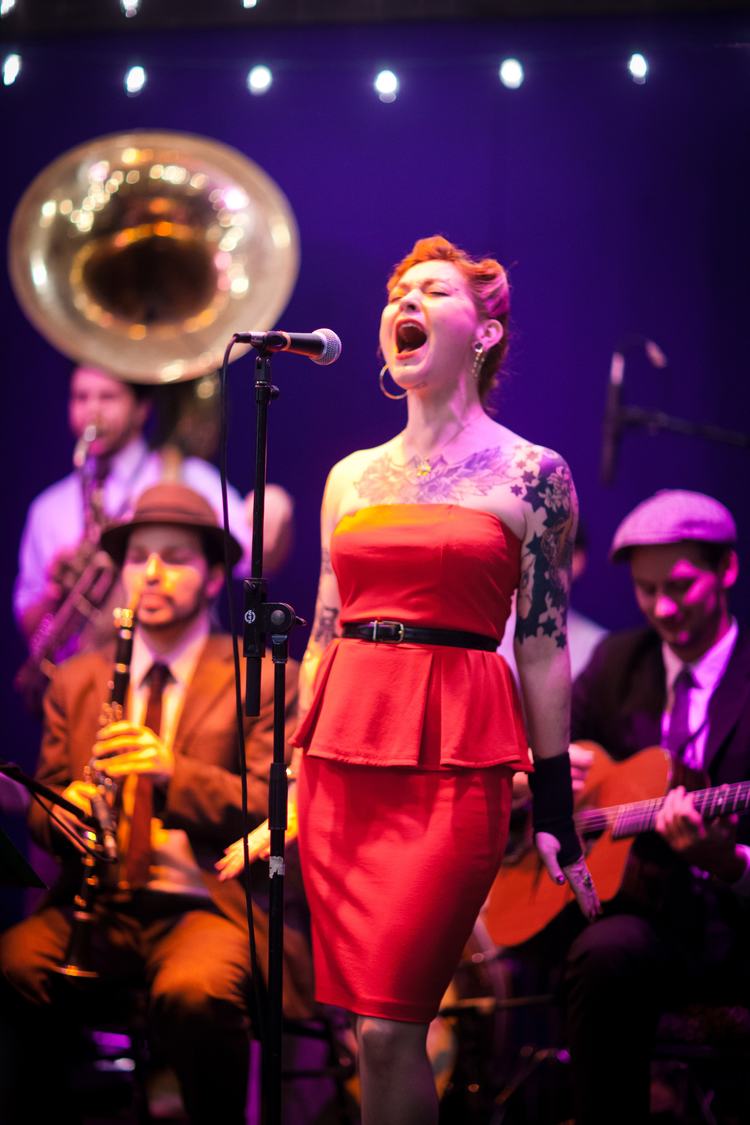 The average listener would do well to be more mindful of this music’s origins, Meschiya said. Often invited to teach swing dancers about the roots of swing music, her lesson plans don’t always go over well. “When they veer towards race, they tend to be shut down because organizers think white people just wanted to come and dance and have fun,” she explained. It’s apparent, even on our grainy video link, how much this upsets the singer. “That is the basis of colonization,” she said, “taking the joy without acknowledging the pain.” Berlin’s Are You Syncopated!? Festival was more onboard with her ideas. “I was very happy with them,” she said, “because they made it a safe space for women and people of color. I’m not saying be a killjoy, but educate yourself and try to understand people’s experiences.”

She continued: “Jazz was born in Congo Square. On Sundays in New Orleans, slaves had a day off to go and dance, sing and trade wares. This was where African rhythms and movement combined with European instruments—that’s how jazz came to exist at all.” I was curious to know how the average listener could be a more educated and respectful jazz fan. “Read a book,” she replied. “If not that, watch a movie—the last couple of years have seen more historically accurate movies released like The United States vs Billie Holiday, which tells how she was more or less killed by the federal government. So you don’t have to dig that deep any more.”

Empathy with one’s fellow jazz fans is also crucial, she added. “If you’re around people of color in the music or dance scene, and they’re telling you their experiences, listen to them,” she said. “The pandemic has been kind of good, in the sense that it put people outside their comfort zones. You know, Black Lives Matter had been going for years—but people were glued to the news and had to listen.” For Meschiya, this music always has been and always will be political. “I came from the punk rock scene and it was very political, not just a fashion,” she said. “It was about historical truths which have been hidden from us. So I think it’s a very good start that these things are becoming more a topic of conversation now.” 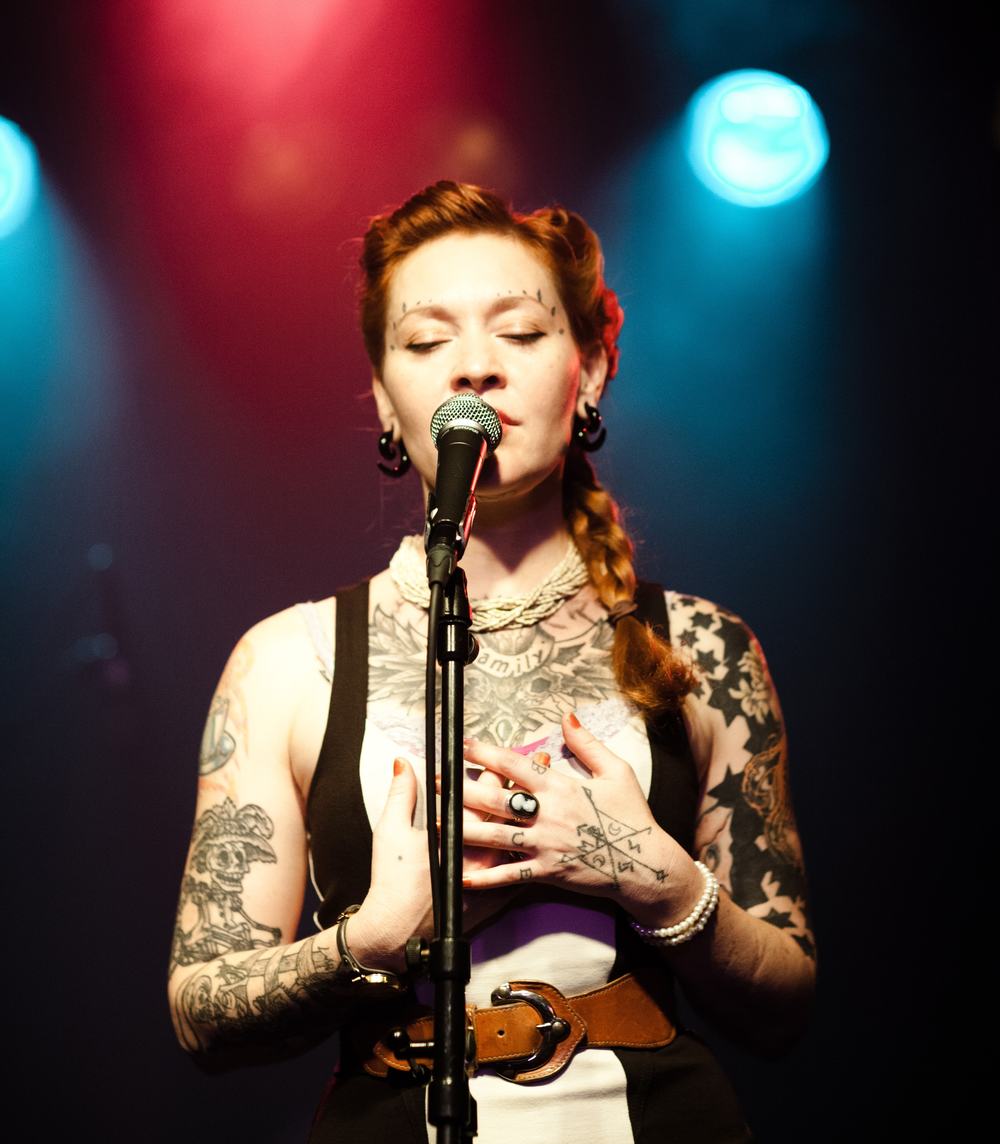 I wondered aloud whether this dedication to respectfulness was the secret to Meschiya’s success. “I don’t think of myself that way, how those awards describe me,” she said. “It’s nice to hear, but every day there’s more I want to achieve.” Does she not consider herself successful then, I asked. “That depends how you define success,” she replied. “I don’t compare myself to other people or worry too much about money—just being happy with myself and my life. Being comfortable. Making my kid happy. Now I have to raise this other human and support her through my art, which I guess I am successful at: there’s a roof over our head and there’s food in the fridge and I’ve got good people to play music with.”

The singer clearly takes respecting her forebears very seriously, but that’s not to say it’s all doom and gloom. “You can tell the difference between a tune which was written to be fun and one which is heart wrenching,” she said. “It’s Fats Waller singing ‘Your Feet’s Too Big’ versus Bessie Smith singing ‘Electric Chair Blues.’ I like to do both.” With clubs and festivals clamoring for the singer to grace their stage, fans of Meschiya’s music have plenty of opportunity to see her do so—they might just have to visit New Orleans, to do so.