When Yvonne Marther Fasnacht died—on Sunday, 13 November 2011, aged 101—Variety.com carried her obituary. The top entertainment website remembered a pioneering nightclub owner who helped create a safe haven for gay and lesbian music fans in 1940s New Orleans, running Dixie’s Bar of Music with her sister Irma Fasnacht from 1939 to 1964. Dixie’s was “where rich and poor, gay and straight felt comfortable,” the obit-writer said, calling Fasnacht “one of the era’s great personalities in the French Quarter.”

The New Orleans Times-Picayune carried a longer tribute, also focusing on the entrepreneurial activities of the woman known as “Miss Dixie”—a “fun-loving, no nonsense proprietor or two New Orleans bars where gay men and lesbians could socialize comfortably long before anyone thought of coming out of the closet.” It noted that “everybody who was anybody ended up at Dixie’s”—including famous authors, Hollywood stars, and even senators—though the respectable hostesses “didn’t allow any hanky-panky at all.”

Neither news outlet made much of Fasnacht’s former occupation, one which she continued even while managing the entertainments at a thriving nightspot (leaving Irma to handle the finances). For Miss Dixie acquired her popular moniker not as a nightclub boss, but as a swing musician. 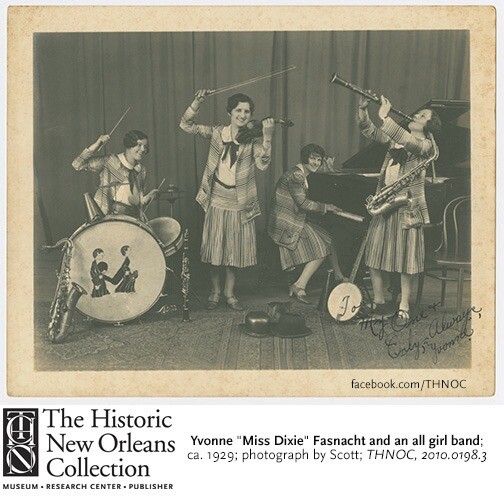 Yvonne Fasnacht was born in 1910 on Laharpe Street, in a working class area of New Orleans. Her parents—Julia Almont and Caroll P. Fasnacht—traced their ancestry back to Swiss, German, and French origins. Julia died of brain cancer when Yvonne was aged eight or nine, leaving Yvonne’s older sister Irma in charge of the household while their father was out working as a salesman, bartender, hotel night manager or drummer. Yvonne shared her father’s musical interests, studying clarinet (alongside drawing) at Francis C. Nicholls School, where classmates included Boswell sisters Connee, Martha, and Vet.

Fasnacht found work in both illustration and music, designing greeting cards during the day and playing with the all-female Harmony Maids by night. Torn between these two professions, it was a chance meeting which set her off on the musical career eventually overshadowed by her impresario role. To help her father pay the bills, Irma took in lodgers at the family home—generally young women arriving in or passing through the city for work. These lodgers included an all-girl band called The Smart Set, who were in town to play the Orpheum Theater. When they hit the road once more, they took Yvonne with them.

It was The Smart Set who named Yvonne “Miss Dixie” on account of her Southern accent (and because she had never seen snow before gigging in Pittsburgh, according to NOLA.com). But her seat was barely warm when the band broke up, shortly after Prohibition was revoked in 1933. Fortunately, all-girl band manager Gene Austin had seen Fasnacht play in Pensacola—and he liked what he saw. He offered her a spot supporting big band the Bricktops, a successful all-female outfit with upcoming engagements back in Fasnacht’s hometown.

Yvonne, trumpet player Judy Ertle and pianist Betty Giblin comprised a trio which played venues’ smaller rooms, while the Bricktops entertained in the larger spaces. Later they played at the Little Ritz, which was a cocktail lounge near the St. Charles Hotel on St. Charles Avenue. At some point the trio picked up bassist Maxine Phinney and the all-female foursome hit the road as a swing quartet, billing themselves variously as the Sophisticates of Swing or the Southland Rhythm Girls. Engagements included Chicago’s College Inn and New York’s Astor Hotel. They later became a house band at New York club Leon and Eddie’s (on 52nd Street), gracing its stage for six months at a time.

It was here that a movie scout spotted the women, arranging for them to play in a Universal Pictures musical short called Speedy Justice. The eighteen-minute piece was directed by Milton Schwarzwald, a prolific producer and director of movie shorts who oversaw almost 150 such projects from 1935 to 1946. (He also composed for music horror-comedy Abbott and Costello Meet the Killer, Boris Karloff, and other features.)

Starring Eddie Foy Jr. (who would go on to appear opposite James Cagney and Ronald Reagan), Speedy Justice was shot at New York City’s Biograph Studios by Mentone Productions. In it, “hammy actors perform for the judge to get out of a traffic violation” (according to one Turner Classic Movies forum user)—it seems that little other information about the picture, or Yvonne’s involvement in it, survives.

In 1938, DownBeat predicted great success for “Betty Giblin at the ivories, Judy Ertle blowing a hot trumpet, Maxine Phinney slapping the bass, and Dixie Fasnacht hitting ’em high on the clarinet and supplying the vocal swing.” (Giblin was eventually replaced at the piano stool by Ohio native Dorothy Sloop, with whom Fasnacht would record her one-and-only album Sloopy Time in 1957.) But events in New Orleans would precipitate another career change for Miss Dixie—one which would really make her mark in the city’s (and the LGBT community’s) history books.

Back home, Caroll had died and Irma had opened Dixie’s Bar of Music at 204 Saint Charles Avenue, near the cocktail lounge where Yvonne used to play. The sisters ran it together from 1939 and it became a popular spot for servicemen to come and catch live Dixieland jazz. (Tennessee Williams, Truman Capote, and Rock Hudson were reportedly also customers.) Yvonne was amongst the musicians who played there regularly, joined by the likes of bassist Joe Loyacano.

Times-Picayune journalist and Dixie’s regular Lyle Saxon wrote of Yvonne’s skill as a musician and a hostess, noting that she could “do three things at once: she sings, she plays with apparently carefree abandon, and she exchanges jokes with the guests,” and adding that, from her perch on the high bandstand, “nothing escapes her notice.” (The ever-modest Miss Dixie said of her own playing: “I’m not a good musician, but I get a good tone.”)

Forced out by their landlords after the Second World War, the Fasnachts took their business to 701 Bourbon Street (now home to club The Cat’s Meow). As with their previous venue, both men and women musicians were welcome on stage. This was not the situation when Yvonne recorded the one LP bearing her name—the aforementioned Sloopy Time, by “Dixie and Sloopy.” Record label Golden Crest was eager to slap the “all-girl” label on the disc, so regular bassist Johnny Senac was out. In came drummer Maeceil Peterson instead: Fasnacht recalled her as talented, but a departure from the trio sound she was used to.

The record sported swinging small-band renditions of classics like “I’m in the Mood For Love” (#1 below), “Georgia On My Mind”, and “Lazy River.” (#2 below)

“Little Lulu’s in Love” was written by Sloop and features Yvonne singing. Her voice is deep and rich—if a little off-key, in places—but sadly we don’t get to hear any of her clarinet. The video link does include historic shots of Yvonne’s regular Dixie’s trio, backed by a thirty-foot Javier Gonzales mural which celebrates contemporary music stars, so it’s definitely worth a look.

Dixie’s clients—many of whom faced persecution as LGBT—were a loyal bunch and the Fasnachts were loyal to them in return. When a gay carnival krewe which frequented Dixie’s was busted by the vice squad at a private party in 1962, it was Yvonne who went for their bail and got them out of that rotten jail (as Louis Jordan might put it).

Two years later the sisters sold Dixie’s and bought a cottage on Bourbon Street, where they held annual Mardi Gras parties on the porch. (Quasi-prophetically, Fasnacht is German for Shrove Tuesday, a.k.a. Mardi Gras.) In 1989, Yvonne was one of two Honorary Grand Marshals for the 19th New Orleans Gay Pride Parade.

Irma died in 1993, aged ninety-one; Yvonne was honored Lifetime Achievement Award at the Gay Appreciation Awards (GAA) Gala in 1997 and lived until her nineties on Bourbon Street, in the heart of New Orleans’ jazz culture—where she had always been. Neither sister ever married and rumors about their sexuality abound.

Regardless, Yvonne Fasnacht’s first love (and first profession) was not managing New Orleans’ first gay music venue—it was playing jazz. Sadly, she only made the one record and copies of that are hard to find. Still, Miss Dixie’s talent with a clarinet and a song ought not to be forgotten—however important her other accomplishments.

Do You Know What it Means to Miss New Orleans?- Dixie and Sloopy, from Sloopy Time

The author is indebted to music historian Sherrie Tucker for her thorough research, culminating in the ever-fascinating and always-useful National Parks Service paper A Feminist Perspective on New Orleans Jazz Women.