When looking at music history, it is easy to focus on the canon—artists of undisputed importance who more often than not have achieved some kind of superhuman status in the minds of musicians and scholars alike.

However, there is danger in the simplicity of this kind of thinking; attributing vast musical changes to a few can blur out contributions that others have made, relegating them to obscurity, and causing their contributions to be all but forgotten.

One such flaw is the idea that the syncopated musical growth that caused what we now know as Jazz was solely a New Orleans affair. People will say that New Orleans had this beat, or that special combination, but the fact is that while New Orleans produced many of Jazz’s finest musicians, the growth of Jazz itself did not only occur in that city.

Indeed, the “modern” Jazz band of 1917 was a Chicago creation, as the Original Dixieland “Jass” Band’s first iteration, Stein’s Dixie Jass Band, were forced to add a piano to appeal to a northern audience! And the name Jazz wasn’t even a thing in New Orleans when “Livery Stable Blues” came out.

The combinations of culture that led to Jazz did not only originate in the Crescent City. They were occurring concurrently in places like San Francisco’s Barbary Coast, Memphis’ Beale Street, London’s Ciro’s Club, and in the dives around St. Louis.

But this historical transitional or “gray area” period from Ragtime to Jazz that occurred across the nation is overlooked in Jazz history, and thus isn’t easy to track, especially when there aren’t phonograph records of it. Thus, the sounds of these other influences, the other Jazz, have been relegated to dim photographs and distant memories—until we found the records made by Walter Gustave “Gus” Haenschen (1889-1980). In discovering Gus, we discover so much more. 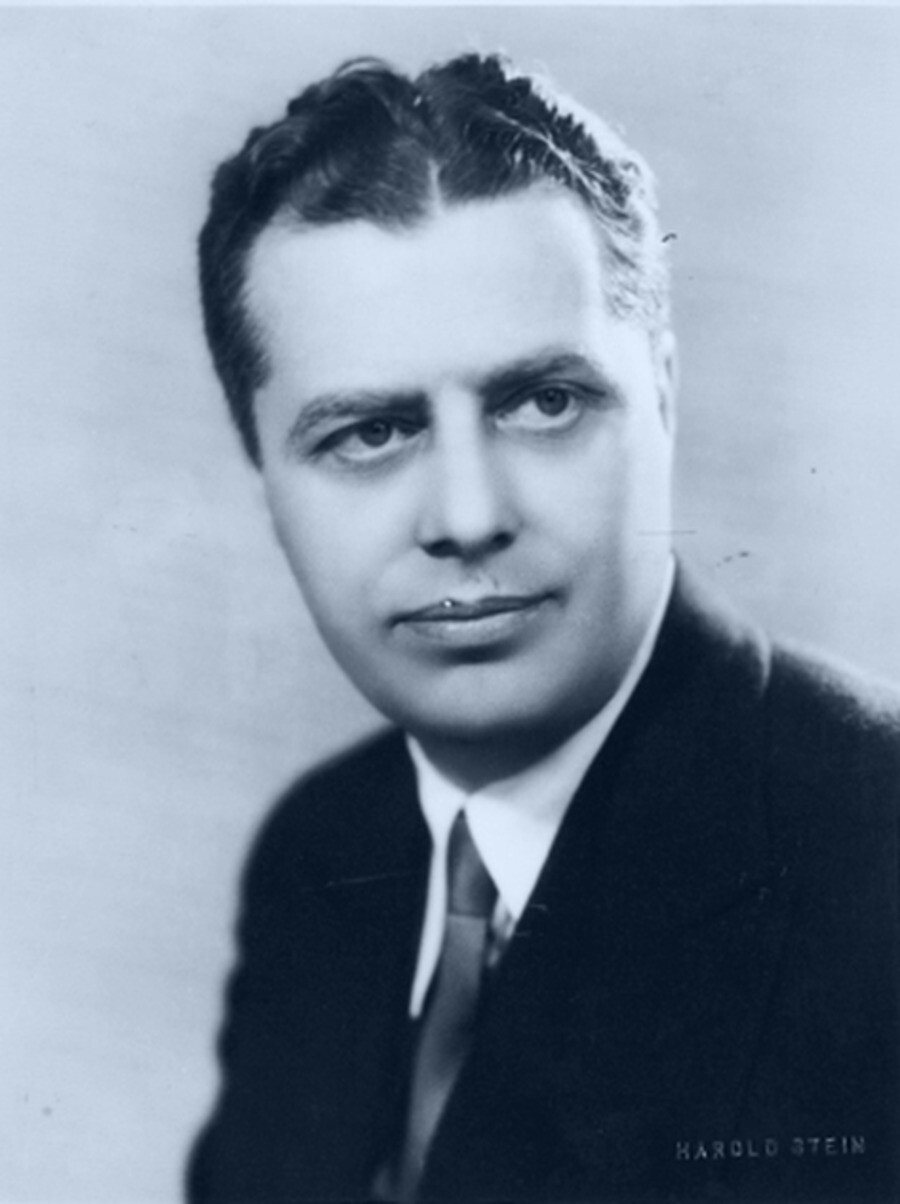 Gus Haenschen was born in St. Louis, Missouri, and there he led a popular dance orchestra throughout the 1910s. The group made six curious records for the Columbia Phonograph Company’s Personal Series (i.e., they were vanity records to be sold to fans and potential venues) in 1916.

A closer look at the titles reveals that the repertoire choice of the band was not unlike many later Jazz bands; “Maple Leaf Rag” (think NORK, Halfway House Orchestra, and so many others) “Honky Tonky (aka Down in Honky Tonk Town)” (think Louis and Bechet ca. 1940), “A Bunch of Blues” (a multistrain composition that constitutes half of “Sunset Medley”—think Original Memphis Five or W.C. Handy’s Orchestra), and more.

Then add to that the fact that Gus and the gang played alongside Black musicians all around St. Louis, and that Gus himself studied with Scott Joplin, who instructed the young pianist on the importance of “swinging” on the beat (yes, you read that correctly).

Then consider that this was a working band from St. Louis. Not New York. Not Chicago. Not New Orleans. St. Louis. They represent an anomaly of the highest proportion: an all white, Middle-American dance orchestra with unusual instrumentation (which, might I add, was difficult to record at the time) traveling to New York twice to record. 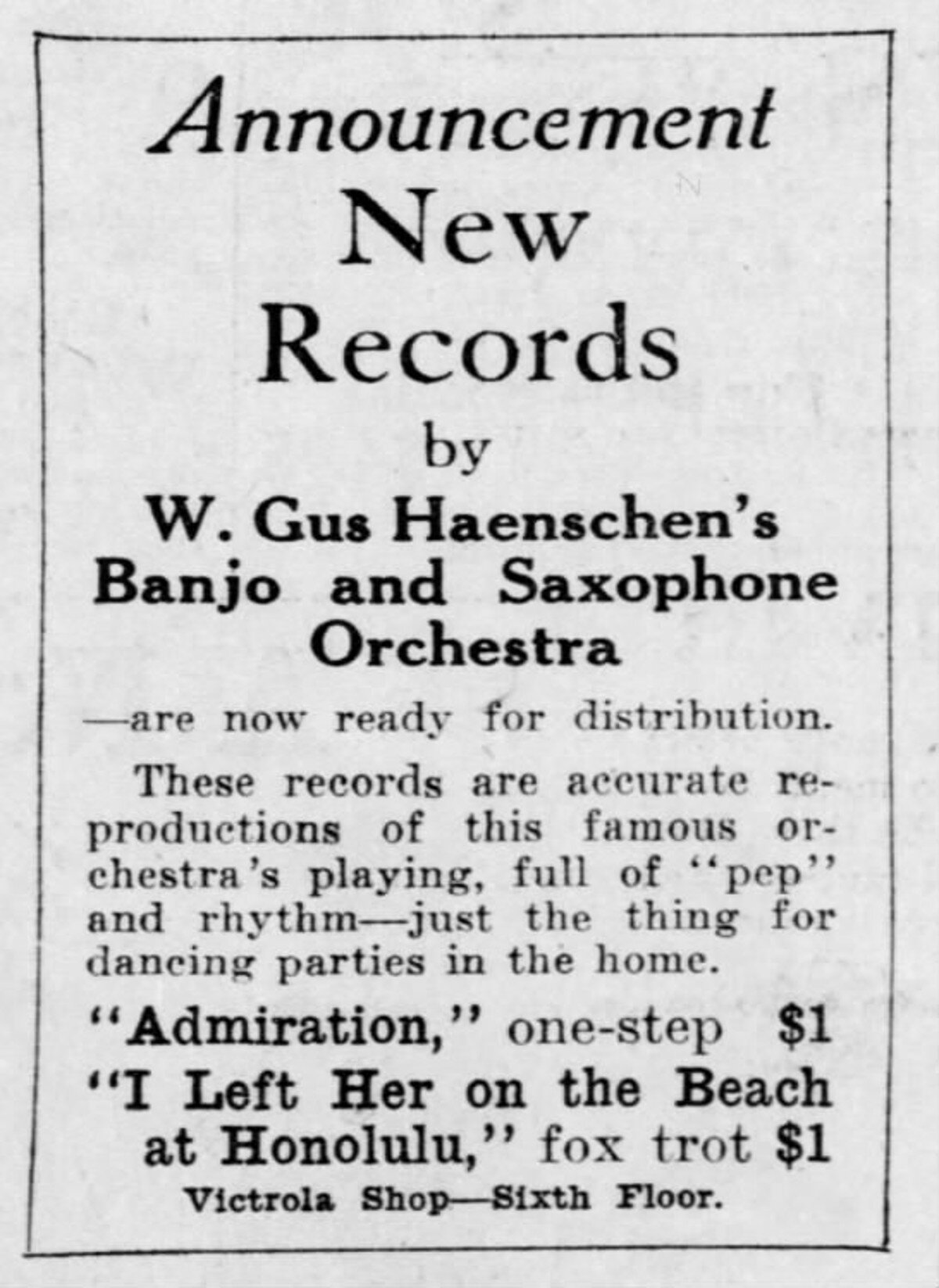 They offer a snapshot into an unrecorded world of music that was occurring in the United States during that era.

This wasn’t a group of polished studio musicians recording “safe” versions of what the recording A&R men thought would sell. This was a working St. Louis band: rhythmically progressive, musically adventurous musicians playing distinctive tunes full of inspiration (even if, at times, unhinged).

Consider “Sunset Medley” one of the only sides to ever have been reissued. That side alone reveals an incredible performance ripe with improvisation, a swinging lilt, solo breaks, and the kind of melodic embellishment that one would associate with something nearly a decade later and which characterize jazz at an atomic level.

Some people, like David Sager and Jim Drake, have known about the records for awhile. A couple are even listed in Rust. But I must confess, I never bothered to look into them until David Sager showed me “Sunset Medley.” 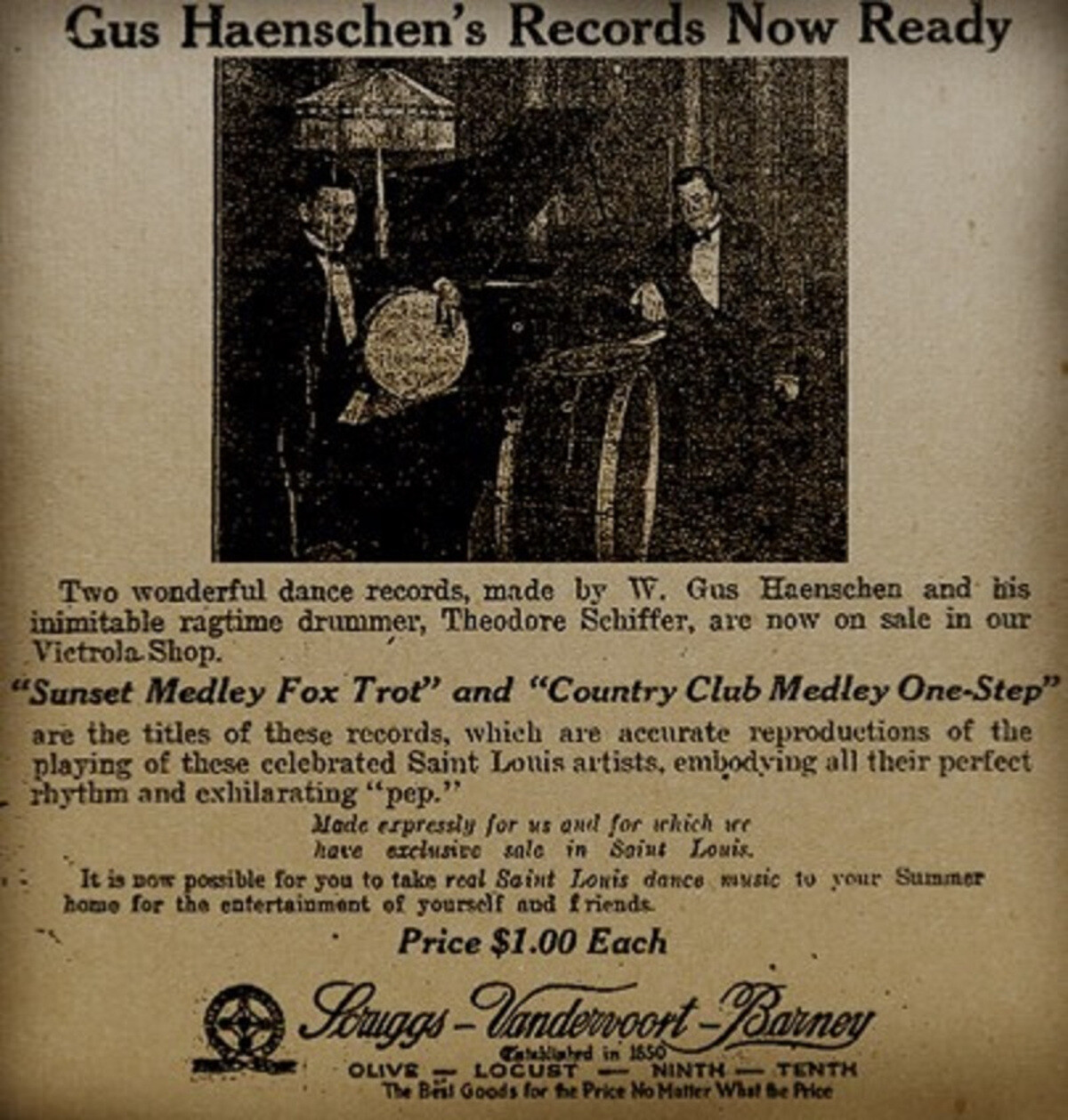 When I started working on an upcoming album recreating the music of college jazz bands of the ’10s, ’20s, and ’30s for Rivermont Records with the Original Cornell Syncopators, my pal Ed Clute put me in contact with Drake for the purpose of learning more about these bands.

As it turns out, Jim told me that Gus’s band for the six sides developed from his college band while he was at Washington University in St. Louis, and that he had studied with Scott Joplin while in high school. This really interested me, not least because this meant Gus’s band was probably the earliest collegiate hot band to record.

I did some more digging and what I found shocked me. Gus turned out to be more important than a single reissue, or a footnote in the discographies. I learned from Dave and Jim that in the ’10s alone he went from college student to bandleader to publisher to hit maker for the Ziegfeld Follies to Victrola salesman to recording artist to soldier to A&R man for Brunswick.

His life after that was even crazier. He was responsible for recording some of the most influential names in ALL of recorded music: Isham Jones, Charlie Chaplin, Al Jolson, Harry Reser, the Happiness Boys, Frankie Trumbauer, Abe Lyman and many, many more. After that, he went into radio at NBC and CBS, providing work for dozens of musicians during the depression in studio orchestras: Benny Goodman, Artie Shaw, the Dorsey Brothers, Jack Teagarden, and Leo McConville are just a few. He was even involved in some of the first television broadcasts!

I started looking at other literature, and it became clear that Gus was not braggadocious, and part of the reasoning for his being overlooked was his humility. However, it was also due to the unfortunate politics of post-Great War America where a name like Gustave Haenschen wouldn’t exactly sell records.

Have you ever seen a record under the name Carl Fenton? If it’s on Brunswick, it’s Gus. This combined with the scarcity of the Personal sides means Gus doesn’t get that mention in the books he deserves. Partially self inflicted, partially just by chance. But it’s not all his fault. To many jazz scholars, St. Louis doesn’t have the same ring to it as New Orleans.

As I looked into the records more, I found ads stating that the music was “Real St. Louis Style,” and “Full of Pep.” Gus recalled them as stylistically just, “What they played.” Just like in New Orleans, the music had no name at the time other than “hot ragtime,” or in the case of a 1913 article on Gus’s friend (and fellow St. Louisian) Gene Rodemich’s piano style, “crude and barbaric tunes [that] became less strident, and were decorated and refined with counterpoint melodies which flowed into his mind as he played.” It just happened that in Chicago, the name that folks gave similar varieties of music stuck.

When I finally started locating the few copies of the Haenschen sides in collections across the world (a detailed account of which will be in an Archeophone blog post by yours truly soon), what I heard amazed me. Sock-time, ensemble improvisation, hot out-choruses, and raucous playing was abundant.

They sounded like nothing on record before, not even the James Reese Europe records for Victor. There was an unhinged quality to them—sort of like the ODJB but in a different context. And then I realized, the Haenschen sides were saying the same thing: here is hot new dance music which is not like your grandpa used to play, or like you New Yorkers are used to. Here is the transition. Here is Jazz—happening.

It’s a game changing affair, and a real shift in the canon. But listen to the records, and they’ll tell you everything.

Hear samples and buy the new recording at Archeophone Records.

Also Read: The First Jazz on Disc: Why Haenschen Swings, by David Sager

Further Reading:  Extensive transcripts from 1970s interviews of  Gus Haenschen about his long career in the music business.