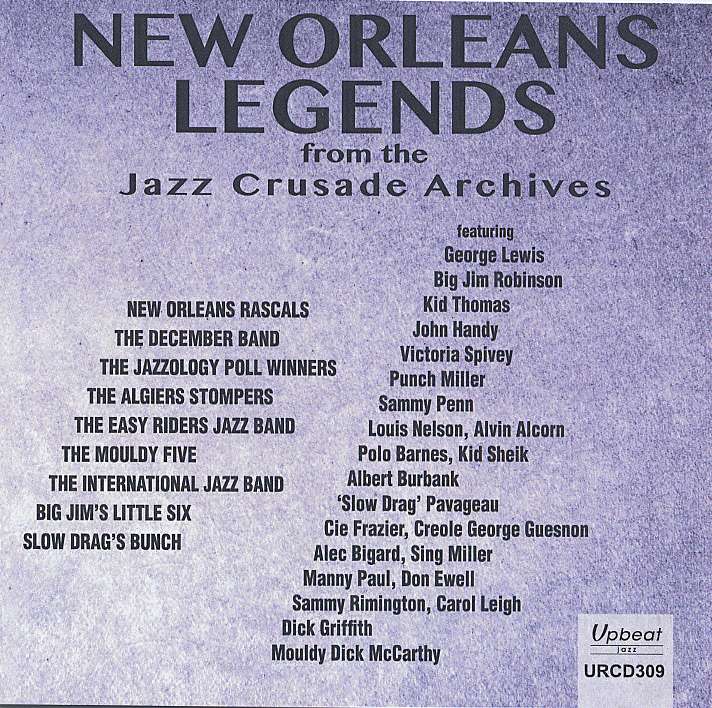 From his teenage years until his death, Bill Bissonnette (or “Big Bill Bissonnette,” as he liked to be known) was a staunch champion of traditional jazz, especially the variety known as New Orleans style, who “practiced what he preached,” becoming something of a “Renaissance man” in the process. He played drums and trombone; hosted a jazz radio program while in the army in San Antonio; later started his own jazz band, The Easy Riders; and founded a record label, Jazz Crusade.

In addition he stayed several times in New Orleans, during which occasions he took trombone lessons from Big Jim Robinson—from whom he undoubtedly borrowed the “Big” he affected—and later drum lessons from Sammy Penn, whom he named as his idol. So he was embarked on a crusade—to save traditional jazz and its early black practitioners from fading into oblivion and to acknowledge and aid those aging musicians he so admired, particularly those who did not migrate from New Orleans, to achieve some recognition and financial reward where possible.

In 1992 Bissonnette published his memoirs, titled unsurprisingly The Jazz Crusade. As part of that endeavor, the book included a CD titled The Best of Jazz Crusade, which was not given a Jazz Crusade catalog number, appearing only affixed inside the book’s back cover. The compilation disc featured many of the musicians that Bissonnette brought up from New Orleans to appear with him in Connecticut and to tour with him, both in the US and abroad. All of the cuts featured these musicians, often along with members of the Easy Riders or, on occasion, the New Orleans musician’s own band, such as Slow Drag (Pavageau)’s Bunch, Jim (Robinson)’s Little Six, or Kid Thomas and His Algiers Stompers. While a number of the tracks had been issued previously elsewhere, some half dozen appeared there for the first time and are now re-released here.

It is that CD that is replicated here, given a new title “New Orleans Legends from the Jazz Crusade Archives” and an Upbeat Recordings catalog number. Those folks who do not have The Jazz Crusade book will appreciate having its CD accessible, thanks to Upbeat Recordings which acquired the Jazz Crusade label. Fans of Kid Thomas Valentine will revel in the fact that eight of the tracks feature Valentine, two having been previously unissued, with his unmistakable trumpet driving his fellow musicians with the flares and growls that were his trademarks. His influence can also be heard on Fred Vigorito on “Struttin’ with Some Barbecue.”

Two of Bissonnette’s particular heroes can be found on several of the tracks: Robinson on trombone on four and Penn on drums on five. Robinson is noted for his frequent use of swooping glissandos, and Penn for his “explosions” of loud accents and cymbal crashes, as well as his love of triplets on snare drum or woodblock. Bissonnette himself is present on a dozen of the fifteen cuts, playing trombone on most but drums on a couple. As might be surmised, he was not averse to a little self-promotion, but given his contribution to the preservation of the music and the well-being of the musicians mentioned above, perhaps it can be excused.

All told there are five tracks with vocals. Although not credited on the inlay or the disc, Alcorn and Barnes attempt a harmonized vocal on the opening number, “Bourbon Street Parade,” with somewhat doubtful success, the harmony tending to elude them somewhat. But the vocal is not the prime reason for their being present: they acquit themselves well on trumpet and clarinet respectively. Similarly, Punch Miller plays trumpet and takes the vocal on “Down by the Levée,” an interesting facet of the vocal being that, following singing the lyric, he engages in a two-bar “call and response” sequence with Bissonnette, Miller scatting a vocal response to Bissonnette’s trombone lead. On “You Rascal You” Bissonnette himself, I believe (since as with “Bourbon Street Parade” no one is credited), takes the vocal, which is on a par with most vocals taken by musicians.

The other two vocal offerings are much better, both being offered by dedicated vocalists. Victoria Spivey joins the Easy Riders band for “Sister Kate,” having taken a hiatus from the music business for a few years but then coming out of that retirement, at which time she recorded “Sister Kate” heard here. Spivey is an old-time blues belter, her singing having a nasal quality to it which does not interfere with her delivery or impact.

The other professional singer is Carol Leigh, who appears with a group led by Valentine, along with Captain John Handy on alto sax and the cigar-chomping Sammy Penn on drums, among others. Leigh is not an earthy blues singer, but she has an engaging voice, with just a touch of vibrato, that projects “Make Me a Pallet on the Floor” quite well.

This compilation will help acquaint those listeners who are not too familiar with the black artists who were part of the traditional jazz revival since it serves as a kind of “sampler” of that cohort. It is also something of a tribute to Big Bill Bissonnette himself and his efforts to secure a place for these musicians—and their music—in the history of traditional jazz. Like all Upbeat CDs, it is available on the Upbeat Recordings web site www.upbeat.co.uk as well as on-line from Amazon.