Olive Brown Empress of the Blues 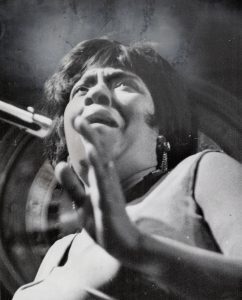 If the name Olive Brown doesn’t ring any bells you can forgive yourself. She wasn’t a Golden Age blues singer or even a chanteuse of the swing era. She was never the frontwoman for a legacy band hopping the globe in the 50s and 60s. Indeed her career as “The New Empress of the Blues” spaned a mere decade, peaking in the early 70s when she was already in her 50s.

Born Olive Jefferson in 1922, and adopting the name Brown for performance rather than matrimonial reasons she had a regional musical career in Detroit, Chicago, and St. Louis beginning in the 1940s. She worked with modern jazz, soul, and early rock n’ roll bands, as a drummer as well as a singer. Then in the late 60s she drew praise fronting Buck Clayton‘s band for a CBC radio performance in Toronto. Recognizing a hunger for someone to authentically revive early blues material she changed her focus to Bessie and Mamie Smith material as the 70s dawned. 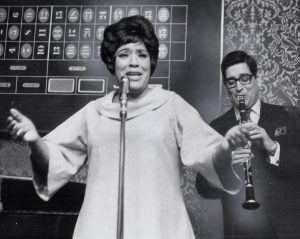 She began making appearances at the St. Louis Ragtime Festival where she was an instant hit. She made the rounds to other festivals in Texas, Memphis and elsewhere. In 1973 she recorded an album for the small traditional jazz label JTP. Titled Olive Brown and her Blues Chasers, the record was widely praised. The “Blues Chasers” were a five-piece borrowed from the Boll Weevil Jazz Band who played heavily on the traditional jazz circuit at that time.

The first ten of 17 tracks on this disc are from the record. Titles include “Empty Bed Blues”, “Aggravatin’ Papa”, “Back Water Blues”, “Gimme a Pigfoot and a Bottle of Beer”, and similarly earthy material.  These are classic interpretations excitingly performed. Particularly on “‘Deed I Do”, the band catches fire. Mike Montgomery dominates on piano, and there is evidence Brown felt most comfortable in a piano and voice pairing going back to her youthful singing in the sanctified church. Her voice and style have authenticity when applied to these songs and it’s nice to enjoy them crisply recorded rather than on scratchy transfers from the early 20s.

The next six tracks were recorded a year earlier in a live set at the King Cotton Hotel in Memphis and released on GHB as Olive Brown Sings! Instead of a full band, she is backed only by Don Ewell on piano and Gardner Hitchcock on Drums. The result feels less like classic blues but more fully captures the skillful nuance Brown was capable of. “Am I Blue?” is masterfully explored with hints of Billie Holiday. Her voice, however, is always her own. 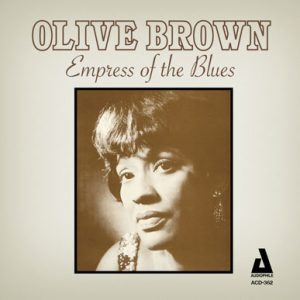 The set has a contemporary jazz party feel. Don Ewell impresses, even performing “Beale Street Blues” as a solo track. Her working relationship with him went back to the Toronto session with Buck Clayton that had first brought her attention in classic jazz circles. The final track, “Bama Bound” was released on another GHB record, Struttin’ with the Boll Weavil Jazz Band.

After her brief time in the spotlight, captured on these definitive recordings, she drifted back into obscurity dying at age 60 in 1982.