Mathematical sticklers may demur, but I take pleasure in declaring the twenties have finally arrived again. The ringing in of a new decade—a twenties that may or may not roar, but will undoubtedly swing—will bring many opportunities to celebrate centennials and deepen our appreciation for the history of syncopated music.

One of the most significant events of 1920 from the standpoint of popular music in the United States was the recording of Perry Bradford’s tune “Crazy Blues” by Mamie Smith and her Jazz Hounds. Its runaway success on the Okeh label made “Crazy Blues” the first significant hit recording in the blues genre. Smith was also the first African American female popular singer to lead a commercial recording.

The disc flew off store shelves in Harlem and racked up 75,000 copies sold in its first month. Some people say it went on to sell a million. I can’t judge the credibility of that claim, but for reference, the U.S. population stood at just a hair over 106 million on the first day of 1920, according to that year’s census.

Historians have often credited “Crazy Blues” with catalyzing the proliferation of so-called “race” records. Its popularity made clear that black consumers now made up a viable market for the recording industry. Whites were already becoming familiar with blues through the compositions of W.C. Handy, particularly “St. Louis Blues” (1914), and others; one of 1919’s biggest record hits was “Blues My Naughty Sweetie Gives to Me” by Ted Lewis and his Orchestra. Sophie Tucker and a handful of other white singers had sung material by black composers in rag and blues inflections.

The charm and power of Mamie Smith’s performance has a great deal to do with why “Crazy Blues” took off. Smith was born in Cincinnati in 1883 and first joined traveling shows while still a child. By 1917 she was a seasoned entertainment professional with experience in Salem Tutt Whitney’s Smart Set musical comedy troupe and as a singer in New York nightspots, such as Barron Wilkins’ Exclusive Club. She had thick hips, a lovely face, and a regal self-presentation that exuded star quality. 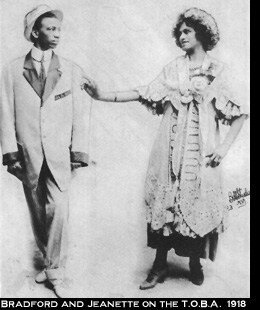 But “Crazy Blues” was just as much Perry Bradford’s triumph as Smith’s. A highly determined showbiz entrepreneur, Bradford is a largely forgotten pioneer of syncopated music. Like Smith, he had taken off as a pre-teen for the tent show circuit after being born in Montgomery, Alabama, in 1895 and raised in Atlanta. He spent a decade as an itinerant performer, songwriter, and theatrical producer in both northern and southern vaudeville. He shared the stage with his first wife, Jeanette Taylor, in the double act Bradford and Jeanette, while leading the Chicken Trust variety company. He also contributed an entertainment column to the Indianapolis Freeman, one of the nation’s most widely read African American newspapers, starting in 1914.

In 1917, about a year after he settled in New York, Bradford hired Mamie Smith to sing with his company in the revue Sgt. Ham of the 13th District. He soon became her manager, and his growing stake in the plump singer’s career appears to have coincided with the deterioration of his marriage to Taylor, who left the company. In 1918, Smith starred in Bradford’s successful show Made [or Maid] in Harlem at the Lincoln Theater on 135th Street off Lenox Avenue. Singing this production’s signature number, Bradford’s “Harlem Blues,” Smith’s cabaret career took flight.

Bradford opened a music publishing company with an office in the Gaiety Theater building on Broadway and 46th Street, where Pace and Handy also had its office. But most days he could be found at the Colored Vaudeville Benevolent Association up on Lenox—the real base from which Bradford plotted his strategic assault on the music business.

It was a competitive trade, to be sure, yet there was a definite sense of collective struggle among the fraternity of African American songwriters. Despite the popularity of “St. Louis Blues,” and the singular success of the comic Bert Williams as a recording artist, Harry Pace came to believe the recording industry was, for all intents and purposes, boycotting black artists. This assessment helps explain Pace’s switch from publishing to recording.

Not only was Bradford in the thick of this fight; he also faced a certain amount of scorn from some other blacks due to the style of music he was promoting. In these years, the blues genre got little respect from what could be termed elite elements of New York’s black music scene. This group orbited around two principal figures: Clef Club founder James Reese Europe—who was shockingly murdered in May 1919—and composer Will Marion Cook, who led the New York Syncopated Orchestra to England to play for King George V, also in 1919. To many of these proto-Harlem Renaissance cultural leaders, Bradford’s compositions bore uncomfortable traces of the stereotype-laden plantation milieu they believed they had left behind.

But he wasn’t called “Mule” Bradford for nothing. He wanted his songs recorded and wouldn’t take no for an answer, despite months of rejections. Finally a white colleague directed him to Fred Hager, recording director at Okeh. When the opportunity arrived, his pitch was ready. There were fourteen million Negroes, he said, who would be likely to buy records made by Negro musicians playing in their indigenous styles. If the records were good enough, many southern whites could be expected to buy them too.

Hager was sufficiently impressed to accept a couple of Bradford’s tunes, but his inclination was to have Sophie Tucker record them. Tucker, however, was under contract to another label, and Hager relented to Bradford’s entreaties to give Smith her shot.

On February 14, 1920, Smith made her recording debut on Bradford’s “That Thing Called Love” and “You Can’t Keep a Good Man Down,” backed by the white studio musicians in Okeh’s house band. The singer was credited merely as “Mamie Smith, contralto.” The label released the disc with virtually no publicity but was pleasantly surprised by its above-average sales. Hager agreed to schedule another session to record two more Bradford compositions, “It’s Right Here For You” and the Made in Harlem hit “Harlem Blues,” retitled “Crazy Blues.” This time, black musicians would accompany the vocalist.

There are conflicting accounts of who played on the historic session of August 10, 1920—pianist Willie “The Lion” Smith said he, not Bradford, assembled the first iteration of the Jazz Hounds—but there can be no doubt that right from the opening notes of “Crazy Blues,” raucous high spirits are in evidence.

A 21st-century listener not steeped in the historical progression of syncopated music may have trouble discerning what made “Crazy Blues” a unique record in its time. Part of its innovation can be found in the composition’s musical structure. Bradford sandwiches 12-bar blues stanzas between a traditional 16-bar verse and 16-bar chorus.

The result integrates an African American musical sensibility into the prevailing popular song format. In this way, Bradford’s craftsmanship is similar to that of Handy, whose “St. Louis Blues” alternates a 12-bar chorus with a 16-bar release of tango-tinted ragtime. This is sometimes called a “vaudeville blues” or “popular blues” style, a Tin Pan Alley hybrid distinct from the later country blues song form in which the 12-bar pattern predominates. 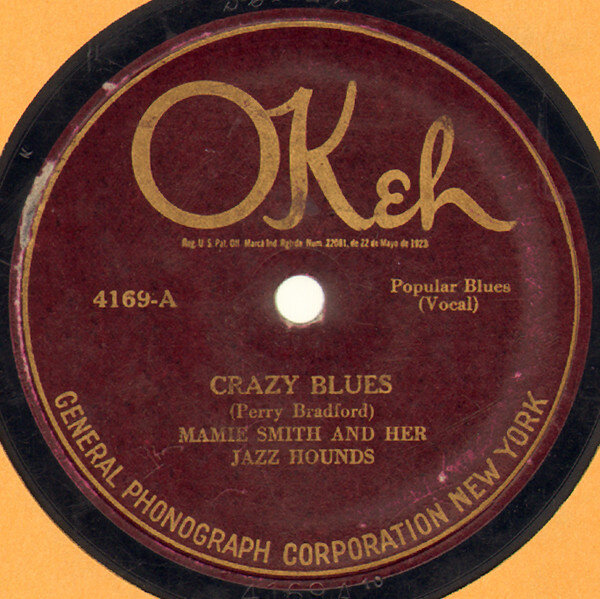 Lyrically, the song is an admirable exercise in slowly building intensity. The opening verse sets up a familiar tale of heartbreak and busted romance. The first blues snatch begins with the words “There’s a change in the ocean/ Change in the deep blue sea,” reminiscent of the 1921 hit song “There’ll Be Some Changes Made” by the black vaudevillians W. Benton Overstreet and Billy Higgins.

The singer contends, however, that “there ain’t no change in me,” only steadfast love. This sentiment is belied in the very next phrase, “Now I got the crazy blues,” opening a chorus in which the singer threatens homicide while telegraphing a prospective insanity plea. Two more blues stanzas follow as the singer threatens suicide, until this ribald tale reaches its smoldering finale:

I’m gonna do like a Chinaman, go and get some hop

I ain’t had nothin’ but bad news

Now I’ve got the crazy blues

The combined impact of racial and drug references with an explicit invocation of cop-killing, more than half a century before the ascent of rap, surely helps explain why Harlem went bananas for “Crazy Blues” in the aftermath of World War I and the race riots of 1919. Still I think it’s safe to say the female voice of Mamie Smith did more than any other factor to manufacture this breakthrough in commercial music.