The Beginning of the Manufactured Hit

In the music world, it is easy to overrate the popularity of songs and performers. This is not a new concept, and in terms of the history of recorded sound, it is one of the oldest tricks in the book. In the 1890s the recording business was just getting started, so a lot of how the business actually worked was still being sorted out by those who ran the record labs and even by the artists themselves. Since this decade is so early on in recorded sound, fully understanding the relationship between music publishers and recording labs is difficult, but what there is to study on this topic is quite telling, and seemingly modern in many ways. The idea of the manufactured hit is nothing new.

Beginning in the very early 1890s, the few recording stars there were knew it would be advantageous to promote publishers and composers by recording their songs. One of the earliest examples of this goes all the way back to 1889 when Edward Issler recorded Thomas Hindley’s “Patrol Comique.” This piece was composed in 1886 by the English born Hindley who worked occasionally with Issler’s musicians in the 1880s. With this in mind it would seem inevitable that this piece be a favorite with phonograph folks. The piece continued to be recorded again and again by countless artists all the way into the 1910s.

The title may have been somewhat popular in the 1880s around the time of its composition, but as coin phonographs spread like wildfire throughout the United States in the early ’90s, “Patrol Comique” became universally known for its signature combination of folk jigs and the newly emerging syncopated melodies soon to be called the cake-walk.

Hindley’s “Patrol Comique” is a perfect example of the manufactured hit, and could be considered the first of its kind, but that doesn’t mean that the idea wasn’t applied other times in the 1890s. By the middle 1890s, the combination of publisher and recording lab seemed to happen more and more.

When singer Dan W. Quinn was interviewed in the 1930s, he claimed that in 1895-96 he was handed a copy of May Irwin’s famous “Bully Song” before it was even published. Quinn recorded it on a Berliner disc at that time, making for the first recording of the soon to be popular song turned folk song. Later on that piece was recorded by dozens of others, including Len Spencer, and banjoist Ruby Brooks. Not all of Quinn’s claims are entirely correct, but the one regarding May Irwin’s hit does present a distinct look into the underhanded deals that were beginning in the 1890s between recording artists and publishers.

And now we get to Fred Hylands. Hylands was a minor accompanist in vaudeville who somehow made his way into the Columbia lab in early 1897. He started at the very bottom of the ranking ladder at Columbia when he started, being kicked around and mocked by his haughty and well paid recording stars. All of these bitter feelings began to bubble up into something revolutionary by the end of 1898. Before Hylands, no recording stars had attempted to publish their own music for the intention of recording artists, effectively combining recording labs with publishers. 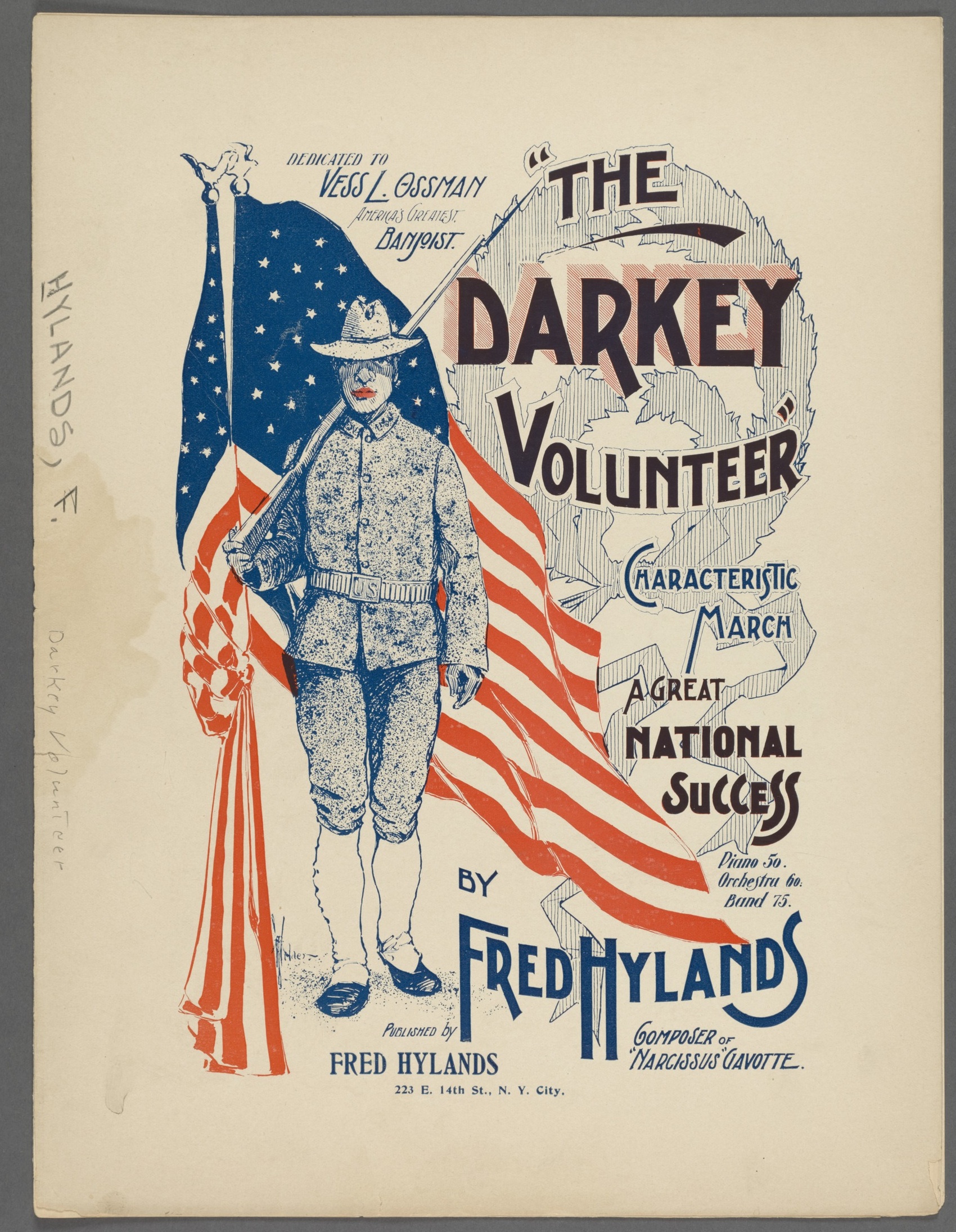 In 1898 Hylands started a short lived vanity publishing firm at his apartment on East 14th Street in New York. He published his own “The Darkey Volunteer” under this firm. This piece was a curious case of a manufactured hit, as he had been performing the piece for several months by the time he copyrighted it at the very end of 1898, and it was likely recorded before its copyright date.

He handed advance copies to all the recording staff at Columbia, ordering that it be recorded a certain number of times to present a case for popularity. This is a classic case of manufacturing a hit. Under Hylands’ whims, the piece was recorded by Vess Ossman (on three different labels!), George Schweinfest, the Columbia orchestra, and others. Hylands handed out copies exclusively to recording folks, and not just at Columbia, within the next year the piece made its way into the fledgling Zon-O-phone label.

It was also in 1899 that Hylands started his own publishing firm with Len Spencer and the rest of the Columbia recording staff. Hylands, Spencer, and Yeager was the firm, and it was the first successful attempt at combining music publishing with recording. Hylands took his moderate success with “The Darkey Volunteer” and applied it to every piece published by this firm. Hylands not only published songs written by recording stars, but also those of up and coming writers like Nathan Bivins (an African-American writer lost to history) and J. Fred Helf.

The idea of this firm and the initial success proved very promising, and it actually was for about a year. In the middle of 1900, Hylands had burnt through a lot of his profits, and was short of cash, so by October he closed the firm and sold all his stock. Hylands took in many young men to stay with him for short periods of time in 1900 while the firm was going downhill, and among these boys were likely Justin Ring and Fred Hager.

Hager was an expert at manufacturing hits, and it is likely that his witnessing of Hylands’ rise and fall educated him on this concept. In 1902 he wrote a few songs with Justin Ringleben, and a few of these songs were published by their own firm. One of these pieces was called “Mr. Voodoo,” with lyrics and poetry by none other than Cal Stewart!

Their first moderate success was their song “I’ve Got My Eyes on You,” which Ring was said to have actually written, but had to sell to allow for it to be made popular. Hager handed the piece to several of his exclusive musicians who recorded for several labels, so this allowed for an ease of motion to get the piece out there.

Hager at this time possessed a near monopoly of the musicians used in recording labs, controlling a majority of all the musicians making records for major labels. With this power, it was prime for him to write another manufactured hit. In 1903, he (along with good old Justy Ring, as Hager called him) wrote the mega hit “Laughing Water.” This piece was initially meant to be a manufactured hit, but it exploded on the music scene, spreading all over the country, as Hager’s simple melodic style proved agreeable to everyone. Even Freddie Keppard in New Orleans was said to have played it!

Hager didn’t stop there…After several thousand copies were sold, and counting, he decided he could throw another one out there, and this time use an inside joke to get the recording people laughing, but not necessarily the public. In 1904 he and Ring wrote “Handssome Harry,” which had the same history as “Laughing Water.” At first the piece was not major success, but through his exclusive ownership of recording lab musicians, he was able to get the piece recorded on several labels, those of which include: Zon-O-Phone, Leeds, and American (the blue records with the Native American on the label).

Within a few months, “Handsome Harry” was all over the place, and it wouldn’t be surprising if Hager had some hand in getting some of the publishers to distribute copies for extra cash and propaganda sales. Hager in that same year started a publishing firm with writer J. Fred Helf—remember him from the Hylands, Spencer, and Yeager fiasco? This firm was started for the reason Hylands started his, but it was far more successful, lasting from 1904 to 1910, and producing some of the most popular songs of the period, and getting hundreds of recordings out there under the ambition and power of Hager.

By the 1920s and ’30s record companies and publishers were seemingly the same business, but these two fields were very separate in the 19th century. A few ambitious and progressive thinking folks thought of the two things working together from the very beginning of recorded sound, they helped form the idea of recording artists being associated with a single song, a lot like Eddie Cantor being associated with “Makin’ Whoopee.” A little exaggeration goes a long way.