Full many a flower is born to blush unseen
And waste its sweetness on the desert air.
― Thomas Gray, An Elegy Written In A Country Churchyard 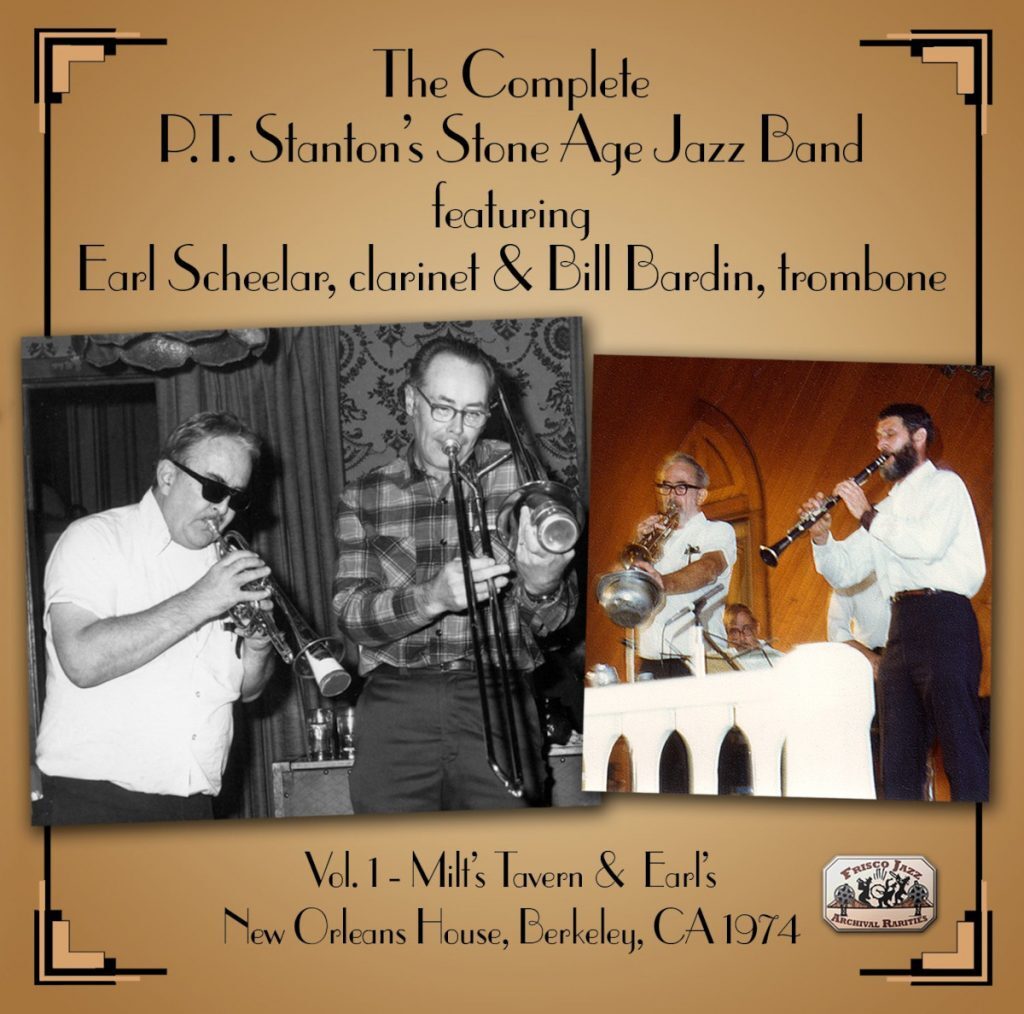 Gray’s line about the flower could be a metaphor—in part, at least—that applied to many traditional jazz bands from the days before the advent of festivals and of the internet. Many bands, such as the one that is the subject of this release, went largely unknown and unappreciated by almost all but the jazz fans in their locality. Today, however, thanks to the internet such anonymity no longer prevails—witness, for example, Tuba Skinny and the Shot Gun Jazz Band, to mention just two. Their recognition, extending beyond New Orleans, is worldwide.

Lacking such means of disseminating their music and their name, the Stanton band was largely known only to jazz fans of the San Francisco Bay Area, their home turf. Fortunately, one of the band members, Earl Scheelar, acquired several tapes of the band’s performances, which form the basis of this three-CD set. Despite the title, however, it is not the “Complete” recordings, as at least one other recorded performance was issued in 1991 on a Stomp Off LP S.O.S. 1228 and also on cassette (but never reissued on CD). Two of the tracks from that performance on the Stomp Off LP are repeated on vol. 3 of this CD set, “Put on Your Old Grey Bonnet” and “There’s Yes, Yes in Your Eyes.” The other eight are not.

The musicians are/were all well-known in the Bay Area, and I had the good fortune to play alongside the majority of them. Regrettably P.T. Stanton was not one of these. He was, as one can hear, a different kind of trumpet player/leader. He does not play loud, playing much of the time with a mute (or even his hand in or over the bell, apparently), and he solos infrequently. He seems more content leading the ensemble and playing behind the others as they solo.

On occasion he will even just drop out of the ensemble, as he does, for example, on “Bugle Boy March” (v. 3). He will punch out flurries of eighth notes from time to time, as in “1919 March” (v. 2), “Tiger Rag” (v. 2), or “You Always Hurt the One You Love” (v. 3), with rasps, growls, and clipped tones along the way. He is not much given to legato tones. Even when he fails to land precisely on the note he is aiming for, he makes it sound as if it is part of the expression. His presence is constant, as he guides the band inauspiciously, occasionally muttering direction to them sotto voce.

So it is that the band can come down so cleanly on the stops in “Beale Street Blues” (v. 2) or “Shake That Thing” (v. 2), or the complete stop at the end of “Get Out of Here” (v. 1; v. 3) before then launching into the one-time-through doleful strains of the chorus of “Friendless Blues” (v. 1; v. 3), the closing number for the Lu Watters Yerba Buena Jazz Band that was so dear to the hearts of the San Francisco Bay Area fans. 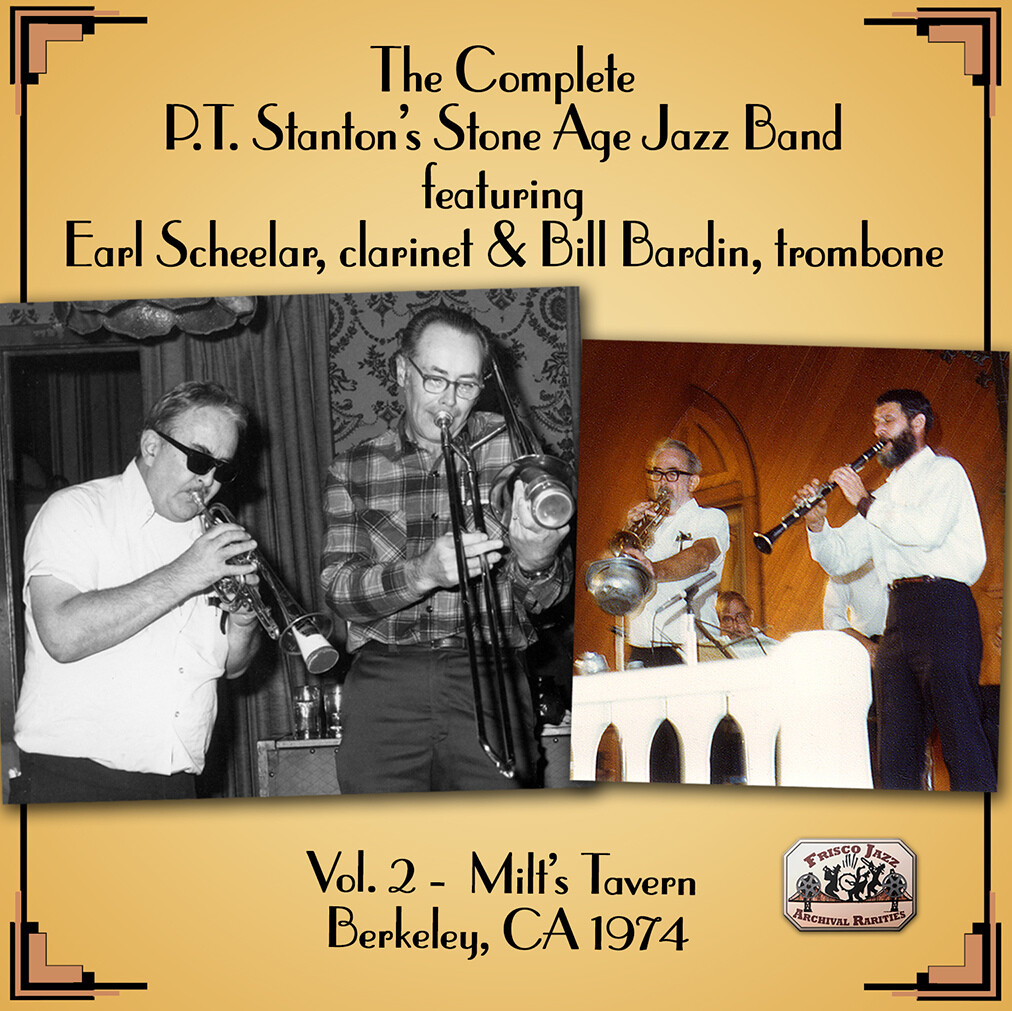 On clarinet Earl Scheelar shows his New Orleans chops. Frequently he will take the first solo following the introductory ensemble chorus(es), his second time through usually being backed by the rest of the front line. While he is adept in playing in the chalumeau register, as he does in the opening and closing of “Earl’s Blues” (v. 1), on the first strain of “Girl of My Dreams” (v. 1), or in his first solo and the coda on “Mood Indigo” (v. 2), for instance, and elsewhere, in most tunes he demonstrates his partiality for the upper, especially, and middle registers, and he illustrates his command of vibrato. He will often send cascades of notes as, for instance, on “Bugle Boy March” (v. 3), even when playing counterpoint.

When I formed a small traditional jazz group back in the late eighties/early nineties, I was fortunate enough during the several years it existed to have Bill Bardin on trombone. He was a kind soul, always willing to help in any way he could, sincere and serious about the music and with very definite opinions about what should be played and how. Most often he was right!

The counter melodies he plays in this set are so appropriate, as are his other contributions, such as the riffs he lays down behind the clarinet on “Old Spinning Wheel” (v. 1), the rubato introduction he extemporizes to “Just a Closer Walk” (v. 2), the harmony he plays in the second strain of “Weary Blues” (v. 1) or in the first strain of “Tiger Rag” (v. 2), or the unison he plays along with first the trumpet, then the clarinet in “Bugle Boy March” (v. 3), followed by harmony with the clarinet on its second chorus. It all added up to his being a fine trombonist.

The other musicians were all, to varying degrees, familiar to aficionados in the Bay Area. Pete Allen and Walt Yost were so solid on their respective basses that tempos were held to rigorously. Neither soloed, but they did take breaks and fills effectively as well as providing that all-important “floor.”

In similar fashion all of those called upon to provide chords on guitar or banjo—Peter Berg, Karl Walterskirchen, and Paul Boberg—so crucial in a “pianoless” band did so flawlessly and, again most importantly, maintained the set tempo so that there was no acceleration that so often is started by some who occupy these chairs. Drummers can also contribute to rushing, but this band opted to exclude drums as well as piano, so it was doubly important for these rhythm players to be resolute.

Neither piano nor drums are much missed since the band can be and is quite percussive, although the marches might have been enhanced a little—the washboard in “1919 March” (v. 1) notwithstanding—by some good drumming, particularly some bass drum syncopation and good pressed rolls on the snare. In the tracks she plays tenor sax on, Lisa Pollard adds to the fullness of the ensembles and her solos, which are a bit pedestrian, show she does not favor vibrato. 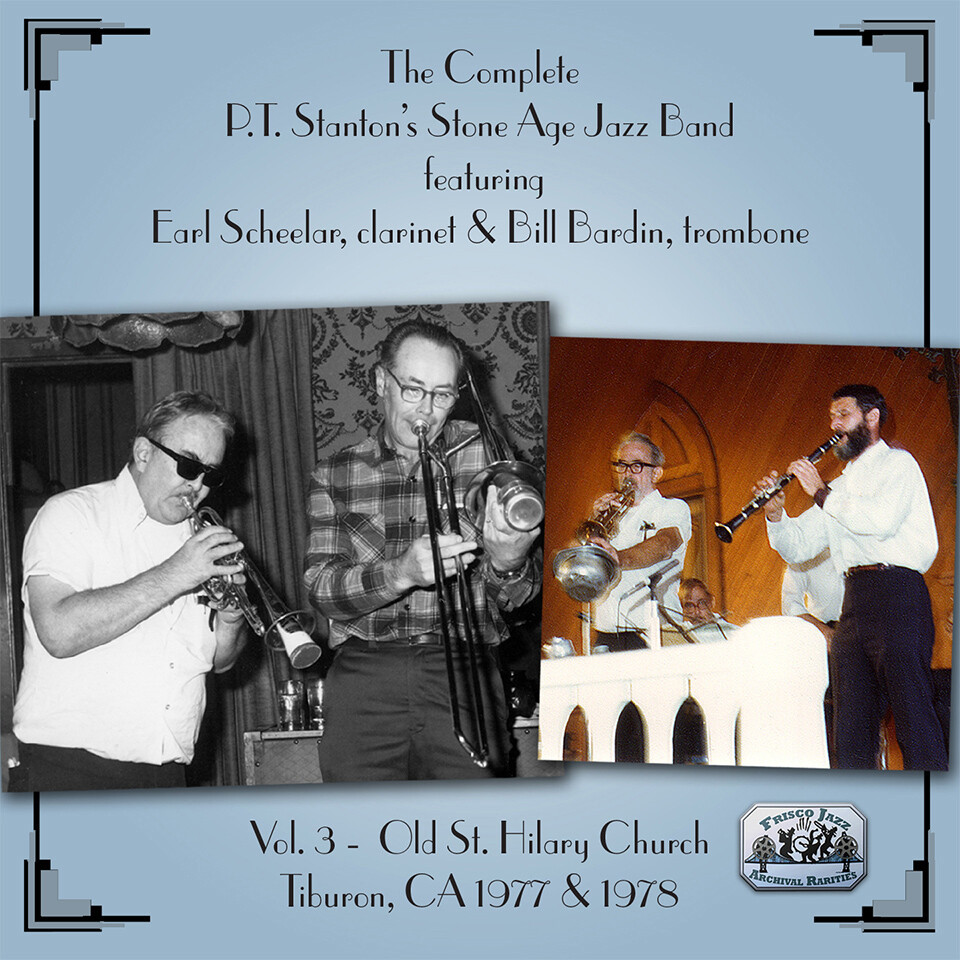 As to the repertoire, the band did not eschew the standards, as can be seen from their play lists here. Instead they gave these tunes their personal twist, making them sound quite fresh. The only “stranger” may be “Earl’s Blues” (v. 1), also called elsewhere “Stone Age Blues,” which opens with Scheelar playing in the chalumeau register, mournfully, and continues with its soft backing of the clarinet, even as it climbs in register, and with the muted tones of trumpet and trombone.

After the ensemble reaches a crescendo, with the clarinet leading in the high register, the piece reverts to the mood and feeling of the opening, again the clarinet, softly backed by the rest of the front line, descending into the chalumeau register through to the ritard of the coda. I found it all to be quite moving.

This is a good, representative set of CDs by this fine, if little-known, band. Those who have the Stomp Off LP (or cassette) will undoubtedly want to add these three CDs to their collection. Those to whom this New Orleans style band is as yet unknown will find the set to be an admirable introduction to it. Dave Radlauer, who re-mastered, produced, researched the set, and also wrote the liner notes, says, “It may be found on iTunes, Amazon, e-Bay or streaming service.”

Learn more about P.T. Stanton and hear rare audio of his band.

Bogalusa Strut; Beale Street Blues; Shake That Thing; Weary Blues; I’m Gonna Sit Right Down and Write Myself a Letter‡; I Ain’t Gonna Give Nobody None of My Jelly Roll‡; Mood Indigo°; 1919 March; Tiger Rag; Mecca Flat Blues; Just a Closer Walk; Tishomingo Blues When You Wore a Tulip; Panama

I’m Forever Blowing Bubbles; Beale Street Blues; Carry Me Back to Old Virginny; See See Rider; Sing On; You Always Hurt the One You Love; There’s Yes, Yes in Your Eyes; Do You Ever Think of Me; Get Out of Here (with Friendless Blues coda)