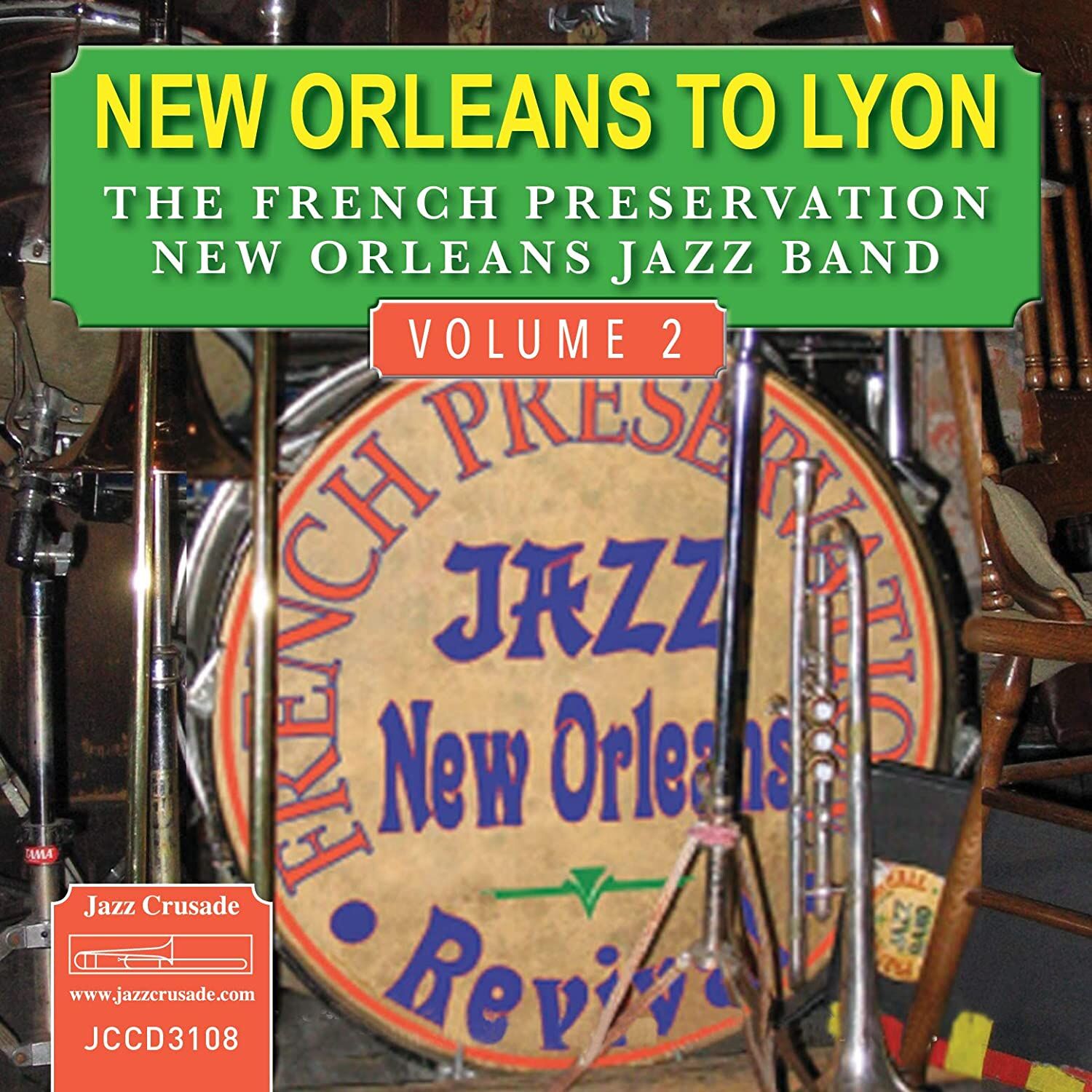 The French Preservation New Orleans Jazz Band, while not well known in the U.S.A. other than, perhaps, in New Orleans itself, enjoys wide recognition in Europe. Based in Lyon, France, it was formed by Jean-Pierre Alessi originally as a quartet with himself on reeds and lacking a piano, and later became a sextet or sometimes a septet. Regardless of size, the band, as its name suggests, is firmly in the revival mode.

A giant contributor to this New Orleans revival approach is the drummer, Herlin McFly (real name Vincent Hurel). He it is who provides that pulse, that driving palpitation that underlies what we hear and feel, whether the band be playing ensemble or providing backing for the one playing lead. And McFly has indeed heard well what the old New Orleans drummers were doing, as Marcel Joly says in his liner notes:

[McFly] stayed for two years in New Orleans where he played with all the local musicians. He loves all the New Orleans drummers . . . and has mastered the famous New Orleans street beat to a T.

There is nothing flashy about McFly’s playing, no dazzling us with an excess of technique—he is content just to provide the heartbeat of the New Orleans style, to propel the band ever forward.

His masterful bass drum syncopation contributes largely to this movement, accompanied by the careful pressed rolls and judicious use of cymbals, along with rimshots, for accent. He takes only three solo spots where the rest of the ensemble lays out—in “Tiger Rag,” “The Second Line,” and “The Darktown Strutters’ Ball”—with classic pressed rolls throughout, and he shows great taste where he trades fours with the string bass on “Should I” or in his four-bar tags on several tracks. His cohort Gerdil, on string bass, combines with McFly on drums to engineer that propulsive throb that underscores the best of New Orleans style bands. While he does not solo, he does engage in those interesting fours he trades with McFly on drums.

The rest of the band, of course, play their part, particularly the two guests. John Royen is well known among New Orleans revival jazz aficionados. Originally from Washington, D.C., he moved to New Orleans in 1976 and has called it home ever since. While he keeps alive the stride piano tradition, he is most adept at playing the keyboard in a band, as his many calls to do so attest and his playing here demonstrates. Not only does he provide the solid chords for the band to build on, he can also surprise one with deft touches, such as leaving a single note suspended, via the sustaining pedal, for a couple of measures à la Jelly Roll Morton in “Tiger Rag,” or going into double time unexpectedly on the breaks in “Sister Kate”

The other guest, clarinetist Kjeld Brandt, is from Denmark. He was an admirer of George Lewis and embraced much of Lewis’ technique without slavishly copying it, thus remaining his own person. He founded and led the New Orleans Delight band, with personnel from both Denmark and Sweden, which enjoyed much acclaim in Europe and the U.K. Tragically he suffered a massive stroke in 2012 which ended his playing days, but here we hear him in his prime. He is at ease in all registers and makes his presence known right from the start with a romping solo in “Blue Eyes Crying in the Rain” and great runs and counterpoint elsewhere.

Of the other members of the front line, Martien provides a commanding lead on trumpet, exploring all ranges skillfully—especially the upper register—growling where appropriate. Alessi is a master of tenor sax, an instrument not frequently to be found in traditional jazz bands, with just the right touch of vibrato and no honking. His technique is evident but not flaunted. The trombone playing of Espinoux is somewhat understated, but he provides thoughtful solos and, on at least one occasion (“The Second Line”) provides a fitting counter melody to the clarinet.

The remaining band member, banjoist Lemaire is content to lay down the chords for the most part, although on occasion he does come front and center, taking a solo as in “Melanie’s Boogie,” “Four Leaf Clover,” and “The Second Line” or even playing the introduction (solo) to “Should I?” on these occasions indulging in a little single-string work as well as strumming.

Almost all tracks on this CD have leisurely explorations of the tunes—only two are under 6 minutes, and these are 3:48 and 5:24, so the musicians have considerable space to work the songs over. As to the tune list, it caters to all tastes. While most are standards, many are given a refreshing new treatment, such as the extremely slow tempo of “Uptown Bumps” (aka “My Bucket’s Got a Hole in It”) or the languid tempo of “St. Louis Blues.” Other lesser known (perhaps unknown) tunes are included, such as “Melanie’s Boogie” (although I must confess that such boogie tunes, probably improvised, done by the whole band do not do much for me) and “Big Bad Bully,” which I have never come across before, and the seldom heard but wonderful “Blue Eyes Crying in the Rain.” This latter track is one of my two favorites on this disc, the other being “The Second Line”—for me they are worth the price of the CD by themselves.

The Jazz Crusade label was acquired by Upbeat Records, which is doing a magnificent job of keeping the catalog available. Jazz Crusade CDs are available from the Upbeat web site upbeatmailorder.co.uk.