The Museum of Making Music

Located just off of Interstate 5 in Carlsbad, California, 30 miles north of San Diego, the Museum of Making Music describes itself as the only museum worldwide that focuses on the ecosystem of music-making from 1890 to the present by presenting the storied history of music instruments and products—from invention to creation to market—and demonstrating how musical instruments impact popular culture and connect lives.

The Museum is housed in the headquarters of NAMM, the International Music Products Association that serves the $17-billion global music products industry. Opened in 2000, it is the brainchild of retired NAMM president/CEO Larry Linkin, who devoted his 40-year career to the promotion of music education and music-making advocacy.

Linkin saw the Museum as an opportunity to celebrate the history and impact of the music products industry and to connect visitors to live music and music-making opportunities. “By focusing on the story of what influences people to play music, we are exploring the connections between people, instruments and the music they make,” he recalled. The first president of the Museum was Henry Z. Steinway, great-grandson of Heinrich Engelhard Steinweig, who started building instruments in the kitchen of his home in Germany and founded the piano company, Steinway & Sons. 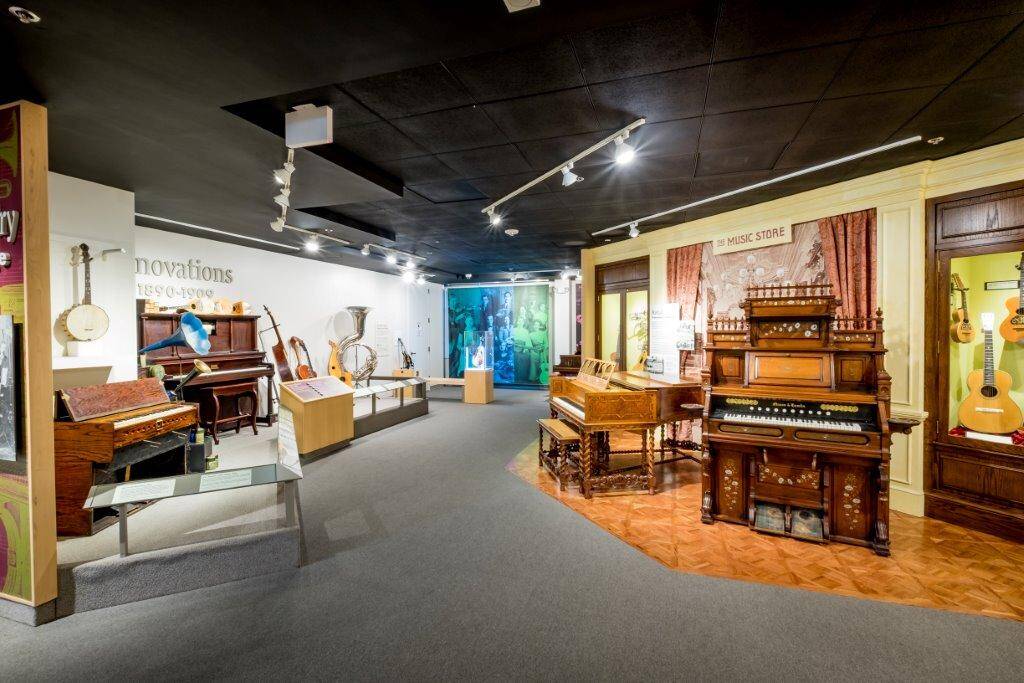 Visitors traverse a series of galleries to view an extensive collection of instruments dating from the late 1890s to the present time, hear familiar tunes in audio and video clips, see vintage music store settings, and have hands-on opportunities to pick up and play a variety of instruments. According to Museum executive director Carolyn Grant, “It’s the soundtrack of our lives and is part of a much larger story…the story of how an industry—the music products industry—supplies the world with the instruments, products and equipment that are needed to make music.”

Many of the exhibits have fascinating stories to tell. One display offers an exploration of the piano technician’s world of tuning, voicing, regulating and rebuilding pianos in the quest to ensure pure sound of the instrument’s expression. Guests can also explore the mechanics of piano keys through a hands-on display of the functions of a single key. 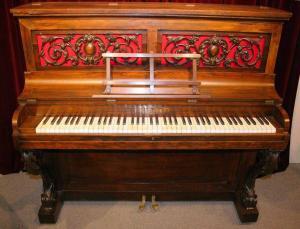 The 1859 Chickering piano that belonged to actress Laura Keene was the piano in use at Ford’s Theatre the night that President Abraham Lincoln was assassinated on April 14, 1865.

A special exhibit, “Floating Strings: The Remarkable Story of the Harp Guitar in America,” examines the appearance of harp guitars from the 1890s to the 1920s, and their renaissance which began in the 1970s and still continues to the present day.

A home phonograph from 1901, which played wax cylinders, was originally developed as a result of Thomas Edison’s work on two other inventions, the telegraph and the telephone. Edison was working on a machine that would transcribe telegraphic messages through indentations on paper tape, which when played back at high speed, made “a light musical, rhythmic sound, resembling human speech heard indistinctly.”

The phenomenon made Edison consider that if he could similarly record a telephone message as well. Edison used a telephone receiver equipped with a needle; the speaking vibrations made indentations in the paper. Edison later changed the paper to a metal cylinder with tin foil wrapped around it. When Edison first tested his experiment, he spoke the nursery rhyme,” Mary had a little lamb,” and to his amazement, the machine played his words back.

There is an accordion that was carried to the South Pole with Admiral Richard Byrd; and a Steinway “G.I. Piano,” a special compact piano that was shipped to far-off places during World War II so that troops in the field could enjoy music. A 1928 Rolmonica is a harmonica in a bakelite case that works on the same principle as the old player pianos. It has a paper scroll inside a case that is manually cranked as air is blown or sucked through the mouthpiece.

The voice of John Phillips Sousa, the March King, can be heard at one of the listening stations along with his band’s rendition of Stars & Stripes Forever. There is a section that honors Ikutaro Kakehashi, the late Japanese inventor, engineer and founder of the Roland Corp., who was behind the synthesizer and drum machines that revolutionized electronic music in the 1980s and ’90s. The Innovation Studio brings the visitor into the 21st Century as to how the world of music-making has dealt with technological advances, diversification of musical styles, digital information and a connected global community.

Some 45,000 visitors toured the Museum last year, including 8,976 students on field trips, plus attendees at 45 concerts held in an auditorium on the premises. Plans are on the drawing board for a renovation project which will reorganize the Museum’s central storyline in the permanent exhibition galleries from its current chronological approach to one that will explore the history of the musical products industry through the lens of instrument families (or product communities), along with the infusion of modern technology.