Anybody who wonders why a band breaks up has never been in a real band.

Allow me to give a great example. Before I moved to New Orleans to play with The Assunto Dukes, A Dixieland Tribute, I lived in Fort Myers, Florida, for 20 years. During the majority of this time I played with Pat O’Brien’s Palm City Jazz, generally a trio. I played tuba, Pat O’Brien played banjo, and Bob Schroeder played clarinet, and they were both singers as well. (One of the great things about my musical career in Florida, is that I was always the youngest guy in any band, and all the other musicians called me “Jimmy.” I also usually had first choice of The Dixieland Jazz groupies. Sadly, most of them were born during The Roosevelt Administration—and not Franklin).

Bob and Pat were both seasoned musicians who played jazz festivals across the country for over 40 years. Both were now retired, and living in Florida. At the time, they were in their 70s and 80s. For about a 10 year period, we worked regularly, usually having at least one steady gig a week…which may have made me the most gainfully employed tuba player in the state.

I’m going to attempt to remember this chronologically. Deep breath. During this 10-year period, Bob quit the band—but rejoined a few months later, Pat fired Bob, Pat fired Bob’s replacement, Bob begged to come back, so Pat let the second replacement go, but Bob couldn’t work with the trombone player we added to the band, so the trombone player got fired, the replacement trombone man quit after one week because he didn’t see eye to eye with Bob, and then Pat quit his own band. (I also quit once during this time period, but I’m quite sure I had an excellent reason).

Oh…and Bob and Pat were best friends. They lived right across the street from each other.

Those stories are very representative of the relationship musicians often have with each other. Musicians, especially jazz musicians, are by nature, creative people. If you put several talented painters in a room, do you expect they would all paint exactly the same bowl of fruit?

These dynamics often intensify when a new player is “filling in” on a gig. “He plays too loud, why didn’t he start with the verse on that song,” “Muskrat Ramble should be played in Ab, not Bb,” “that’s an instrumental, he shouldn’t sing it,” “pick up the goddamn tempo,” “you should never go back to the top on that song,” and “why is he playing so soft?”

And that’s just the first set.

The first Dixieland Jazz recording was made in 1917 by The Original Dixieland Jass (yes, JASS) Band. For over 100 years now, there have been countless recordings and transcriptions of all of the classic Dixieland Jazz standards, and they are often dissimilar.

Obviously, no two recordings will be alike, due to the importance of improvisation in jazz. However, as the sheet music for these songs have been published, borrowed, copied, transcribed, and even stolen over the years, there may be dozens of versions of a single song available on sheet music, in numerous bootleg “fake” books which have been published over these many years, and of course, the internet, which is known for its extreme accuracy in all matters of music, true celebrity lifestyle stories, and conspiracy theories about how “Pearl Harbor was an inside job.” 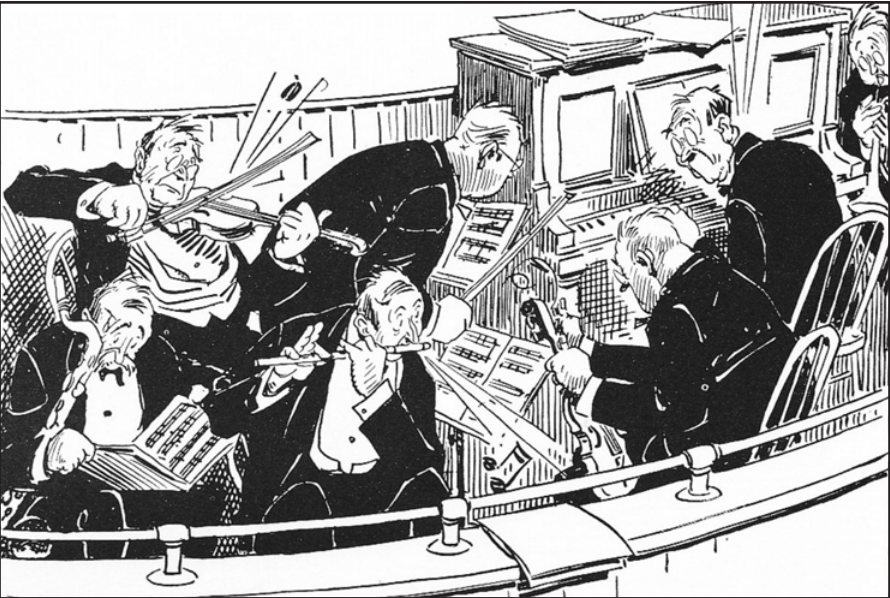 There are even “regional versions” of songs. Dixieland Jazz became popular in California in the 1950s, led by band leaders like Turk Murphy, Bob Scobey, and Clancy Hayes, who made recordings that sold well. However, the versions they recorded sometimes differ from bands that recorded in New Orleans, leading some musicians to remark, “he plays the West Coast version.” When I first moved to New Orleans, a musician remarked to me, “I think you are playing the Florida chord there.” Can you imagine an accountant saying “you must be using Philadelphia math?”

Which leads me to the pleasure of The Assunto Dukes, a Dixieland Tribute. When Deano Assunto decided it was time for a tribute band, he, I, and Ryan Burrage sat down, and for the first time in my life, three musicians were in complete agreement. (Deano does not play an instrument, but I consider him an honorary musician, as he knows this style of music better than anyone,…which I suppose would happen when your dad, uncle, and grandfather were Frank, Freddie, and Papa Jac Assunto).

From day one we all agreed we wanted to play music with the look, the sound, and the style of The Dukes of Dixieland.

Every musician joining us on the bandstand knew of, listened to, and respected The Dukes, who “played the music the right way.” That’s not a quote from me, that’s a quote from Pete Fountain, who wrote it in his autobiography, and played with The Assuntos when they were all teenagers.

Although it’s nearly impossible to get six band members on the same page, The Assunto Dukes have almost none of the drama outlined above. Whenever a musical disagreement will arise (and they are rare), we openly ask, “well, what did The Dukes do?”

As long as the answer isn’t “fire the tuba player,” I know it’s going to be another fine night with great fun, great music, and great feedback…oh, and maybe a great gin and tonic. You get quite thirsty playing a tuba. Plus, it gives me a chance to raise a glass in thanks to Frank, Freddie, and Papa Jac.

Jim Syoen is tubist for The Assunto Dukes. Visit them online at www.assuntodukestribute.com.