Many of us have not heard from Matthew de Lacey Davidson for some time. Though he is now retired from performing, his ragtime recordings are still around as CDs and YouTube videos. Matthew was born in Toronto, has lived in three different countries, studied in the United States, and now lives in Halifax, Nova Scotia.

This review by Max Morath regarding his first CD well describes Matthew’s music: “…[Davidson’s] stunning premier performances… mark… this pianist for landmark status and accolades – adjectives for which one reaches for the Thesaurus: prodigious, consummate, mighty. Well – sublime.”

Davidson is also a published author and poet. He has composed a range of classical and popular music in his career. Matthew kindly responded to a series of written interview questions excerpted here.

Larry Melton: What inspired the multi-cultural aspect of your compositions?

Matthew de Lacey Davidson: In New Zealand, my first composition teacher was Jack Body. He had just been commissioned to write a work for orchestra. In that work, “Melodies for Orchestra,” he stitched together three transcriptions of non-western music: a complex Greek violin tune, a Sumatran flute tune, and an Indian street band, (trumpets, clarinets, and drums). He then filled out the orchestral part underneath the melodies, much as Bach would have filled out the voices in a chorale harmonization. I thought it was ingenious and revolutionary, and thereafter I became interested in transcription of non-western melodies myself…One of my first piano rags, “Elegiac Rag,” uses a transcription of a Welsh hymn tune at the very end.

I noticed a bio comment that you are more interested in “the conscious development of appropriated material” than in producing a particular style of your own.

I have found having a style very limiting. All improvisation and composition (which is frozen improvisation) uses and re-uses a certain number of clichés. In an effort to avoid being “clichéic,” I have avoided being defined by a style. Eventually, all composers and writers start to repeat themselves.

What was your initial exposure to ragtime?

When I was twelve years old, my father bought a wind-up gramophone. The first record I remember him playing was “Swanee Smiles” by Hager and Ring, played by The Oriole Terrace Orchestra. I still have that same 78 rpm record, 45 years later! Although this is a “sort-of-rag” and not the type of thing that most ragtimers like, I was completely charmed by its otherworldliness, and immediately wanted to play music like that. My father was also an avid collector of LP records, and one I remember clearly was Heliotrope Bouquet, by William Bolcom. From that recording…I heard the “Graceful Ghost.” I thought the harmonies were beautiful, and it was one of the first pieces I learnt…my father also had a number of Max Morath’s albums, which I thought were fantastic.

What drew you to Frost and Aswander?

When I moved to the United States in 1990, I wrote to a lot of people, two of whom were Alex Hassan and Robbie Rhodes. Robbie sent me some of his piano roll arrangements of Robin Frost’s rags recorded on cassette tapes. I was bowled over by the originality and technical virtuosity of Frost’s rags. I wrote to Robin Frost (Final Chorus, TST, June 2020) who then sent me the sheet music. A mutual friend introduced me to Donald Ashwander, to whom I then wrote in Brooklyn. I quickly struck up one of the most rewarding friendships of my life with him even though we never physically met…He sent me his LPs, and I thought his music was very unique and “edgy” the way it rarely conventionally cadenced. My friendship with him only lasted three years until his untimely death at the age of 65, but he was always very supportive and kind to me. When he died, I realized that the last album he had attempted to create, On the Highwire, had never been edited nor released. So, I used my own money to try and re-record and partially recreate his album myself.

How has traditional classical music influenced your ragtime compositions and/or performance?

My piano playing is unique in that I started off being a “ragtime pianist,” trained intensely in the “academy” as an advanced concert pianist, eventually returning to ragtime, then moving away from ragtime again. When I initially returned to ragtime in 1990, I decided to specialize in contemporary ragtime and 20th century and contemporary experimental music as a performer….my first rag, “Mystery Rag,” was a combination of Mahler’s harmonies with piano ragtime, and my third rag, “Transylvanian Tickler,” was an adaptation of Bela Bartók’s quintal and quartal harmony with the styles of “Fats” Waller and James P. Johnson. My rag, “400 Roncesvalles Avenue,” quotes Anton Bruckner, which imitates rags like “Russian Rag.”

What other influences have informed your music? 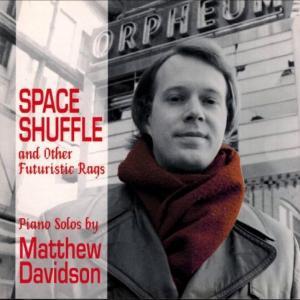 When I recorded “Space Shuffle,” I did over 200 takes. It was partially my lack of experience in recording, but also, I was partly trying to emulate what Orson Welles did in his best films, which was to create “special effects.” With “Space Shuffle,” I often spliced together fragments of takes in a way to create a type of “digital” performance of the pieces. I believe the end results couldn’t possibly be played by a human being the way it’s heard on the CD. From the “The Graceful Ghost” album, going forward, I did as few takes as possible to create more realistic performances.

What contemporary ragtime composers do you admire?

My favorite “contemporary” ragtime composers would be Max Morath, Donald Ashwander, Williams Bolcom, and Albright. But there are pieces that I also greatly admire by Jack Rummel, Galen Wilkes, Gary Smart, Terry Waldo, and, in particular, Hal Isbitz, whom I think has been terribly under-recorded and underestimated.

How would you sum up your current musical activity?

I am no longer involved in the musical world. I no longer write music but have made some arrangements for my own amusement. I play a small number of classical pieces, but I have arthritis and am no longer able to perform at a professional level.

Thank you so much for taking so much time with these questions.

The following is a brief ragtime discography of Matthew de Lacey Davidson:

On The Highwire: Piano Rags, Waltzes and Tangos by Donald Ashwander (2000)