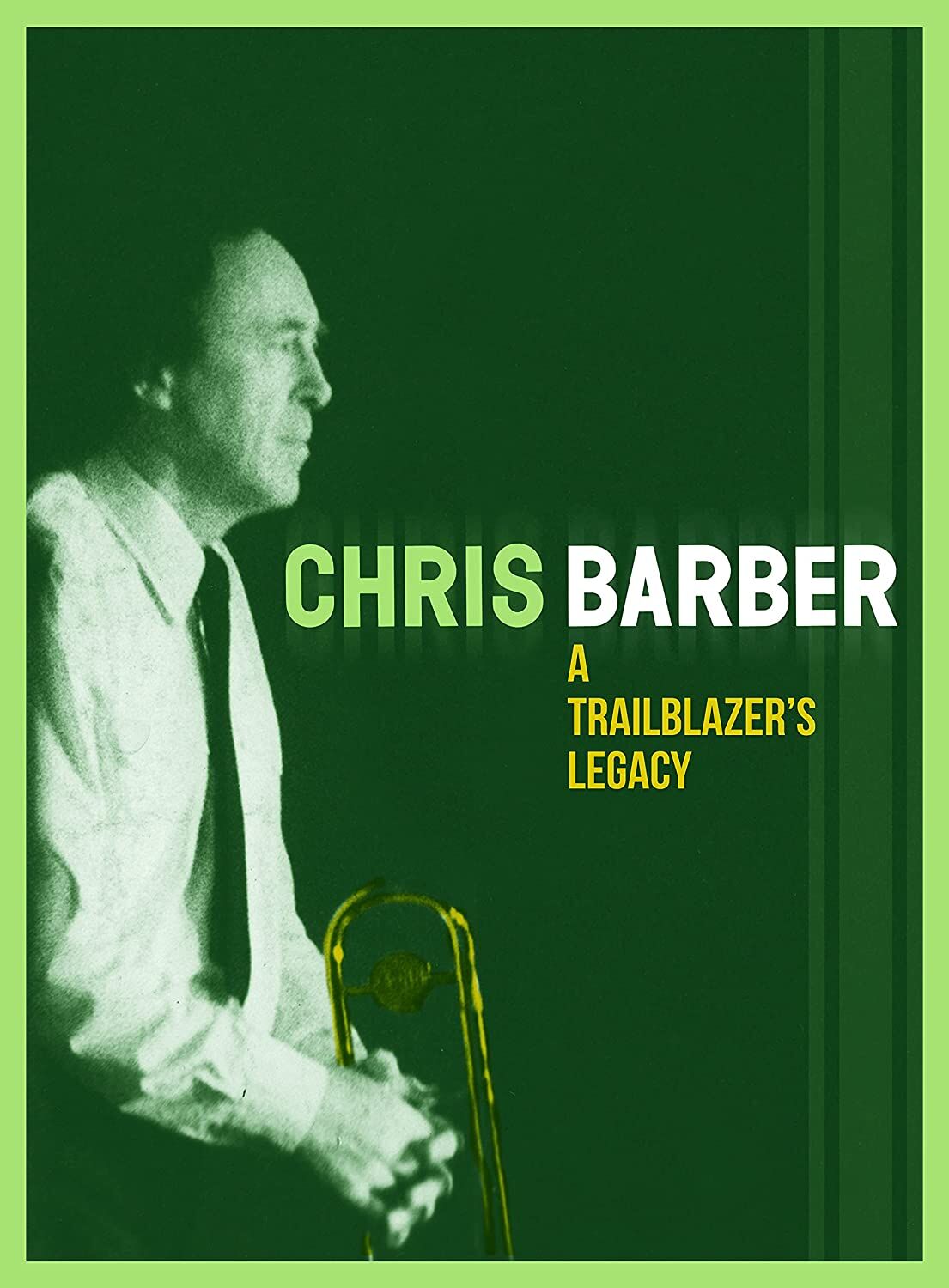 The late English trombonist and bandleader Chris Barber was known but not a star performer in the US. On the other hand, he and his band were incredibly popular throughout Europe for several decades. Barber died March 2, 2021, at age 91, yet his name was and still is a household word overseas. This 88 selection four-disc CD set begins with his first released recording in 1950 (“Stomp Off, Let’s Go”) and concludes in 2018 with his last recording appearance (“Savoy Blues”). The music presented in between barely scratches the surface of his prodigious recorded output over the years, but to the benefit of Syncopated Times readers, most of it is first-class traditional jazz performed in his unique, identifiable style.

Although Barber’s career spanned nearly seventy years, three discs here concentrate on the first twenty years or so when his group was basically a six-piece jazz band with three horns, and a rhythm section: bass, banjo, and drums. This group featured stellar musicianship replete with ensemble sense, particularly from trumpeter Pat Halcox, clarinetist Monty Sunshine (later Ian Wheeler), and Barber himself. It’s this writer’s educated opinion that all trombonists seeking to play traditional jazz should listen to Chris Barber’s mastery of melodic counterpoint within improvised ensembles. It was never just a “jam band.” The repertoire was diverse and interesting: Bunk Johnson thru Duke Ellington. Although this should have been enough to create a large following, there was one more thing that really put the band over the top.

In 1955 Barber added to the band a female singer from Ireland named Ottillie Patterson. She was not just a “chick singer” but a petite woman who could really sing the blues with authority. Her performance heard here of “St. Louis Blues” in concert was a smash. For many years thereafter she was an integral part of the Barber band’s concert performances She’s featured on several tracks, her most expressive being “Careless Love.” Unfortunately her voice deteriorated over the years due to illness and she was forced to retire in the 1970s. She died June 20, 2011, at age 79. While on top she and Barber were renowned celebrities.

By this time, the Chris Barber Jazz Band was well established as a popular entity. This was partially due to inclusion of well known American performers such as Sister Rosetta Tharpe, Louis Jordan, and Sonny Terry and Brownie McGee as well as jazzmen Edmond Hall and Albert Nicholas (all heard here). Barber expanded the band’s repertoire to include blues and gospel selections as well as featuring compositions originating outside the traditional idiom such as “Golden Striker” by the Modern Jazz Quartet’s John Lewis.

Barber added an electric blues guitar player as a permanent part of the band, eventually changing the title to The Chris Barber Jazz and Blues Band. One might have wished that more of the blues guitar on traditional jazz tunes had been included here (aside from “All The Girls Go Crazy”) to demonstrate a strong part of Barber’s creative approach to traditional jazz. It actually works. He also added a second reed player to fill things out. Piano to him was “clutter,” he was quoted as saying.

Most of the fourth disc here is devoted to performances of Chris Barber’s other interests, which include Balkan music (“Csikos,” strange time signatures, jerky melody, hard for this writer to take), but also good extended blues, swing, and gospel. Not so good is a rock version of “Didn’t He Ramble” featuring a vocal by Van Morrison added 26 years after the recorded accompaniment (with Dr. John on piano) and a repetitive soul vocal by Eddie Bo called “Wake Up” that inspires bored sleep.

This set is a good representative sample of Chris Barber’s work, however it does have a few flaws. The version of “Ice Cream” that is presented in the accompanying book as the long concert version is in fact a short studio version.

“When The Saints” is truncated by half with a clumsy splice. Both could have fit on the disc, although they could have easily been done without or replaced with more interesting tunes. The “Big Chris Barber Band,” which took up over ten years of Barber’s career, is afforded but one selection, Duke Ellington’s “Merry-Go-Round.”

This set comes with an 88-page book by bassist Alyn Shipton, which describes the tunes and features plenty of photos but is short on hard biographical detail. There are brief addenda by bandsman John Crocker (excellent reed player) about his many years and tours (300 international concerts a year) with the aggregation and a description of Barber’s race car hobby by David Brodie.

Not long after submitting the initial review of this nearly 70 year career compendium of English trombonist and bandleader Chris Barber, I realized that, due to space concerns, I had left too much important information out of my commentary. Here’s an attempt to fill in the blanks.

Chris Barber led an amateur band that made its first recording (unreleased) in 1949, although subsequent recordings did come out on a small label. By 1953 Barber decided that he wanted to become a professional, broke up his first band, and formed a New Orleans-style jazz band with Pat Halcox, trumpet; Monty Sunshine, clarinet; Lonnie Donegan, banjo; Ron Bowden, drums; and Jim Bray, bass. After Halcox decided that he wasn’t ready to turn professional, he was replaced by the then well-known trumpeter Ken Colyer under whose name the band performed and recorded. After Colyer and Barber clashed over Barber’s desire to enlarge the group’s style and repertoire beyond New Orleans idioms, Colyer left and was replaced by the now confident Pat Halcox, who would remain in Chris Barber’s band despite some radical stylistic changes for nearly 54 years.

Although always cognizant of dynamics (degrees of loudness and softness) at the outset the Chris Barber Jazz Band featured an improvised ensemble approach. Later on there was a greater dependence on arrangements that nearly always enhanced the performances. Solos were always prominent, however. Personnel changed over the years. Lonnie Donegan went on to become a successful folk singer while Ron Bowden became the longtime drummer with Kenny Ball’s (Midnight In Moscow) Jazzmen.

It should be pointed out that even from these early days Barber’s trombone style was basically set: declarative, almost shouting—simple yet not simplistic phrases, full toned yet not pretty as, say, Jack Teagarden. Regular people who were not musicians could understand and be moved by what he played. Both he and Halcox would add range, nuance and some technique later on but approaches were unchanged. Only when John Crocker joined on reeds in the 1970s did any bebop elements creep in, but he was adept enough to avoid that most of the time while usually driving with fervid heat. The biggest change to Barber’s band came in the late 1960s with the permanent addition of an electric blues guitar, first by John Slaughter, then Roger Hill, then Slaughter again until the end, plus the further addition in the mid-’70s of a second reed player.

From the mid-’50s to the late ’60s, bassist Dick Smith and banjoist Eddie Smith provided a rock solid, yet acoustic rhythm while drummer Graham Burbidge often surprised with unexpected percussive interjections. Dick Smith left to open an inn, as this scribe was informed by his brother, and was replaced by electric bassist Jackie Flavelle. This was the first major change to the band’s sound.

While there were long periods, especially in the early 1970’s, that traditional jazz was almost eliminated from the band’s repertoire with an emphasis on blues, fusion jazz, and yes, rock, it was never forgotten and slowly it returned. The banjo, which had disappeared from the ensemble for awhile, came back along with a lot more traditional jazz tunes, but with a different, personalized approach. Any Chris Barber group never sounded like a generic “dixieland” band. Perhaps Barber’s longtime fans had spoken, though, about what they wanted to hear. His band had always been enormously popular throughout Europe and would remain so. In addition, then, to the Balkan tunes and extended jams on Duke Ellington related material and blues (really good here, incidentally) one could hear a hot “All The Girls Go Crazy About the Way I Walk [sic]” from the Kid Ory Creole Jazz Band book amongst other classics.

Nearing age 70 in 2000, Chris Barber heard an album by trombonist Bob Hunt’s Orchestra of Duke Ellington compositions over the years that so impressed him that he hired Hunt and four of his key players to add to his own group and ultimately form the Big Chris Barber Band. This group would be Chris Barber’s concert unit until he could no longer perform due to encroaching Alzheimer’s disease, which ultimately killed him at 91 on March 2, 2021. Once again, only one tune by this band is included here.

It can’t be emphasized enough about his popularity, including traditional jazz but other idioms as well, throughout Europe. Notably, of the two pages of tributes to him at the beginning of this book and nearly five hour CD collection, all are written by English Pop and Blues figures, none by anyone related to traditional jazz.

There may be readers of this article who have never heard of Chris Barber. Although he and his band did appear in the United States a few times in 1959 and the early 1960s and appeared on a few LPs, he was never a big star here. Of course, with the exception of some swing-era bandleaders, no jazz musician has ever become popular in the US with the general populace—unless he could sing, like Louis Armstrong. The traditional jazz that makes up the majority of the music heard on this collection is worthwhile, but Chris Barber’s lack of fame here for his overall career output is regrettable.