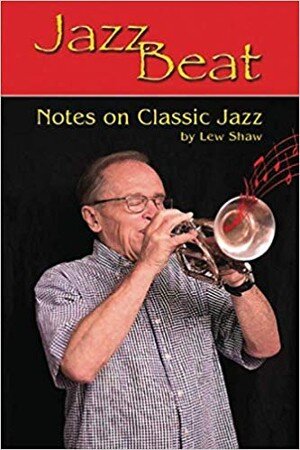 When Andy Senior mentioned in an email that Lew Shaw was publishing a second Jazz Beat volume of personality essays, I decided it was time to quit putting off reading the first one. While I haven’t spent much time pursuing Classic Jazz over the years, Lew’s writing and TST in general have brought me to a great appreciation of the music and its heritage.

Now, to be upfront, this is far from a review or critique, but rather a reflection on how the 47 profiles have resonated with me. Like Lew, I do not sing nor am I a musician, so we begin from a similar perspective. We both do have an extensive background in music appreciation, and we have acquired a group of extremely talented friends and acquaintances, though Lew has had a few years head start on me. Unlike collecting sheet music, since we generally have interests in different styles, I haven’t found the selection of personalities picked over by the fellow who got there first.

As I was reading the profiles and as I have been reading Lew’s articles in the paper, I also realize I am so impressed by his writing because he reminds me of another hero of mine. Back in my Sedalia days in the nineteen sixties and seventies the local Sedalia Democrat newspaper had a young feature writer who could make the most mundane subject seem fascinating and who could write back stories that intrigued, entertained, and inspired readers.

I once wrote in a dedication that Ron Jennings wrote about us like we were the most important people in the world…because to him, we were. I think that describes Lew’s writing as well. It is no surprise that both men are award winning journalists. In 2017 Lew was named a Jazz Hero by the Jazz Journalists Association and Ron was inducted into the Missouri Journalism Hall of Fame just before his untimely death.

I digress as is my tendency and yet I did say this is to be about how the book impacted me. In fact, I compare reading Lew’s book to being a guest at a high-end venue cocktail party for great Jazz personalities. I stroll among the conversations and pause occasionally to listen, only, in this case, I stopped to read about them. As I began, the subjects of each essay became more dimensional and I learned about the great talents of our time. Rather than read straight through, I decided to go first to names I recognized and then finish reading them all.

Thus, I stopped on the fourth entry and got better acquainted with Clint Baker. I already knew of his amazingly talented daughter Ramona (who now writes and illustrates well researched articles on the wax cylinder era of recording and the studio pianists of that time for TST.) Lew introduces Clint as an autodidact musician, a revealing description of Clint’s amazing talent. He is not only self-taught, I find, but quite versatile, in that he plays eight different instruments well. He’s a band leader of note and his wife Alisa Clancy is also a musician. Clint has been involved in many levels of music education. He defines versatility in and commitment to his craft.

I stopped at the next essay on Janet Carroll, recognizing her from performances at the Starlight Theater in Kansas City my wife and I attended often. After gaining fame in Chicago and Kansas City she moved to Los Angeles and sang with The Beverly Hills Unlisted Jazz Band led by trombonist Conrad Janis before becoming an actress of considerable note. Lew concentrates on her career as a performing singer.

The eighth profile drew me in quickly. Written just before Danny Coots donated a kidney to ragtime aficionado Danny Matson, the piece nevertheless illustrates the drummer’s great humanity, and passion for his music. Lew describes Danny’s best personal trait, likeability and indeed I have found him to be just that. Danny is a popular accompanist, seen at many ragtime events.

Vince Giordano’s profile was another initial read because of frequent mentions in TST and because his Nighthawks Orchestra played the Scott Joplin concert at St. Michael’s Cemetery last year. I enjoyed reading about Vince’s exuberance and versatility and the incredible repertoire of charts he brings to a gig. Vince is a preservationist who doesn’t just save music, he brings it back to life.

Carl Sonny Leyland’s profile reminded me just how talented this musician has become. Boogie is his thing and he plays it with both technical dexterity and soulful intensity. Most importantly, Sonny “connects” with his audiences.

I finished up my selective tour with Stephanie Trick. Her talented stride piano style is attracting much attention here and internationally. She is as personable as she is talented.

After picking familiar names I went back and enjoyed the other profiles including four well known Jazz groups. Richard Simon became a renowned Bass player after his youth spent in Kansas City and he is classically educated. I’m quite intrigued to learn of the great musicians who were still in Kansas City, Missouri, while I was growing up there.

I’ll leave the other profiles for new readers to discover but must end with one of Lew’s final essays in his list of four “Jazz Contributors”. I was delightfully surprised to find cartoonist Bil Keane in this list and Lew explained why Bil’s cartoons and comic strips are scattered throughout the book thanks to Jeff Keene’s generous release for Lew’s book.

Keane’s library of “Family Circus” books are a staple at my son’s house where they are to be found everywhere; some still intact but most reduced to individual pages. They have been read so often that my youngest grandson Trent can recite the captions on pages before and after any page selected at random. Bil appreciated good jazz and not only collected old records but frequently traveled to Jazz festivals. Lew and Bill became good friends at these events

The “Family Circus” cartoons were based on Bil’s own family and provide as fine an image of an American family life as can be captured. Many contain references to Jazz like the ones Lew selected to add interest to the profiles scattered throughout the book.

Back when ABC TV Sports covered the Olympics, they featured “Up Close and Personal” stories about some of the major participants. Lew Shaw was a sports journalist for several years and his essays remind me of those great programs. I’ll be nursing my Margarita and waiting eagerly for Lew’s next book of Jazz profiles to amble through.