The Nat King Cole story is a tale of two major talents, both owned by the same person. Equally skilled as a jazz pianist and a middle-of-the-road pop crooner, Cole would still be remembered with affection today if he only had one of those musical identities.

Nathaniel Adams Coles (he changed his last name to Cole early in his career) was born March 17, 1919 (although his birthdate has sometimes been given as 1917) in Montgomery, Alabama. He was one of four brothers who became musicians: bassist Eddie Coles (who was nine years older) and pianists Ike Cole and Freddy Cole, all of whom also sang. Raised in Chicago, Nat started on the organ when he was four and had his first piano lessons when he was 12. He considered his musical hero and main influence to be Earl Hines although, by the late 1930s, one could also hear bits of Teddy Wilson and Art Tatum in his playing.

Cole dropped out of school when he was 15 to work as a pianist, leading the Royal Dukes in 1934. When Eddie Coles returned to Chicago after touring with Noble Sissle, they formed a sextet, Eddie Coles’ Swingsters, recording four titles for the Decca label in 1936. The following year they toured with a revival of the musical Shuffle Along. That year he married a member of the cast, Nadine Robinson, and settled in Los Angeles after the show ended. Cole led a short-lived big band and then formed a trio to play in clubs that also included guitarist Oscar Moore and bassist Wesley Prince. At first they called themselves the King Cole Swingsters before settling on the King Cole Trio. 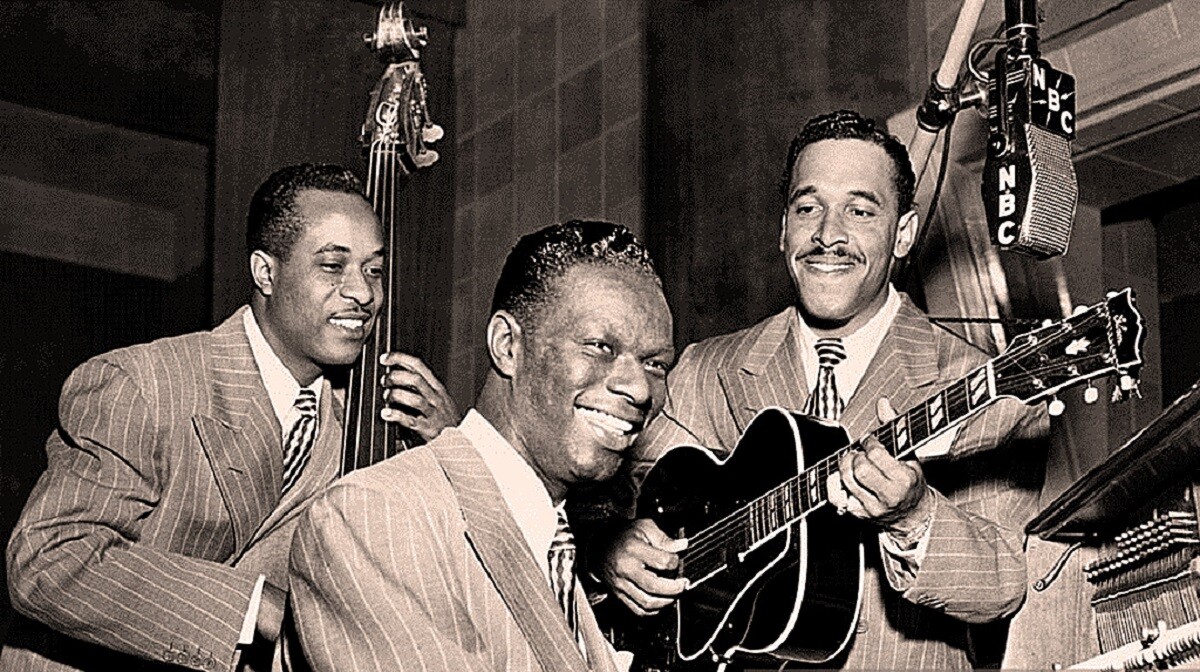 All of the music that exists from Nat King Cole’s first period (1936-43) except for two sessions as a sideman with Lionel Hampton in 1940, has recently been released on the superb seven-CD (or ten-LP) Resonance box set Hittin’ The Band: The Early Years. The release starts off with the Eddie Coles date and then includes no less than 71 selections that were recorded by the trio for radio transcription services that predate the trio’s first official recordings in 1940.

These noncommercial renditions were made strictly for radio airplay and were not available for purchase. The music alternates hot swing instrumentals and ballads with vocalizing by the trio in worked out scat-filled unison passages on heated versions of standards and novelties. On some numbers the trio accompanies other singers (Bonnie Lake, Juanelda Carter, Maxine Johnson, Anita Boyer, Pauline and her Perils, and the Dreamers) but up to that time Cole was not singing solos and the group’s ballads tended to be instrumentals. The legendary tale about how Nat King Cole first sang, being requested by an annoying drunk in a club, is a good story but obviously not true as evidenced by these performances.

The trio’s first official recordings were four titles made for the Ammor label on April 18, 1940 and these ironically have Lee Young added on drums; perhaps the label thought they were playing it safe. Of greater significance were a dozen titles made for Decca on December 6, 1940 and March 14 and July 16, 1941 for they include Nat King Cole having his first hit with a solo vocal on “Sweet Lorraine,” and doing a fine job on “This Will Make You Laugh” in addition to participating on some more group vocals and instrumentals. 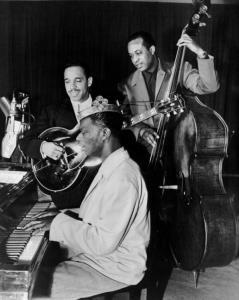 By that time, the King Cole Trio, which had become quite popular in Los Angeles, was beginning to gain a national reputation, helped out by its radio broadcasts. Cole, who can finally be heard singing a ballad (“Nothing Ever Happens”) on a radio transcription from July 22, 1940, was starting to be noticed, both as an increasingly influential pianist and a likable singer. But it was the interplay of his piano with Oscar Moore’s guitar that really made the group catch on at that point. Moore, who (inspired by Charlie Christian) had switched from acoustic to electric guitar, was at the top of his field, playing consistently swinging and inventive solos that, while often brief, added a great deal to the trio’s sound. Wesley Prince did a fine job in a supportive role with the trio and, after he was drafted in 1942, his place was taken by the equally skilled Johnny Miller.

One of the turning points of Cole’s career occurred when he signed with the Capitol label in the fall of 1943, an association that would continue throughout the remainder of his life. The best way to acquire Nat King Cole’s jazz recordings of 1943-61 is unfortunately a difficult and expensive task. The 18-CD box Mosaic box set The Complete Capitol Recordings Of The Nat King Cole Trio is perfectly done, including not only Cole’s studio sides but the many radio transcriptions that his group continued to make during the remainder of the 1940s along with later sessions from the 1950s that utilize the trio sound. But unfortunately, this huge set was a limited-edition release and is long out-of-print. Unless one can snag a copy on eBay, fans have to be content with much smaller repackagings of some of the music

Cole’s first Capitol session included a hit in “Straighten Up And Fly Right” and it was soon followed by a remake of “Sweet Lorraine,” “It’s Only A Paper Moon,” and “Embraceable You.” Cole took a brief period off from the trio to participate in the first Norman Granz Jazz At The Philharmonic concert (having a humorous tradeoff with guitarist Les Paul on “Blues”) and occasionally appeared on all-star combo dates, but otherwise he continued as before except on a higher level. Between the recording sessions, radio transcriptions, radio shows, and club dates, the King Cole Trio kept very busy and evolved.

The group vocals largely ended after the mid-1940s with Cole now taking solo vocals on both swingers and ballads. While half of their sessions were instrumentals, the most popular records featured Cole’s friendly and warm singing including such hits as “Nature Boy,” “Route 66,” Mel Torme’s “The Christmas Song,” and Billy Strayhorn’s “Lush Life.” Each of those songs became standards thanks to Cole’s singing.

In 1947 guitarist Oscar Moore left the trio which was no longer a democracy but a unit dominated by its leader. His successor Irving Ashby played in a similar style as Moore. The following year, Joe Comfort took over for Johnny Miller on bass. But the biggest departure for the group was the addition of Jack Costanzo on bongos later in 1947, with the billing now being Nat King Cole and his Trio. The quartet was now occasionally hinting at bebop and, with Costanzo a regular member, they were open to utilizing Cuban rhythms.

In 1948 Cole divorced his first wife and married Marie Ellington (who had sung with the unrelated Duke Ellington). They would have five children (two of whom were adopted) including the future r&b singer Natalie Cole. 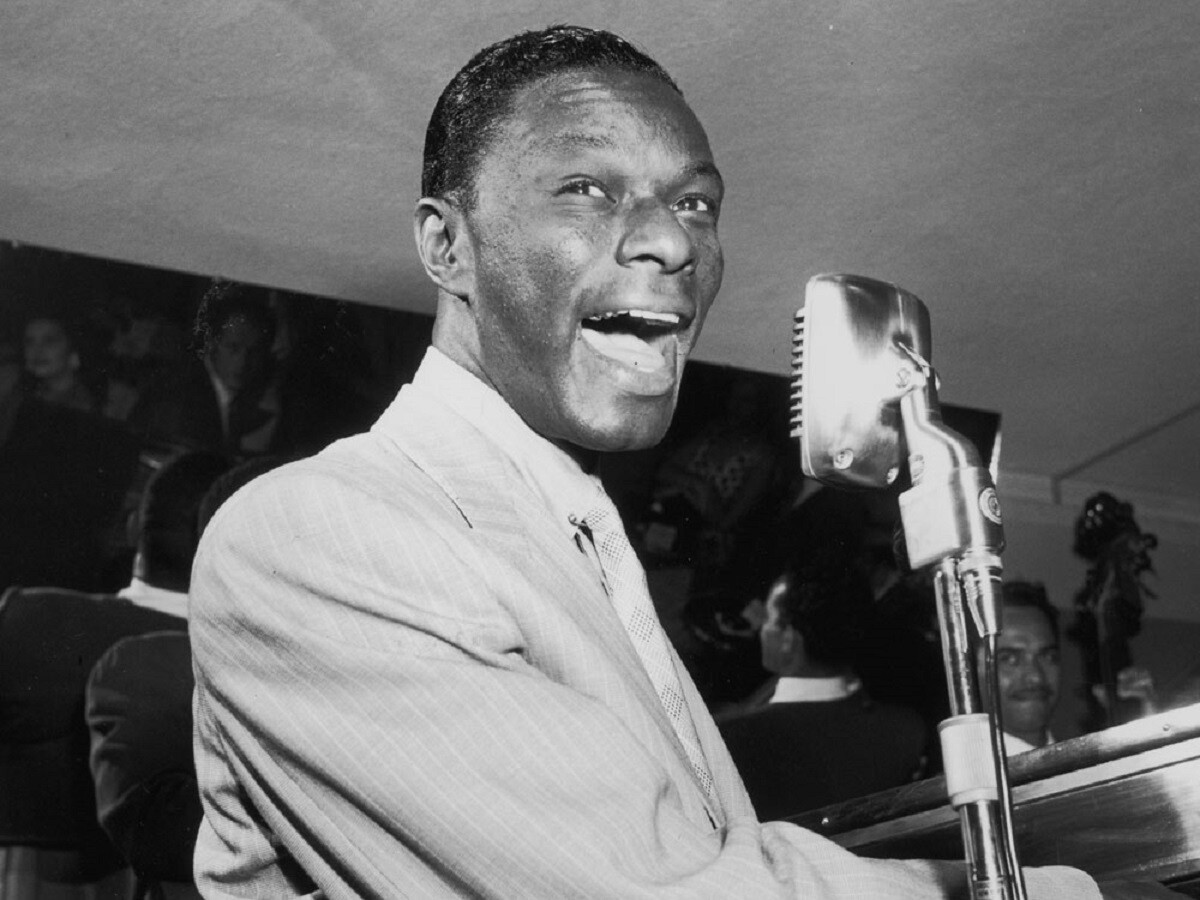 Everything changed in March 1950 when Nat King Cole recorded “Mona Lisa.” His recording became a Number One hit and suddenly Cole was a pop star. While he continued to tour with his trio for another year, after that it no longer had its own identity, becoming part of a larger orchestra that accompanied Cole’s singing. While he usually played a song or two on piano during his shows, within a few years many of his newer fans did not know that Nat King Cole was a great pianist. It is a pity that there were not two separate Nat King Coles (with the pianist continuing his career). In the show biz world of the 1950s (and to an extent today), it was considered safer to be a specialist rather than a multi-talented performer so the piano was put on the backburner.

After “Mona Lisa,” Nat King Cole had a continuous string of vocal hits during 1950-64 including “Unforgettable,” “Smile,” “(I Love You) For Sentimental Reasons,” “Too Young,” “Walkin’ My Baby Back Home,” “Send For Me,” “When I Fall In Love,” “Pretend,” “Answer Me, My Love,” and finally “L-O-V-E.” By the mid-1950s, his competitors were no longer Earl Hines and George Shearing but Frank Sinatra and Dean Martin. During an era when African-American performers in the pop world could only go up so high, Cole helped to pierce the ceiling. The soft-spoken performer was attractive to women and non-threatening to men, he exuded class and, like Bing Crosby his singing always sounded effortless and natural. He became an international star.

The jazz world was not pleased, particularly with some of his sappier ballad albums with arranger Gordon Jenkins or such hits as “Ramblin’ Rose” and “The Hazy Lazy Crazy Days Of Summer,” but Cole gained in popularity every year. While his jazz sessions were secondary, he did not give up performing jazz entirely. Sessions with arrangers Billy May and Nelson Riddle sometimes featured him as a big band singer.

He recorded a few rare sets on piano including the After Midnight album which featured him in quartets (his trio with guitarist John Collins plus a guest horn soloist) although none of those swinging performances were instrumentals. When he toured Europe in the early 1960s with the Quincy Jones big band, the European audiences gave him a cold reception until, with Jones’ urging, Cole sat down at the piano and played a few jazz standards. He showed during those concerts (some of which are available on CD) that he had not lost a thing in his piano playing.

Being African-American resulted in Cole being subject to racism despite his celebrity status. He had to fight to move to what had been a segregated area in Los Angeles. He was physically attacked (but not seriously hurt) at a concert in Birmingham, Alabama in 1956. And his groundbreaking television series of 1956-57 was cancelled after a year because it could not get a national sponsor for a black performer despite its impressive ratings. Many of those programs, which sometimes include jazz performances (including an episode with the Jazz At The Philharmonic All-Stars), have fortunately been released on DVD.

In his career, Nat King Cole appeared in many short musical films (such as Soundies and Snader Transcriptions) and even some regular films including Istanbul, China Gate, Night Of The Quarter Moon, and as W.C. Handy in the fictional St. Louis Blues. His last role was as a typically likable troubadour in Cat Ballou.

Despite the rise of rock and roll and the Beatles, Nat King Cole’s career was going fine until the fall of 1964 when he was diagnosed with lung cancer. A lifelong smoker, Cole’s health declined quickly and he passed away on February 15, 1965, when he was just 45.

In his career and beyond, Nat King Cole had more than 150 singles that made it to the Billboard charts (Pop, R&B and Country) and sold more than 50 million records. His daughter Natalie used film of her father to sing a very popular posthumous duet with him on “Unforgettable,” and his classic recording of “The Christmas Song” made the charts again during the holiday season of 2017. His influence as a singer and leader of trios can be heard in the performances of Diana Krall, John Pizzarelli, and many others.

It is fair to say that the unforgettable Nat King Cole, whose 100th birthday would have been in 2019, has little chance of being forgotten.