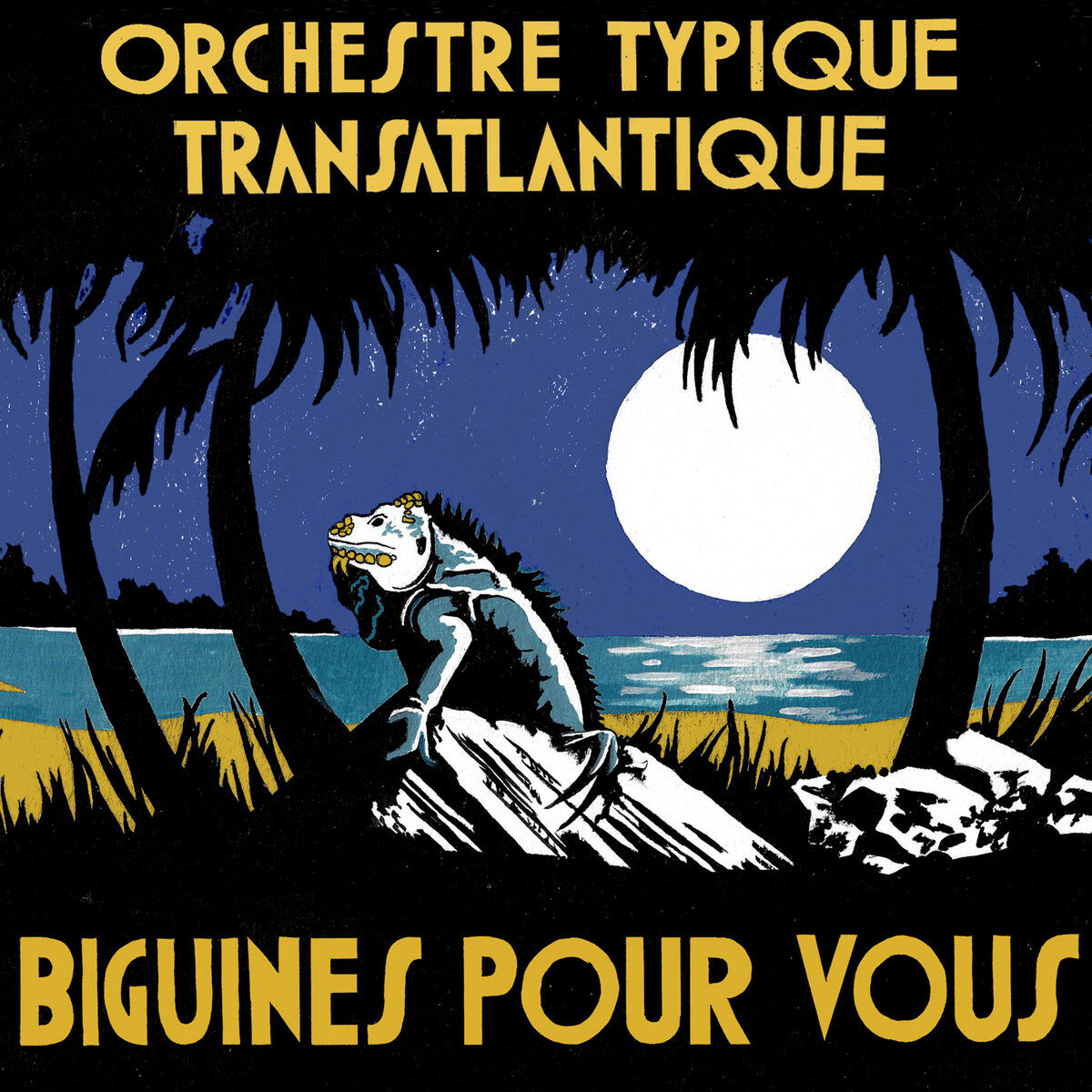 What was the Caribbean up to while New Orleans, New York, and Chicago were bouncing to the sounds of ragtime, jazz, and swing? If you’re like me—someone relatively well versed in jazz, but primarily where it intersects with swing dance—then “biguine” might conjure images of Cole Porter, Artie Shaw, Broadway musicals, and tea dances. In this case, the word follows “begin” and “the” and its precise meaning is probably hazy.

But what you’re thinking of would be “beguine”—a word with similarly Caribbean origins but a slightly different meaning. A biguine, it turns out, is a creole style of music from 19th-century Martinique blending European and African influences. (Sound familiar?) Biguines Pour Vous is a collection of 13 biguines, valses, and mazouks made famous by some of Martinique and Guadeloupe’s biggest dance orchestras from the 1920s to the 1950s. Recorded here by the newly minted Orchestre Typique Transatlantique, it features top jazz talent from Australia (Michael McQuaid, reeds), the UK (including Nicholas D. Ball, percussion) and US (Charlie Halloran, brass).

What does it sound like? Synaesthetes should have a riot with this one, being as it is a rainbow of colors and unusual textures not found in the average jazz record. Be it Andrew Oliver’s gently pulsing piano on the likes of “Miranda,” Ball’s tropical-sounding percussion on “Renée” or the brain-twisting 12-beat intro to “El Vagabundo”—which will have listeners like me rewinding with a “Wait, what was that again?”—there’s a lot for even dedicated jazz fans to get their ears around.

I’m especially fond of the way “Retour au Pays” abruptly ends mid-section, on the second note of the key, without resolving this harmonic tension. It’s as though the recorder ran out of tape—except we know that such an elite outfit wouldn’t let that happen. It reminds me of “Take the A Train” as heard on Ellington’s disc in the Columbia Jazz Lives series (2008). In it, the Duke stubbornly refuses to play those notes over which a vocalist would sing “Harlem,” leaving the phrase similarly unresolved on C-sharp—the delectably discordant flat second of the key. It’s very spicy.

Can you dance to this disc? Easily, if you do ballroom. If you can tango (“Martinique”), waltz (“Tes Yeux!”), or rhumba (“Biguine Pour Vous”) then there’s a track or two on here for you. But although you won’t hear a traditional taa-ta-ta-taa of swung triplets from drummer Ball, Lindy and Balboa dancers shouldn’t have trouble finding something to swing out to. Think a little creatively and there’s a tune here for every swing style. Some tracks even feature bewitchingly strange time signatures—like “Rate La” in 6/4 or “Cherie” with its 12/4 meter—which would pose swing dancers an interesting challenge indeed.

I do take one or two issues with the mix. I’m heavily biased towards pianos—I make no secret of that fact—and Andrew Oliver’s jangly old upright has a delightful music hall charm about it. But there were one or two tracks on which it almost melted into the background. Turning up the stereo to get a better listen on “Retour au Pays,” I was soon blasted in the ear hole by a barrage of Michael McQuaid’s alto sax. Superbly well played, like everything on this album, but mixed perhaps a tad too loudly.

It’s also not a bass-heavy sound, owing to the lack of any kind of bass instrument. Oliver’s piano fills this role, and—combined with the quietness issue on a couple of tracks, mentioned above—he doesn’t make very heavy use of the lower end. This might be a matter of taste, but I found I had to max out the bass on my EQ to get something approaching a live band sound—anything less sounded a bit flat, like a 78 without the hissing and popping. And indeed, this may have been a deliberate choice on the producer’s part. Indeed, it’s a fabulous-sounding album for something recorded remotely.

But that hardly takes the shine off such an exciting, eclectic mix of Jazz Era music which might represent a new sound to many. So if swing is beginning to feel just a little bit predictable, do yourself a favor and get this new release for just $10 on Bandcamp now.