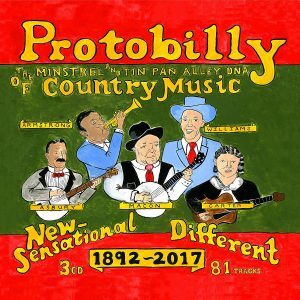 Protobilly is an in-depth exploration of the reverberations of American popular songs of the 19th Century and the Turn-of-the-Century through early country music in the 1920s and 1930s. Just as much of the early jazz repertoire came from 19th Century and early 20th Century popular songs that the pioneer jazz musicians had grown up with, the early country music recording artists adapted many of the same kinds of songs and tunes.

Three dozen Turn-of-the-Century recordings of vaudevillian performers are juxtaposed with recordings made in the ’twenties and ’thirties mainly by old-time country music artists. Also included are recordings by African American blues and jazz artists, expanding the concept laid out in the set’s already lengthy subtitle. The performers range from the very obscure to such legendary figures as Hank Williams and Louis Armstrong.

The accompanying 80-page booklet, set in generously large and readable type, gives information about the original songs and the performers, and is illustrated with vintage sheet music covers and photographs of performers. The digital transfers, especially of the earliest recordings, are superb.

The groups of songs show the many different kinds of transformations made by the later musicians. Some differ only slightly from the originals, as with Grandpa Jones’s 1947 version of the 1915 song “Are You From Dixie?.” In other cases, the more recent version is drastically changed, sometimes greatly improved. The 1927 song, “The Man Who Wrote ‘Home Sweet Home’ Never Was a Married Man,” recorded by North Carolina country musicians Charlie Parker and Mack Woolbright, keeps the chorus of the 1908 original with a slightly simplified melody, but has punchier, shorter verses that are almost entirely different from the sheet music.

Bill Monroe’s 1962 take on “When the Bees Are in the Hive” from 1904 is quite striking. The bluegrass master sings with powerful intensity, processing the old parlor song through his own distinctive musical aesthetic, making some harmonic changes, while following the basic outlines of the original.

The sentimental ballad “I Loved You Better Than You Knew” from 1893 is heard first in a “straight” performance by Byron G. Harlan and Frank C. Stanley made in the early 1900s. Then the Carter Family gives us their 1933 version that has a totally different melody, suggesting that they or their source had seen or heard only the lyrics, not the music. Sara Carter delivers the song of unrequited love with her characteristic deep emotion. Finally, Johnnie and Jack take off from the Carter Family version, with some further changes, making the 19th century song into Nashville honky-tonk music.

Traditional jazz is featured in the segments about the large and very old family of songs that includes “Alabama Bound” and “Don’t You Leave Me Here.” There are four examples: a 1910 instrumental by Prince’s Band that’s credited to composer Bob Hoffman of New Orleans, plus three African American versions. Black songster Charlie Jackson, accompanying himself on banjo-guitar, evokes very old traditions in his 1925 version of this proto-blues song. Monette Moore recorded a version in 1927 with Charles Johnson’s band from the Harlem nightclub Small’s Paradise, putting the song solidly in the traditional jazz repertoire. Finally, there’s a Louis Jordan version from 1940 done in driving swing style.

One of the most essential of the earliest published blues had an offensive title (“[N-word] Blues”), but has since been known by its first line, “The blues ain’t nothin’ but a good man feelin’ bad.” George O’Connor gives us the published version from 1916 that sticks to the truly classic melody in the sheet music. Georgia White delivers an energetic rendition from 1938 that has boogie-woogie piano accompaniment foreshadowing early rhythm-and-blues style.

There are a good number of tunes that began in the 19th Century minstrel shows, such as the familiar “Turkey in the Straw” and “Old Dan Tucker.” A few of the oldest tracks give us samples of the musical styles of the minstrel show performers. Charles A. Ashbury’s 1891 cylinder of “Haul the Woodpile Down” may be the only recording we have of real minstrel banjo style. Then, in Uncle Dave Macon’s 1927 “Hold the Woodpile Down,” we hear how the minstrel banjo style influenced music that was played on the Grand Ol’ Opry in its early days. I strongly suspect that Uncle Dave’s energetic singing, kicking off each line slightly ahead of the beat, also owes a lot to the styles of minstrel show performers.

“Who Broke the Lock?” seems to have originated with 19th Century African American minstrel performers. The 1898 recording by Cousins and De Moss gives us a glimpse into that tradition that underlies ragtime, early blues, and early jazz. The 1933 rendition by The Georgia Browns, with harmonica and guitars, is the kind of black party music known as hokum. Jack Bland & His Rhythmakers, an integrated band that included Henry “Red” Allen and Pee Wee Russell, took on the tune in 1932, making the simple old song into a vehicle for some blisteringly hot jazz.

Early recording star Arthur Collins makes a couple of appearances, on “Steamboat Bill” and “My Money Never Gives Out.” He was a white professional singer from New Jersey who had exceptional skill in creating character voices. Best-known for singing “The Preacher and the Bear” and other “coon songs” and ragtime songs, he adopted a voice and style very close to those of the great African American star Bert Williams, even recording some of the same songs. Although he was performing in the blackface tradition that we now regard as disrespectful, he always sounds like he is sympathetically inhabiting his black characters. Collins reminds us that white Americans were admiring, imitating, and taking inspiration from black singers long before Elvis Presley recorded “That’s All Right, Mama.”

A few tracks from recent years by Frank Corso, Keith Whitley, and Dom Flemons demonstrate that these songs are still vital after a century or more.

Protobilly looks at the entirety of American vernacular music from a distinctive vantage point. Racial, stylistic, and chronological distinctions become but details in the big picture. The producers chose to make a limited selection, in order to keep what could have been a set of many CDs to a manageable size. The notes refer to some of the other versions of the songs in the set. Many additional songs that fit the theme crossed my mind as I listened through the CDs. Tops on that list are all the Ragtime Era songs and tunes recorded by Charlie Poole which are included, along with earlier recordings of the same numbers, on Henry Sapoznik’s superb box set, You Ain’t Talkin’ to Me, for Sony Legacy, which is long out of print. I am very interested to see what shows up at the forthcoming blog, which the liner notes say will have “additional information, extended essays, period newspaper clippings, and sheet music.”

This engrossing, thoroughly researched, and well-produced collection will take a place alongside such classic sets as the Anthology of American Folk Music and That Devilin’ Tune. Protobilly follows many of the threads which weave together into the vast tapestry of American vernacular music, showing how musicians of different races, working in various styles, draw inspiration from one another. Even in recent years, some popular music stars like the Grateful Dead and Leon Redbone have drawn from historical American songs and styles, and, of course, revivalists in folk, roots music, and traditional jazz are all making sure the old traditions are alive and well in the 21st Century.

Protobilly shows us ways to navigate and make sense of America’s 135 years of recorded music and two centuries of printed music. We end up seeing a national body of expression that is often both black and white, and that harks back to its roots while simultaneously creating new shoots for the present moment.

Hoyle Osborne is a performer of historical American vernacular music of several genres, including ragtime, early Tin Pan Alley, and early country music. He performed the old-time saloon music in "Cowboys & Aliens" and played the Diamond Belle Saloon in Durango, Colorado for 20 years. Write him at [email protected]