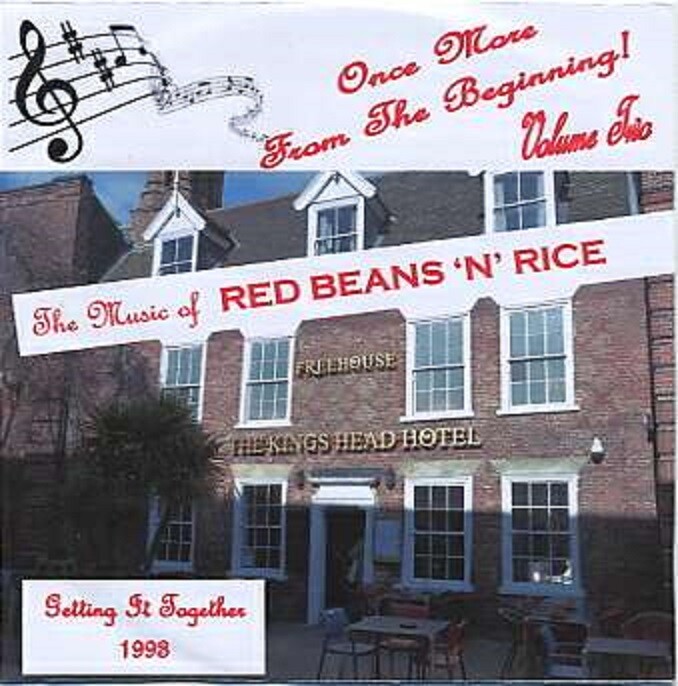 In this second volume of Once More from the Beginning! by the Red Beans ’n’ Rice Jazz Band, Stuart McLean continues his recounting of the band’s story in his liner notes. While Volume One presented performances from 1996, 1998, and 1999, this volume focuses on the period shortly after the band’s forming in 1992, with “some early recordings that have now come to light” from 1993, he informs us. Many of the same personnel from Volume One are to be found on Volume Two, John “Dusso” Winter on trumpet being the only “newcomer” here. He provides a solid lead and on several tracks, a vocal.

The tune list over the two CD’s is a varied one, including blues, marches, pop songs, spirituals—something for everyone—and by a variety of composers, including Buddy Bolden, Jelly Roll Morton, King Oliver, W.C. Handy, to mention a few. I should imagine the titles will be familiar to most folks. “Uptown Bumps” is more usually titled “The Bucket’s Got a Hole in It,” perhaps, and there is a bit of confusion over “San Jacinto Stomp.” Some people claim that George Lewis co-opted another tune, “You Can’t Escape from Me,” just giving it the “San Jacinto Stomp” title. And to confuse the issue further, there is the tune titled “I Can’t Escape from You,” which some people claim is simply a refocusing of “You Can’t Escape from Me!” Since “I Can’t Escape from You” is also on this album, one gets the chance to compare “San Jacinto Stop” with it and decide if they are the same tune or different ones.

Speaking of “recognizing” tunes, I found myself having some problems with such now and again. Mr. Morton once said, “My theory is to never discard the melody. Always have the melody going some kind of a way.” Sometimes I found this not to be the case here. For instance, “Milenberg Joys” did not become clear for me until about half way through when the clarinet took the lead. The piece does not open with the usual ascending arpeggio, nor is it alluded to anywhere in the track, so until I got my bearings with the clarinet, I was a little lost. Another cut where I had difficulty was “I’m Travelling.” This is a tune which is not often trotted out by bands, the most memorable one for me being the rendition by the Crane River Jazz Band, led by Ken Colyer, at the famous July 14, 1951, Royal Festival Hall concert organized by the National Federation of Jazz Organization. But the track is enjoyable, even though a bit mysterious.

As before, the band leans heavily on ensemble work, which gets no complaint from me. The solos that are to be heard are spread out fairly evenly mainly among the front line, the back line tending to be simply supportive. There are a good number of clarinet-trombone duets, where each instrument plays lead and counterpoint in turn, and that, in turn, lends much interest. The rhythm section is generally dependable regarding tempos, but once or twice it tends to rush a little as, for example, on “Bye and Bye” and “Uptown Bumps.” These tend to be minor cavils, however.

A slightly more significant shortcoming is in the sound quality, where there is little or no separation of instruments, resulting in a certain “muddiness.” As Stuart McLean cautions in the insert notes, “Recording equipment in those days was not as sophisticated as it is today, the sound being recorded onto audio tape, often by simple little recording machines with single mono reception. Taking that into consideration, the band still managed to sound pretty good…” As the contents of these two CDs attest, it did, indeed, manage to sound “pretty good.”

Once More from the Beginning! Vol. 2: “Getting It Together”
Red Bean ’n’ Rice
Practical Sound Systems (no number)