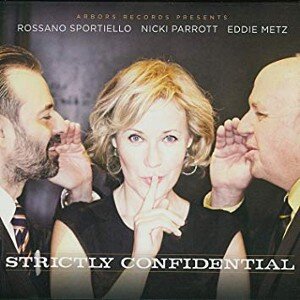 Overall, it’s an interesting selection, not the usual mainstream songs that are normally played. There’s “Pure Imagination” from the 1971 film, Willy Wonka and the Chocolate Factory, the Carpenters’ “Close to You,” Errol Garner’s classic “Misty,” a couple of Ellington numbers, Teddy Wilson’s “Sunny Morning” (where Eddie pays tribute to one of his mentors, the late Jake Hanna), along with two of my favorites from the Basie book, “Shiny Stockings” and “Shoe Shine Boy.”

Nicki does her usual classy vocalizing on four tunes along with demonstrating her masterful skills on the acoustic bass.

As Rossano points out in the liner notes: “There are stages in our lives associated with certain songs, and through those songs memories come back to us with a nostalgic feeling—sometimes with outbursts of happiness, sometimes with pangs of sorrow, and sometimes with quiet reflection. It’s the deeper role music often plays in most people’s lives, beyond mere entertainment.”

Don’t let the title put you off. It’s 15 tunes that present different jazz idioms and musical genres and as noted on the sleeve, are “For your ears only.”