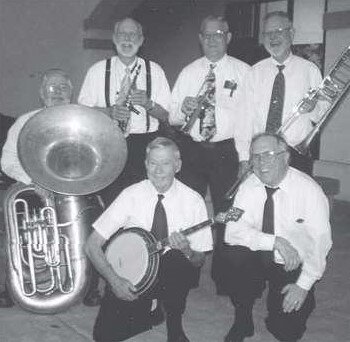 Ted Shafer is an example of a musician who has a pocket-full of experiences and musical involvements that set a lifelong musical course that got its start in 1947 at a Sigma Chi dance at the University of Rochester. “A jazz band lead by trombonist Ray Murphy was the first time I heard real jazz being played live,” Ted recalled. Needless to say, he was hooked!

Born in Rochester in 1925 and raised in the state’s Finger Lake region, Ted indicates he “never heard such infectious sounds.” However, it would take 12 years, including earning a degree in English and a two-year hitch in the U.S. Army before he started gathering stacks of shellac 78s with the great music of jazz legends, such as Lu Watters, Bix Beiderbecke, Louis Armstrong and Ferdinand “Jelly Roll” Morton to name a few. While working at Rochester’s Photostat Corp. in Cincinnati and listening to such bands as Gene Mayo’s Dixieland Rhythm Kings and Carl Halen’s Gin Bottle Seven he developed a burning desire to play the banjo and form his own band.

He moved closer to this goal in 1957 when his company transferred him to Los Angeles. For the next few years he increased his banjo playing proficiency and spent a number of weekends flying to San Francisco to hear the Great Pacific Jazz Band.

While in the Bay city he spent hours with GPJB band members Charles Sonnanstine and Robin Wetterau discussing how to form a band. This lead to two years of band rehearsals in pianist Don Martin’s living room in Van Nuys. Ted wanted a band that played like the two-cornet Great Pacific Jazz Band and Lu Watters Yerba Buena Jazz Band and somewhat similar to Joe “King” Oliver’s Creole Jazz Band. By 1959 Ted was satisfied that he had assembled and rehearsed a group that was worthy of carrying the moniker of jazz great “Jelly Roll” Morton.

“Our first gig was on Sundays at Santa Monica’s Nickelodeon which lasted four months.” The popularity of the group increased leading to prestigious engagements in the Los Angeles area and recordings in 1964. Ted even formed a smaller band to respond to small group requests. Also in 1964 Ted started the Merry Makers Record Company which produced 12″ vinyl LPs and the smaller 45s. Later tape formats took over and in more recent years most new recordings are issued as CDs. Although it should be noted that today a number of companies still produce a small number of new and reissued vinyl LPs.

It was in 1965 that Ted joined the Microfilm Company which led to his moving to San Francisco to be nearer the Bay Area music scene. Once again he formed new bands: An eight-piece band like the first Los Angeles group that was similar to Joe “King” Oliver’s Creole Jazz Band of the 1920s and a five-piece New Orleans style 4/4 group. After playing for five years, Ted decided to retire from banjo playing to develop a new copy repair and supply business as well as directing his Suisun City-based Merry Makers Record Company.

Ted presently has over 50 CDs on the Merry Makers label including his own band and the bands of Turk Murphy, Lu Watters, Don Nealy, Earl Scheelar and South Frisco Jazz Band. Remember the English degree Ted Earned from Rochester? Well in 1978 he combined his English training with his love of flying to publish an adventure/suspense novel: “Jimmy Beebe and the Great SilverAir Fleet.” Ted indicates “Jimmy Beebe is a fictional character.”

It was in 1989 that Ted got inspired to return to playing upon learning of the death of Lu Watters. It wasn’t long before he recaptured his banjo playing skills and reactivated his Jelly Roll Jazz Band with a core group that includes himself on banjo, Glenn Calkins on trombone (and saxophone), Jim O’Briant on tuba, Earl Scheelar on cornet, Pete Main, reeds and Tom Barneby, piano.

The band quickly regained its prominence and presently is developing a fan base in the hills of San Pablo, CA (northeast of Berkeley),It may seem strange that Ted’s group found a following for traditional jazz in San Pablo but even stranger is the fact the band plays every Friday night at Champa which features Southeast Asia cuisine.

The Jelly Roll Jazz Band has also been featured at the New Orleans Jazz Club of Northern California which met at the San Pablo Moose Lodge until recently. In February, the band appeared at the NOJC’s Annual Showcase of Bands with The Jazzinators, Mission Gold JB, Cell Block 7 and Chris Bradley’s Traditional JB. The band also appeared at the Waterfront Jazz Series at Suisun City Harbor Plaza on July 11.

As Ted points out, “the Jelly Roll Jazz Band is a dance band. Most of its tempos are dancer-friendly. Unlike many other Dixieland groups, the JRJB doesn’t feature drum interludes or off-beat solos. Our music is designed for dancers. The band is made up of experienced musicians who are clearly comfortable playing with each other.”

Because of his dedication to trad jazz music, the band’s repertoire not only includes the recognizable tunes of the period but also presents some little known tunes that are featured on their latest CD, “Ted Shaffer’s Jelly Roll Jazz Band 2009 – Band’s 50th Anniversary, New Orleans Jazz.” Among the 21 featured tunes are Ostrich Walk, Aunt Hagar’s Blues, Tiger Moan, Snag It, Grandpa’s Spells, The King of Zulus, Here Comes the Hot Tamale Man, and King Oliver’s Room Rent Blues.

Jelly Roll Jazz Band CDs are now available through Amazon.com or Merry Makers. From the earlier CDs to the 2009 release, Ted has recorded with over 50 leading Bay Area musicians, even his two friends and advisors Charles Sonnanstine and Robin Wetterau from the Great Pacific Jazz Band. Many West Coast jazz aficionados will remember the magic horn of “Papa Ray” Ronnei with Vince Saunders’ South Frisco Jazz Band. Before joining the band he had played with Ted Shafer’s band. Merry Makers Records released a CD of the South Frisco JB playing live at the Pizza Palace in 1968 by clarinetist Ron Going, “telling the story of just how exciting a time 1968-69 was for fans of Ray Ronnei’s cornet playing.” Although Ronnei is not actively performing today, he composed a tune “Salty Bubble” that was used in the 2009 Woody Allen film “Whatever Works.”

Like Watters, who was fairly free with his music, Ted’s dedication and determination to keeping classic jazz alive is evident in the fact that Merry Makers is making available 300 transcribed original arrangements for jazz bands for a modest cost. Asked his prognosis for the future of traditional jazz, Ted noted that “the internet is really helping our business. Websites like YouTube, Facebook, jazzbymail and others are displaying our bands and attracting younger interest to traditional jazz. I hope I’m around many years to guarantee that traditional jazz has its place in the annals of musical interests.” Still playing at 84, Raymond Theodore “Ted” Shafer may not be the most well known banjo player and band leader in the country, but in California and the Greater San Francisco Bay Area, he’s a classic jazz man of distinction.

Frank Grace was a writer and journalist who compiled "The Festival Roundup" and wrote other stories for our predecessor The American Rag. He died in 2015.