The Beaux of Bronx Park 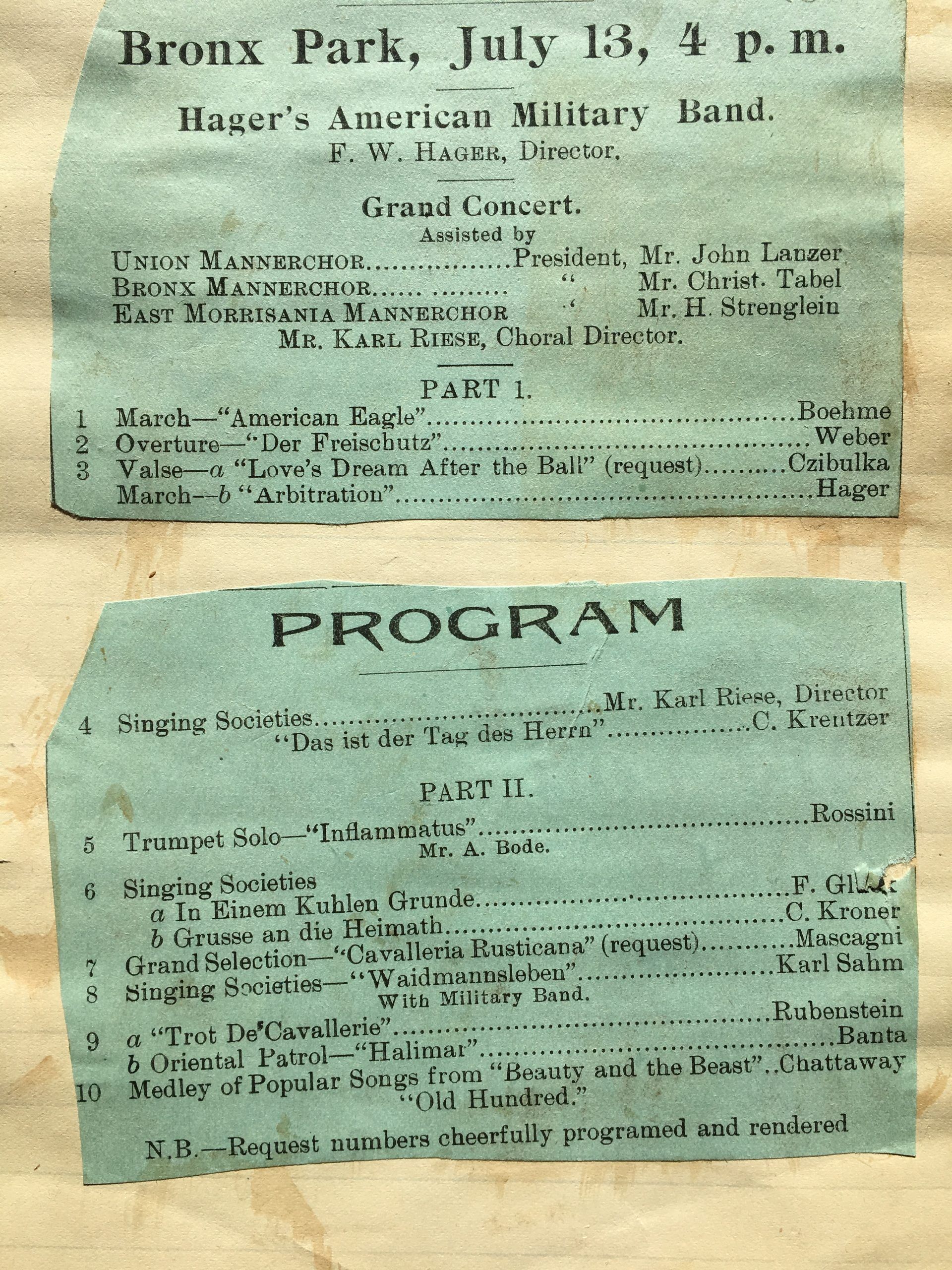 In the 1890s and 1900s, military bands were all the rage. From Gilmore’s band to your village community band, they were loved by everyone. One trend that came along with this fad included these bands and orchestras performing at local parks. Some of you may have heard of Arthur Pryor’s weekly gig performing at Ashbury Park in New Jersey, and this is exactly the sort of thing each town or county did all over the United States. Fellow recording star Fred W. Hager also led his band at a local park, almost competing with Pryor’s. Within the pages of Hager’s scrapbook, he provided a very thorough and unique look into this long forgotten tradition.

In Hager’s scrapbook, there are dozens of cut out pages from these various programs he conducted at St. Mary’s park in the Bronx. According to one source he clipped and pasted, he had been performing there weekly in the summer since 1896. The latest programs date from the summer of 1903. The majority of the programs date from 1901 to 1902, and thankfully Hager put them in chronological order, so we can see how they changed over time, and see how long certain pieces were popular. A lot of these program fragments can also help record collectors determine when his band and orchestra recorded certain pieces, creating a sort of timeline for dating a certain period of Zon-O-Phone and Columbia records.

These weekly performances began around the middle of the day on Sundays in the summer, usually beginning with a different band from Hager’s. Over the course of the day, it was said that several thousand people would attend the concerts. With so many people there at the park grand lawn, there were certainly issues with rowdy crowds. One page from Hager’s scrapbook saved a complaint from a local who attended several weekend concerts there. Another page, dated July 12, 1903, includes the most descriptive article about these weekend concerts, it reads thus:

Folks in The Bronx are to be entertained again by the band concert in Bronx Park which is to be rendered this afternoon by Hager’s popular band of over forty pieces. Mr. Hager’s reputation as a band leader is widespread, and his return to Bronx Park has not only met with popular favor, but has drawn the largest attendance at a band concert this season, numbering over 15,000 people rendered at a concert last Sunday.

Hager, being the proud and vain man he always was, kept many of these glowing reviews of the concerts, and of himself in this regard, another from 1901 reads thus:

Frederick Hager, who conducts the St. Mary’s band, is one of the youngest baton wielders in the profession. He is a rising man. Many of the forty-five musicians in his ranks were obtained from Victor Herbert’s Pittsburgh orchestra.

Considering how much positive press Hager and his band was getting, there were the occasional complaints and mocking locals. Folks who came to these concerts saw Hager as a performer more than a conductor like Sousa or Patrick Gilmore, as he was always willing to go and talk up all the local business people and bigwigs, being the unabashed hustler he was. Here is what one of the negative complaints claimed:

Through your valuable paper I wish to call attention to the way the young people that gather in St. Mary’s Park at afternoon concerts rush after the programmes, and after receiving same destroy them. The distributor does not seem to care who he gives them to, and throws them to the wind in the scramble. The people seated in the circle around the band-stand often do not see a programme because of this disturbance. — A taxpayer.

Such misbehavior would have certainly frustrated Hager, as he was a perfectionist with his band and orchestra. One of the clippings he saved describes Hager as “a strict disciplinarian” with his orchestra, who takes his job very seriously. For example, it is likely that he listened to every one of his orchestra and band records to make sure they were acceptable for sale. I hypothesize this because a majority of the descriptions of the band and orchestra records in Zon-O-Phone supplements at this time were exceptionally detailed, much like his own rather poetic and wordy personal writing. With a combination of his perfectionism and tune selections, his aim was to please everyone at these concerts.

He played some of the most common overtures, like that of Wagner’s The Flying Dutchman, but also syncopated and eccentric rags such as “a Southern Jambouree” and Frank P. Banta’s “Halimar.” Ever characteristic of Hager, throughout their last three years at the park, the requested encore in each programme was Justin Ring’s “Falling Leaves.” Surely the regular patrons became quite familiar with this semi-classical waltz, but thankfully it was changed to other pieces depending upon the occasion. Hager included Ring in as many ways he could, as there was no piano or violin at these band concerts.

On a few of the pages, there are full length schedules of the park concerts in the boroughs of New York for the weekend. These pages are certainly among the only surviving pages from these local papers. One page even speaks of Voss’s first regiment band of Newark New Jersey. Voss’s band is a completely unknown group of the competitive military band age, though they recorded hundreds of times in the 1890s. Their personnel included some of the most prominent early recording stars, such as Edward Issler and George Schweinfest.

In spite of this, Hager was mostly concerned with his own performances, setting an example for those rowdy young folks by keeping every one of his programmes. A few sample disc records from these concerts survive, ones he would hand out to attendees of the concerts. Thanks to his obsessive preservation, just enough of these pages survive to give us a unique look into a community of musicians that very few have studied in detail.