The Ragtime Era and the Birth of Public Television

As Max Morath celebrates his 95th birthday on October 1st this year, we are reminded of his career that spanned eight decades and included nearly every entertainment medium. If Scott Joplin was known as “The Entertainer” in his day, then Max deserves the title for his contributions to the entertainment industry in our era.

Among the many landmark events of his career is the 1959-1960 television series titled The Ragtime Years. He created it for the Denver Educational Television Station KRMA in Denver Colorado.

In the earliest days of educational television, the clever and erudite lectures of Dr. Frank Baxter were featured. They were, as the National Educational Television (NET) network intended, informative. However, in 1960, Max pioneered a new concept for American educational TV illustrating that information can also entertain. That was the essence of his work, that and informing the public about an important era of America’s popular culture.

In his PBS Companion: A History of Public Television (TV Books, 1999) author and early PBS executive David Stewart devoted the entire third chapter to Max Morath’s The Ragtime Era, a 12-part NET series. In a 1996 Current Internet article Stewart declared it to be “the most watched noncommercial series up to that time, run and rerun constantly by all the educational (and many commercial) stations throughout the country.

Max Morath is certainly accomplished a great deal in the field of educational documentary television and the back story to this landmark series is nearly as entertaining as the programs themselves. Max provided details of his early career for the article in the August 2021 issue of TST. This month the details of producing The Ragtime Era, followed by the 13-part Turn of the Century series are described.

Max already had a growing reputation as a ragtime entertainer and historian by 1959 as a result of his popular appearances around the country and his summer work at the Imperial Hotel in Cripple Creek, Colorado. He had also been working at the Colorado Springs station KKTV and the Denver Station KRMA. There he applied production skills gained from his Stanford University Radio-Television Institute studies in 1951. His reputation as a fine entertainer and ragtime historian came to the attention of Jim Case, program Manager at KRMA TV in Denver where Max was working at the time. Case had commercial network experience and as an NBC intern in New York he had worked on The Hoody Doody Show and Your Show of Shows.

As Max was gaining his new valuable experience, National Educational Television was attempting to define its mission and was about to transition and become the Public Broadcasting System (PBS). They were looking for a way to make educational television entertaining as well as informative without being stuffy or elitist.

At this juncture several elements fell into place resulting in Max’s notable series. First Marvin Hall, who had been stage managing for the Cripple Creek Melodramas and was a close friend of Max, was a producer at KRMA, Denver. It was one of the 22 major educationally oriented stations in the country and was owned and operated by the Denver Public School system. KRMA had a new state of the art studio built just for video tape productions and a very talented crew thanks in part to funding by the Ford Foundation. The station also had three new video cameras enabling far more creative camera angles. (They replaced the commonly used Kinescope cameras then in use with the added advantage that videotape could be edited…when they learned the technique.)

With the challenge to produce something educationally entertaining, Jim Case the KRMA Program Manager hired Morath and Hall to produce a 12-part ragtime series. The production process was phenomenal, and the result made history.

The series was Moss Hall’s idea. He knew from their Cripple Creek days that Max had become an authority on the history of ragtime and was a great entertainer. Hall also knew NET was generally only using a verbal presentation for their programs and he knew how visually dramatic elements could enhance the informational side of a production.

Max was wisely hired to write, act, and perform and he quickly set about creating the scripts and production notes for the episodes in 1959. The original working title was Before Jazz. Max would go on to be directly involved in the production of each episode as they were created. His script documents and materials associated with this early series are now in the Morath Papers Archive in the Hornbeck Library, Special Collections Division, of the University of Maryland. This is an invaluable collection just waiting to support a doctoral level dissertation on the concept of the educational documentary.

Max enjoys telling the story of the educational consultant the station felt they needed, hired from the Colorado College Music Department whose compensation was part of the $22,000 budget. However, no one seems to remember ever seeing the consultant at work, Max filled that position.

Max related that the first challenge the team faced was the fact that the state-of-the-art studio was being used every day from noon until early evening. And though that placed great restrictions on the production team, the talented crew worked within the restraints. Therefore, the design and set crews had to work all night and the production team began taping at 8 AM but had to stop in time to completely clear the studio for an 11:45 AM show. It was a frantic enterprise considering the crew even painted oriental carpets on the floor that had to be covered.

Though video tape could be edited, no one yet knew how to do it properly, so each show was taped from start to finish without a pause. Max wrote the scripts, memorized his lines, and delivered them along with piano numbers straight through with three cameras rolling and the director calling the shots. NET was elated with the first few results. It looked like commercial television only it was deliberately educational.

David Stewart wrote 40 years later, “two characteristics [stand out]—the extraordinary amount of information in each program and the intensity Max brings to his work.” That intensity marked everything Max accomplished in his long career.

Max dressed the part, too, in 1890s attire from his striped trousers to a derby hat and all the other cast members were likewise properly attired. Vintage clothing stores, costume departments and antique stores were scavenged for necessary props and clothing.

Jim Case remarked in 1996, “Max could go through the camera. It was his presence that gave the programs their authority. People believed in him…There were no temperamental problems…We never had an argument.”

The introductory episode on the 1890s was titled, “The Mauve Decade” after David Beer’s book on American manners in that era. Max followed with programs explaining the terms related to ragtime, and then he went on to cover the technology that produced the “The Player Piano,” and the rolls they played. The Blues, Tin Pan Alley, World War I patriotic music, Sousa’s march music, George M. Cohan and stage musicals, jazz, ballads, the roaring ’20s, and barbershop harmony each had at least one separate segment, replete with appropriate sets, costumes, and props. The sets ranged from a saloon to a bordello, a dance hall with a grand piano to a military encampment. 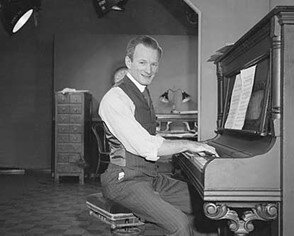 The series became the most popular programs on television in the early 1960s and it was replayed over and over. When a location lacked an educational station, it ran on commercial television. The programs certainly entertained, and the country was also made of aware of its rich musical heritage, not to mention the history of the nation at the beginning of the 20th century.

Today among his many achievements, Max Morath is considered a pioneer in public Broadcasting having been primarily responsible for the first modern American educational documentary. And there is a footnote to Max’s phenomenal story. In 2015, nearly 60 years after their work together in Cripple Creek, Colorado, and on The Ragtime Era, two old friends collaborated again. Then in their late 80s, Max Morath and Moss Hall, won the Nashville Film Festival award for their screenplay titled Blind Boone. These two men are still in touch, Hall in California, and Morath in Minnesota. Incidentally Hall changed his name to Moss because his small son couldn’t pronounce Marvin.

Jack White, the first president of NET in 1960, declared that the network bought the series “because it was FUN…it was clean and fun.”

Thus, as he celebrates this October, join me in gratefully wishing Max a Happy Birthday as a great entertainer of our ragtime generation.

This is the third in a series of articles with Max Morath on his career in entertainment. Larry Melton is at [email protected]