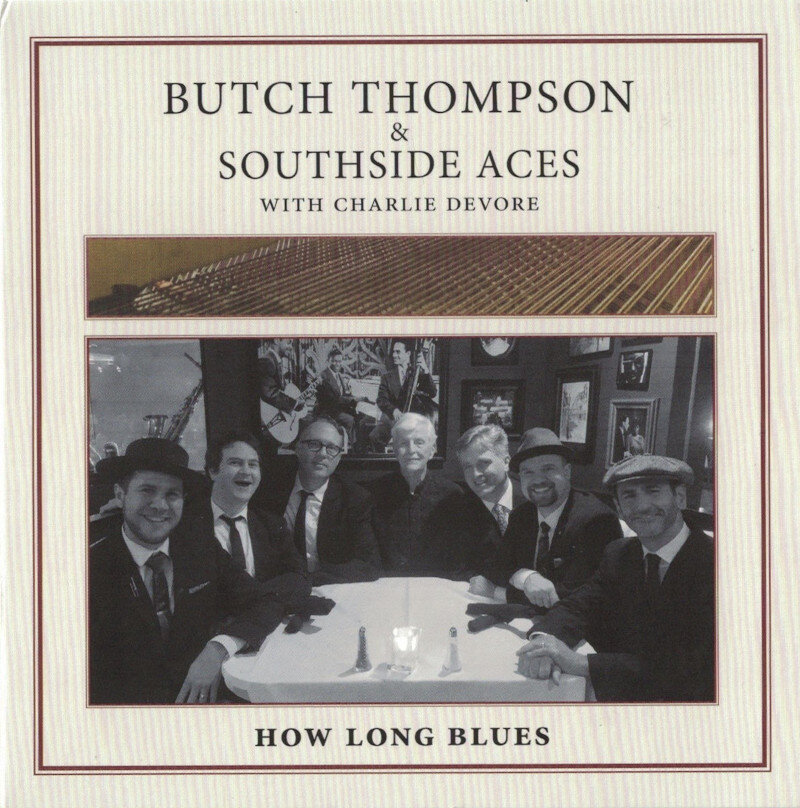 Minnesota has a remarkable traditionally jazz history full of larger than life figures. The Hall Brothers Band and their Emporium of Jazz makes up a big part of that history, as Tony Balluff began chronicling in the December issue. But local jazz didn’t stop or start with them. One among several significant Minnesota players Balluff himself got his Southside Aces rolling six albums and twenty years ago. Not exactly young anymore the Aces have had respect for their elders baked into the band’s DNA from the beginning.

Balluff is uniquely suited to write the history of the Hall Brothers, a band from before his own time, because he has been collecting the history of the band in extensive interviews and rare photographs for years. That multi generational appreciation of the jazz scene he finds himself in has never been more in evidence than on the Aces latest release Butch Thompson & Southside Aces with Charlie Devore: How Long Blues.

Butch Thompson is best known for his 12 years leading the house band on Prairie Home Companion and frequent appearances thereafter. A native Minnesotan he fit the shows lake country shtick. He started a jazz band while still in high school and joined the Hall Brothers immediately after graduation before relocating to New Orleans where he appeared at Preservation Hall in the 60s and 70s.

In 1974 he joined Prairie Home Companion as the house pianist and as the show grew so did his band. His extensive study of jazz and its history has led him to teach within academia and without, and he has toured the world as both a soloist and with three and eight piece versions of his band, releasing dozens of recordings. Now of a certain age, the Southside Aces are delighted that they have had frequent occasions for Butch Thompson to join them, one of which is captured in the live set on this record.

Charlie Devore also gets a mention on the album cover and for good reason. They call him “the sensational senior serenader” and he demonstrates unbounded enthusiasm for jazz even decades down the road from his days stationed by the Navy in New Orleans during the 1950s. Bill Russell, founder of American Music Records, encouraged him in his early efforts on the cornet and made sure he was introduced to all the greats playing in the city at that time. Returning to Minnesota he played cornet with the Hall Brothers and has remained active both in Minneapolis and New Orleans throughout his career, frequently joining Butch Thompson, Frank Chace, Doc Evans, and others.

Recorded at the Crooner’s Lounge and Supper Club in Minneapolis the album has the friendly laid back joy of a house party slyly caught on tape, though fortunately with an excellent source recording and balanced mixing. Several tracks are introduced with stories and exchanges between the band both funny and endearing. We hear from Butch and Charlie as well as the younger members of the band. Conveniently these intros are given their own track on the CD so they can be skipped if you’re just trying to get to the music.

Titles include throw backs to mid century New Orleans, including “Ice Cream” and a hot “Shake it and Break It (Weary Blues)”. They dedicate “One Night of Sin” to New Orleanian Dave Bartholomew who had recently died when this set was recorded in fall 2019. “Thanks a Million” closes the album and is dedicated to Bill Evans, an original Hall Brothers Band member who had also recently passed. The realities of time are ever present but in a way that adds warmth.

While the local flavor they favor is the rougher sound of the Bill Russell days this set is more mellow than most of those recordings. There’s a late in the day feel and the musicians listen to each other appreciatively even as most of the action keeps the appropriate ensemble focus.

The arrangements effectively highlight sub groupings, often Dan Eikmeier’s trumpet backed with a prominent rhythm but also other combos. Charlie Devore reserves himself for vocals on a handful of the eleven tracks. Butch gets plenty of time at the keys throughout and is given the title track, “How Long Blues”, as a piano solo.

A whole lot of joy in living shines through on this album and we are fortunate it was captured so well before the restrictions of the last year. They celebrated the release in October with an outdoor, socially distanced and masked performance. There’s no keeping these guys down.