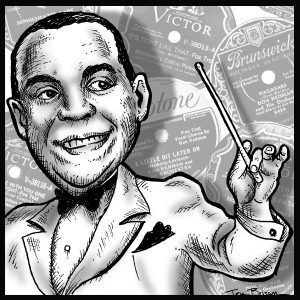 Don Redman was born July 29, 1900, in Piedmont, Mineral County, West Virginia. His parents were musical, so it was natural that he would take to music early on. When he was three years old he began on trumpet; he skillfully played all the wind instruments—plus piano—by age 12.

As a college-educated, conservatory-trained musician, Don Redman had no difficulty finding work in New York. In 1923, Fletcher Henderson took him on as a reedman, though he also sang and, most importantly, wrote arrangements for the Henderson Orchestra. From the outset, his charts shaped the classic sound of the band—and, ultimately, the sound of the great swing bands that would become popular a decade later. Henderson’s 1924 recording of “Copenhagen”—arguably the world’s first big band swing recording—featured an arrangement by Redman.

In 1927, he was hired away from Henderson by impresario and bandleader Jean Goldkette. Goldkette managed McKinney’s Cotton Pickers, and Redman’s arranging skills and his leadership abilities were a perfect fit for the group. Writing in tandem with trumpeter John Nesbitt, he made the band’s book one of the hottest in the country, with musicianship to match.

In 1931, Don Redman returned to Harlem to lead his own band at Connie’s Inn. At the same time, he was recording for Brunswick, and his recordings of that era were some of the most complex pre-Swing Era hot jazz arrangements of popular tunes. His band’s arrangements displayed a high level of sophistication that was seldom heard elsewhere.

In the later 1930s, he supplemented his band a swinging vocal group—The Swing Choir—to supplement his band, making a remarkable series of recordings for the jazz-oriented Variety label. These records (which may be found on YouTube) still sound fresh after eighty years.

By 1940, Redman left the band business to concentrate on writing charts for others. He continued to perform, traveling to Europe in 1946 to lead an all-star band. In the 1950s he was Pearl Bailey’s musical director.

He worked into the early 1960s, most notably playing soprano sax with Eubie Blake and Noble Sissle. Don Redman died in New York City on November 30, 1964.