Don’t Give the Name and Bad Place

I have been fighting several bold infections since Thanksgiving that have left me feeling lethargic as a petrified sloth. As a result, I have quite unsatisfactorily met my writing deadlines and simply tried to be content in my mobile chair while listening to records and CDs accumulated for years in anticipation of just such a period of malaise.

I recently reached for an LP that had been shoved back on the shelf and discovered it was unique, though its acquisition was unremembered. The title was Don’t Give the Name and Bad Place, From the old Gus Williams tune. I was not surprised to discover that Max Morath and Dick Hyman were involved in making a record with a title cleverly containing the flipped words.

Adding to the mystery, when I inquired about the record, Max had only a faint memory of its production and when I called Dick Hyman, he could barely recall it at all. Thus, my fascination was heightened. The New World Records LP from their Anthology of Recorded Music project contained 14 selections illustrating “Types and Stereotypes in American Musical Theater, 1870-1900.”

I soon managed to locate a wealth of information on-line, not only about the project from the label’s website but about the recording as well from Richard M. Sudhalter’s extensive liner notes.

It seems back in 1975 New World Records (NWR) with a hefty Rockefeller Foundation grant undertook to press a 100-disc anthology of American music, “encompassing the broadest possible spectrum of musical genres.” Unencumbered by political correctness, they could include objectionable lyrics and terms to accurately reveal just how offensive some of the original lyrics were. I am reminded that being politically correct is usually the ultimate in political incorrectness: ignoring the truth leads to a lie. Removing offensive terms from an 1890s song makes it appear that the lyrics were originally sanitized and that racial and ethnic bigotry never existed. And so, the significance of the words in the title.

The one hundred recordings pressed by NWR as part of this collection reveal a popular history of our music from the perspective of the national bicentennial. Individual recordings range from pieces played on an altered piano to the contemporary popular music of the mid-1970s. The statistics for the collection are quite impressive. The music of 500 composers from 1,200 individual pieces played by 1600 musicians. The collection was made available free of charge to 7,000 educational and cultural institutions around the world.

Many of the recordings are unique. For instance, the album titled Maple Leaf Rag: Ragtime in Rural America examines the way Black and White musicians interpreted the ragtime style outside of classic ragtime including the blues. The recording titled Shuffle Along includes a series of original recordings of the 1921 songs from the Noble Sissle and Eubie Blake shows. There are a number of titles relating to folk music, jazz and the blues with nearly every type and style of music represented. 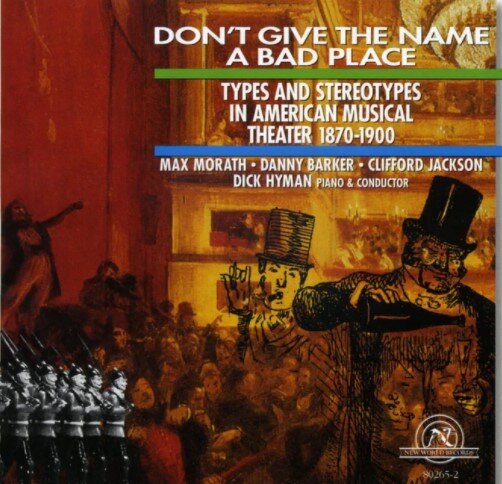 As for the Hyman/Morath album, their selections represented American musical theater in the last third of the Nineteenth Century. Sudhalter’s liner notes provide details about the people the perforformers represented. Dick and Max added Danny Baker and Clifford Jackson to their group and chose 14 pieces for the record (what we might call novelty pieces each illustrating an aspect of racial or ethnic stereotyping). With Dick Hyman on piano and conducting the quartet, that left Morath to gather the music and sing the tenor (Irish) parts. Clifford Jackson sang the German roles and it fell to Danny Barker to handle the more controversial Black numbers. A quartet sang the general other numbers: Lois Winter, Soprano; Rose Marie Jun, alto; Phil Olsen, Tenor; and Charles MacGruder, Bass.

Dick Hyman had 7 recordings in the same period: Charleston (Columbia); Scott Joplin (MCA); Themes and Variations on “A Child is Born” (Chiaroscuro): Traditional Jazz Piano (Project 3); The Music of Jelly Roll (Smithsonian Records); Come and Trip It (New World Records); Say it with Music (World Jazz) and a prodidigious production in the following decades.

The Anthology of American Music would make a marvelous teaching base for a course in American popular music which would actually be a combined history, literature, sociology, economics, geography, and music course, team-taught over several semesters. The 100 recordings are available today for $7.99 to $35.00 in MP3 or CD format.