Finding Bix: The Life and Afterlife of a Jazz Legend 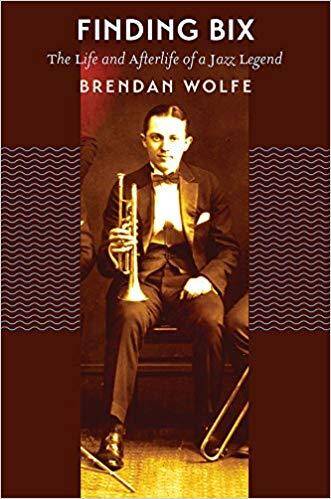 Growing up in Davenport, Iowa, Brendan Wolfe could not help but be familiar with the name Bix Beiderbecke. He was aware of this Davenport native and Jazz Age musician, but admits he didn’t know much about the man’s music. What really got his attention was when he wrote a story about the reissuing of a book about Bix’s life and received a scathing letter from Bix’s nephew pointing out numerous errors in the story. “That, in essence, set me on the trail to figure out what the right facts about Bix are, and why he is someone that people would get angry about.”

The legend of Bix Beiderbecke has become a romantic tale for the ages as the story of his life has been colored by countless retellings by advocates (Bixophiles), scholars, writers, critics, and ordinary jazz fans over the years. A reviewer in 2003 called Bix “the Kurt Cobain of the 1920s; a tortured musical genius who in a short and sadly besotted bohemian life seemed to encapsulate something essential about his time. If he didn’t exist, it would have been necessary to invent him.”

Bix’s drinking buddy, guitarist Eddie Condon described the sound of Bix’s cornet “like a girl saying yes” and went on to say, “Bix was never actually a person, he was a living legend. Without effort, he personified jazz.” Louis Armstrong said, “The first time I heard Bix, I said ‘This man is as serious about his music as I am.’”

In explaining his approach, author Wolfe states, “What’s different about my book is that I didn’t see it as a straight biography. There are not a ton of books about Bix, but the ones that exist have documented his life extensively. For me, the interest was not so much in doing that, but in almost telling a meta story (i.e., one story embedded within another). I was interested in the way people talked and argued about Bix, and the way his story has been told over time. I took these half-dozen books that were written about him and kind of threaded their narratives together, combining them with my own experience and going out and talking to people.”

“My hope for the book is that it brings Bix Beiderbecke to a wider audience and that it’s interesting to people whose inclination might be to ask ‘Bix who?’” What follows, though, is anything but straightforward, as Wolfe discovers Bix Beiderbecke to be at the heart of furious and on-going disputes over addiction, race, sex, the origins of jazz, and the influence of commerce on art, and suggests that Bix has become a model for a lot of these arguments that continue today in our culture.

Bix Beiderbecke was one of the first great legends of jazz. Among the most innovative cornet soloists of the 1920s and the first important white player, he invented the jazz ballad and pointed the way to “cool” jazz. But his recording career lasted just six years; he drank himself to death in 1931—at the age of 28. It was this meteoric rise and fall, combined with the searing originality of his playing and the mystery of his character (Who was Bix? Not even his friends or family seemed to know) that inspired subsequent generations to imitate him, worship him, and write about him. It also provoked Brendan Wolfe’s Finding Bix: The Life and Afterlife of a Jazz Legend, a personal and often surprising attempt to connect music, history, and legend. But Wolfe realized that the closer he got to Bix, the more the legend prevailed.

Trying to explain the real Bix some 86 years after his death at the age of 28 is a tall order, because much of what Wolfe has concluded is based on what others have written. The Beiderbecke story has become a series of claims and counterclaims, contradictions, misinterpretations, and fabrications. In essence, Wolfe has come up with a consensus of the facts of Bix’s life based largely on sources written or compiled by people who have spent a lifetime researching Bix and what they believe to be the facts, plus adding his observations and interpretations. As the sub-title indicates, the book is more about the aftermath of Bix’s life and how his story has been told over the years.

But as Wolfe stated in an interview promoting the book, he is comfortable with the possibility that aspects of Bix’s life and character remain ambiguous, and goes on to say, “The pleasure comes, both as a writer and a reader, not in reaching a conclusion, but in engaging the question.” In the end, he judges his search a failure and writes of his “chronic inability to find Bix.”

In retorting Wolfe, Albert Haim, a retired college professor who established the Bixography Discussion Group, contends “There is no new factual information about Bix in Finding Bix. The book consists of quotations from earlier books (both fact and fiction), articles, films (one a documentary, the others fiction), postings in social networks, private communications, many of them anonymous, and the author’s remarks. Bix did not leave diaries or give interviews (except one, plagiarized). The only primary source about Bix consists of the letters he wrote to his family mostly in 1921-22 and a few in 1931. Thus, the effort expended in Finding Bix (which I take it to mean to find the real Bix) is necessarily a failure, as acknowledged by the author himself.”

This book should not be a reader’s introduction to Bix Beiderbecke. I initially found his writing style engaging and entertaining, but soon struggled to integrate some of the side issues that I felt were not relevant to “Finding Bix.” For those of us accustomed to dealing with things in a fairly sequential manner, it was often difficult to follow the flow of the author’s narrative. For example, Wolfe covers Bix’s early life in the first 34 pages and then doesn’t pick up the story until 91 pages later on page 125. In fact, in chapter 19, he admits “I’ve lost the thread of our narrative a bit.”

When it comes to discussing Bix’s personal life, the author doesn’t paint a very kind portrait of Bix the individual. Was Bix a rube from Iowa who carried his instrument around in a paper bag, a sophisticate, or just a scoundrel at heart? Was he a genius as considered by some, or an obvious chronic drunk who lacked a strong personality and could not negotiate everyday life? What was his real name? (Leon Bix Beiderbecke is the name on his gravestone, or was it “Bismark” as Rich Johnson contends, and “Bix” was just a nickname.)

What was it like growing up in a family of German heritage in post-World War I America. How supportive was the family of his decision to become a jazz musician? Did his parents ever open and play the recordings that he continually sent home? How was his encounter with a young girl that resulted in his arrest for a “lewd & lascivious act with child” kept under wraps for 80 years. And the mystery goes on regarding his sexuality, personal habits, health issues, racial implications, the circumstances of his death, and the many attempts to separate the man from the myth. As Wolfe writes, “Bix is transubstantiating right before us” (p. 78).

I felt that Wolfe’s characterization of some of Bix’s defenders was inappropriate. I got to know Rich Johnson when we both served on the board of the American Federation of Jazz Societies. A musician, the longtime music director of the annual Bix Festival and co-founder of the Catfish Jazz Society, Rich was an internationally-recognized authority and walking encyclopedia when it came to anything and everything about Bix Beiderbecke. In writing his obituary, I described him as “a quiet, modest man with a mind packed not only with music history, but also an inexhaustible supply of jokes and quips.” Rich was a good guy I would hardly call “ornery” as Wolfe, who is currently the managing editor of the website Encyclopedia Virginia, did on page 17.

Just last month in a story publicizing the 46th annual Bix Beiderbecke Memorial Jazz Festival, the Quad Cities Times resurrected a 2013 essay written by Randy Sandke, a board member of the recently-opened Bix Beiderbecke Museum, offering the theory that what really did the legendary musician in was tainted alcohol made available as part of an anti-liquor campaign promoted by the Federal Government. (See: Was Bix Poisoned?)

It would appear that this story has no end. It’s fascinating!