Following the World Championship Old-Time Piano Playing Contest and Festival in Oxford, Mississippi, I made my way to Sedalia, Missouri for the 38th Scott Joplin Ragtime Festival, which began on Wednesday, May 29. I had been to this festival twice before, most recently in 2016. The theme this year was the 120th anniversary of Maple Leaf Rag, and I heard it played no fewer than ten times over the weekend by ten different musicians. Several versions, by Martin Spitznagel and Alex Hassan, were unique and were a welcome change from the way it’s typically played.

The event features, in addition to the music sets, symposia and themed concerts and after-hours jams at a local hotel. I did not attend any of the symposia this time, although I have in the past. I preferred instead to see the musicians do what they do best. I did, however, attend four of the seven concerts, all of which were excellent. These concerts and the symposia are the only parts of the festival for which a fee is charged. The format used this year followed that of 2016, and, I suspect, other years. This year’s program booklet was set up a little differently than 2016’s, and I found it more user-friendly.

Unlike my previous visits, this time there were only two music venues: the Stark pavilion, on East 5th Street in front of the site of John Stark’s publishing house; and Gazebo Park, a 5-minute walk to the north. The Gazebo was set up for a smaller audience and had one upright piano, versus two at Stark. The only downside of this location is that it’s closer to the railroad, where freight train horns blowing at the grade crossings were an occasional distraction. Trains have always been as much a part of Sedalia as ragtime. Due to flooding on the Missouri River, Amtrak had suspended service on this line but somehow the freights kept moving. Maple Leaf Park, which had been used before, was not used this year. It’s farther still from the Stark tent, backs up to the tracks, and lacks a roof or pavilion. The festival office, symposia, and paid concerts were situated at the Liberty Center, a nicely restored theater half a block from the Stark tent. 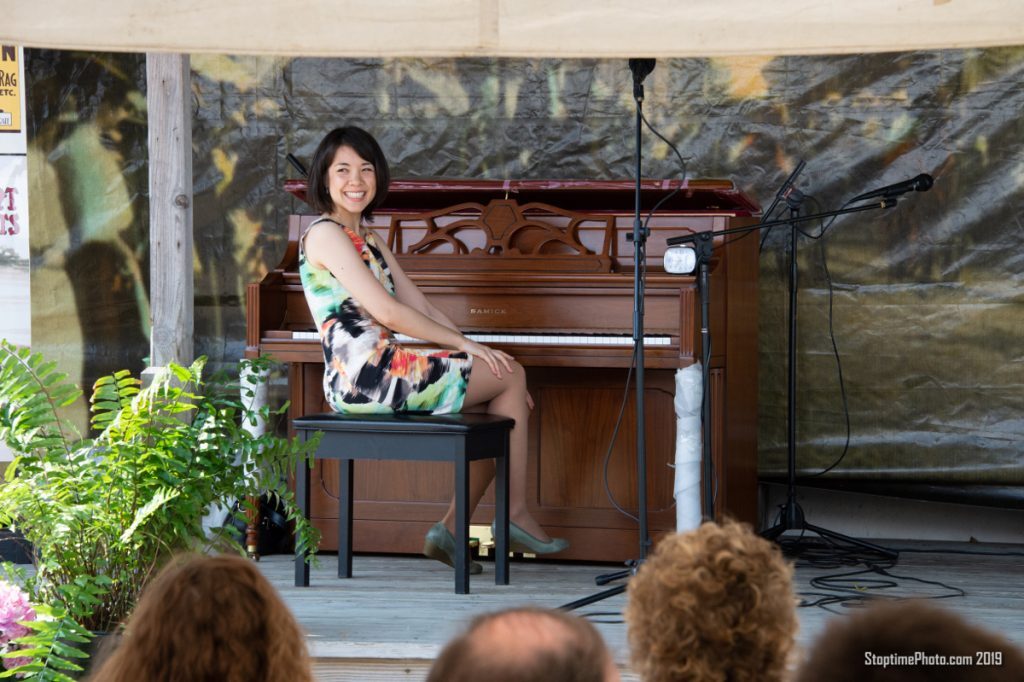 No fewer than 26 performers were engaged this year. I managed to see them all except David Reffkin. Most are regulars at the festival, but there were a few whom I had either not seen or not heard of. These included: Taslimah Bey from Detroit; 18-year-old Oliver Moore from Chico, CA; and Sean Sharp, also from California, who is on the west coast festival circuit. Also new to me was The Rhythmia, an acoustic string duo from Kansas City. Both Taslimah and Oliver played from charts, but nobody else did. I do not recall seeing any performers using printed (or electronic) scores before at this festival.

The music sets ran a half hour simultaneously at the two tents, with no break in between, so if you wanted to change venues you had to miss a few minutes of one or two sets to make the walk. In my July, 2016 column, I opined that a 5- or 10-minute break between sets would have eliminated this problem. I repeat that comment here. Perhaps there’s a reason it’s done this way, but it was not apparent to me. I suspect some people just parked themselves at one location for the day. The Stark tent, being the main stage, had seats for about 250, verses 40 at the Gazebo, and there were food vendors set up close by so one could stay nourished (after a fashion—the trucks’ offerings would not qualify as particularly healthful) without missing a note. 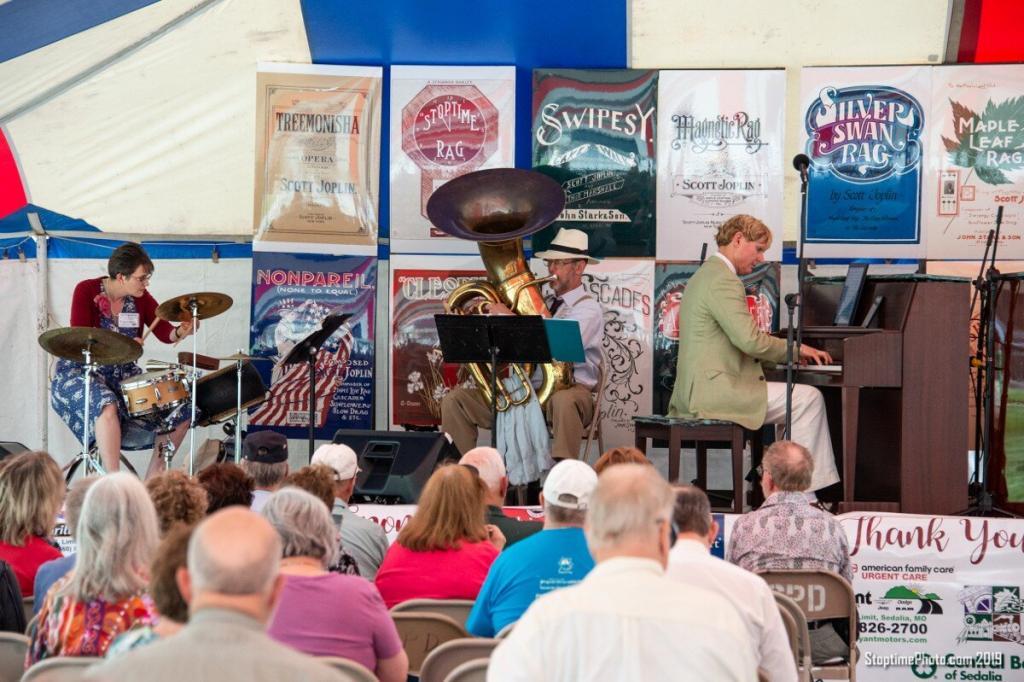 The festival had so many highlights, some of which I undoubtedly missed, that it would be impossible to describe them all. Here are some I did witness, not necessarily in order of importance:

1) The final set at the Stark tent on Saturday afternoon brings most of the pianists onto the stage, and is usually, if not always, emceed by Jeff Barnhart, and features the tune “Shake That Thing,” to which Jeff poetically introduces each musician.

2) Immediately prior to this, Bryan Wright and Martin Spitznagel did a set in which they both cross-dressed. Their skit was capped off by Frederick Hodges playing and singing “Masculine Women and Feminine Men,” a little-known 1925 tune by Edgar Leslie and James V. Monaco.

3) At the closing concert Saturday evening, Dalton Ridenhour played Fred Hoeptner’s new rag “Breezy Day at Sutter Creek.” Fred was introduced and happened to be two seats away from me. So at intermission I cornered him to get information for this piece—until he mentioned that he was the subject of an article in these pages about six months ago. I confess I did not remember, although I surely read it. I found it in the November 2018 issue, written by Larry Melton. Since all back issues are now available online, I don’t need to repeat anything from Larry’s piece, and I refer you to it. Our paths have undoubtedly crossed before, but we had never met.

4) The Thursday afternoon concert featured new pieces by contemporary composers such as Vincent Johnson, Marty Mincer, John Reed-Torres, and Martin Spitznagel, the latter two playing their own works. This added a welcome variety to the usual ragtime fare.

5) Thursday evening’s concert was a tribute to the late Trebor Tichenor by his daughter Virginia and her husband, pianist/bassist/tubist Marty Eggers that included some of Trebor’s compositions. They were joined near the end by Fredrick Hodges; the three of them make up the Crown Syncopators who perform in the Bay Area, where they all live. If I ever saw Trebor perform, it most likely would have been at my first time in Sedalia in 2007, as he died in 2014.

Next year’s festival theme will be women in ragtime, to honor the 100th anniversary of women’s suffrage. I suspect there will also be more female performers than usual, but the lineup has not been announced. As I wrote last month about the World Championship Old-Time Piano Playing Contest, were it not for the distance, I would attend the Joplin festival more often.