Discerning influences – why musicians sing or play or write the way they do – can be as straightforward as recognizing a stolen/borrowed lick or as ambiguous as “there’s something in the sound…” Tracing influences seems a way to seek resolution in what would otherwise be an incomplete story; to construct the kind of head/heart listening experience we crave. On a more pedestrian level, it’s a way to distinguish yourself among music lovers, a cohort that respects immersion, critical listening and the ability to cross-reference data. For a critic, it may be a way to a job. Among working jazz musicians, it’s more complex, entailing a deeper level of technical analysis, a comparison with one’s own stylistic approach and a consideration of any aspect that might be assimilated into one’s own playing. As a critic, musician and fan, I have some of all three of these in myself.

While recently reviewing a massive release of Nat Cole’s music, I revisited the playing of pianist Art Tatum-a clear influence on Cole. Listening to Tatum revived the feelings of ambivalence I’ve always had about Tatum’s playing. I believe him to be the most virtuosic musician in jazz history and among its most creative. I also find the constant assertion of his virtuosity a mixed aesthetic blessing. I began to wonder if this perception might help to explain why the influence of this keyboard giant seems not to be as tightly woven into the fabric of jazz as it might be. While I’ve found that publicly announcing this notion is likely to unleash the dogs of war, understand that questioning the influence of this singular musician is not to question his place in the jazz firmament. That would be a fool’s errand.

Any examination of the musical details at play needs to be placed in the gestalt of Tatum’s extreme virtuosity, which galvanizes the listening energy field. There’s a visceral attraction in it, as well as an implication of destruction that rivets our attention. Fats Waller famously said about Tatum: “I only play the piano, but tonight God is in the house.” That may well be, but as the joke says, about the figure in heaven holding a trumpet: “That’s God, he only thinks he’s Miles.” Or in this case-Tatum-and being god can be a double-edged sword.

The historical chronology would have us naturally link Tatum to the innovations of Bop by assuming the same kind of progression we do with trumpet players: “Armstrong (20’s) begat Eldridge (30’s) who begat Gillespie (40’s).” After all, the stellar Tatum was already widely known and respected in the early 1930’s and the virtuoso “Modern jazz” creators-Parker, Gillespie, Monk, Powell and others-operated in the early 1940’s. But let’s look more closely at the elements at play.

First of all, let’s look at one of the most noticeably virtuosic elements of Tatum’s playing: runs, which he made with both hands and at lightning speed. These were based on short phrases or motifs, repeated up and down the keyboard; like arpeggios, which repeat a chord and which he also used in profusion. These aren’t varied from the beginning of the run to the end. Although Bird and all the beboppers repeated phrases, or licks, the creation of their licks relied on internal variation, sometimes diatonic, sometimes chromatic and they were not strung end to end. Like Tatum, players will occasionally play runs from the top of the horn to the bottom consisting of a short phrase repeated, like a pentatonic motif. But what sounds brilliant played by Tatum at dizzying speed, in combination with contrary motion or other left hand movement sounds boring and clichéd on a horn and it wasn’t adopted in the bop horn nomenclature.

What about the bop pianists? Given that these runs, as well as the quick glissando flourishes and arpeggios that Tatum utilized so brilliantly were pianistic, they might have been more transferable to pianists like Thelonius Monk and Bud Powell than to horn players like Bird and Diz. But to what degree did they show up in their playing? Some, but not in great profusion, as they did in Tatum’s playing; only to a degree that we have in the playing of Earl Hines and Teddy Wilson. Are there “modern” pianists who specify their debt to Tatum? Yes, but the degree to which these pianists and others have been influenced by Tatum is open to interpretation. His influence on Oscar Peterson is the easiest to see. Erroll Garner, perhaps, but Garner moved that influence into his own unique realm. We hear Tatum in other pianists, but they draw from a large well of players, and Tatum’s influence needs to be evaluated in that wider context. It’s far easier, for example, to see the direct influence of Bud Powell on a number of piano players. 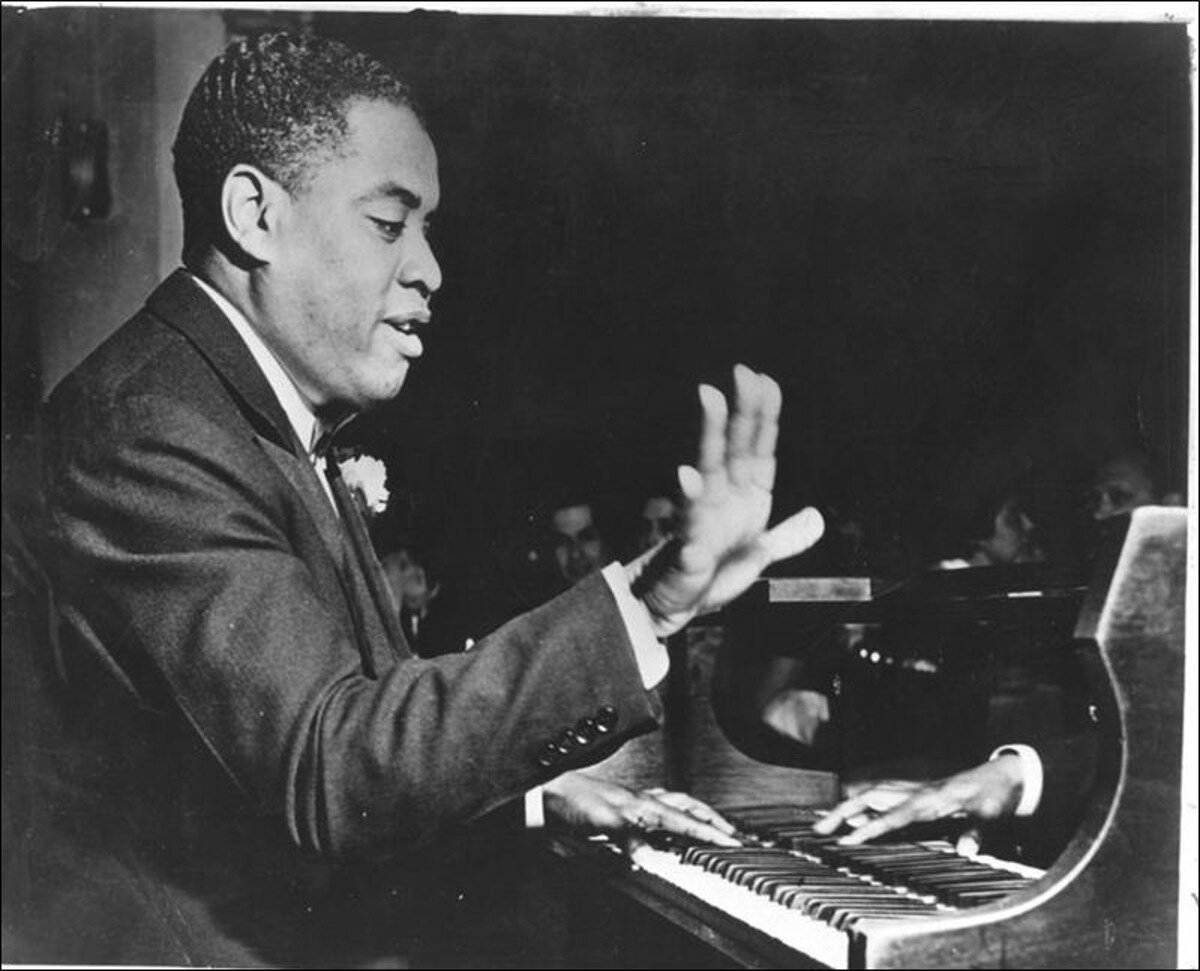 As far as lines (not bass lines) are concerned, Tatum’s were usually variations of the melody. Ornamentations and runs were interjected so often that he seldom allowed lines to play out, at it were (although this happens a little more often at the end of his life). Bud Powell, the model for almost every bop pianist, approached constructing lines the way bop horn players did: perhaps alluding occasionally to the melody, but almost always creating completely new lines above the harmony. Charlie Parker heard Tatum while working as a dishwasher in a Manhattan restaurant and Parker is quoted as saying: “I wish I could play like Tatum’s right hand!” But the fact is, if Bird had, it would have sounded nothing like bop. Maybe Bird knew it then. Maybe he discovered it as he proceeded. Monk, on the other hand, did often play stride and when he did, his right hand usually played variations of the tune’s original melody-the common stride right-hand approach. Stride was a long established strain in jazz and Tatum created some new virtuosic wrinkles in that venerable piano art, using his left hand alone and in counterpoint with his right, but if such innovations show up in Monk’s playing, I haven’t heard it. 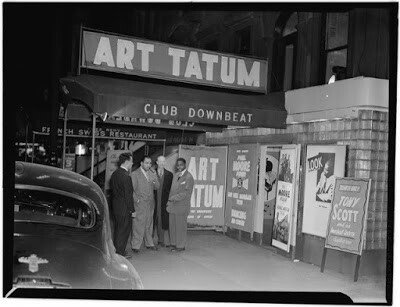 The density of some of his chords found a receptive audience in bop pianists and especially with forward-thinking arrangers. Tatum used a simpler, more transparent harmonic approach in intros and at the end of songs, sounding much like Fats Waller, Earl Hines and Teddy Wilson. In the body of songs, however, there’s no question that he stretched diatonic harmony to its extreme. Tatum used chord extensions-9th’s, 11th’s 13th’s, raised and lowered, in modulations, substitutions, dense chords and clusters. He applied them at dizzying speed within the larger structures he created, in his dense sonic environment of constantly moving lines and embellishments. Although he seldom used these extensions in constructing lines, he often used them to construct the small motifs he used for runs. The beboppers were specifically interested in making these extensions a part of their musical language and Tatum modeled how to use these, but imbedding these harmonic innovations in such a dense pianistic environment probably made them more difficult to adopt in other circumstances. And, from what I can find out, he never talked to other musicians about the technical aspects of what he did, as Gillespie, Mary Lou Williams and Monk did.

Tatum is also noted as a pioneer of “outside” bi-tonal playing in jazz (apart from the early large ensemble writing of Ellington), but does this concept get assimilated into the creation of bop? We do have Gil Evans writing arrangements with bitonality and Lennie Tristano touching on it in the late 40’s, but this was a relatively small subset of the greater bop and then the hard bop movement.

Common wisdom around Tatum was that he was too “difficult” for the general public, which was the reason he was consigned to playing second-rate gigs. Musicians, it was said, were the only people who could “get” him. That’s probably true, as musicians tend to laud Tatum to the skies; less so, though, the horn players who tried to play with him. Of course, the issue of a potential “collision” between styles is one that might arise when any “two-fisted,” stride or barrelhouse piano player moves out of the solo realm into a more collaborative musical situation. Formidable stride players Fats Waller, James P. Johnson and Willie the Lion Smith played in various size jazz ensembles. While the solos they played in this context were often highly ornamented and virtuosic, when they played as part of an ensemble they moderated their styles to fit the particular situation. Not so, Tatum.

So, to sum up: some of Tatum’s techniques found their way into the sound beboppers were after. The boppers had to abstract Tatum’s inventions concerning extensions and harmonic byways from his panoply of effects and renegotiate them so they would work in a less pianistic, more horn-centric environment. Most importantly, I think, what bop got from Tatum was the idea of harmonic flexibility and stretching harmony; that you could build music on a broader structure using chord extensions and that you could drift away and come back to tonal centers. These became basic, pervasive tenets of jazz playing and writing. Ultimately, the Boppers built improvisational approaches and a system of chord progressions that codified the use of extensions and substitutions (There was still work to be done with these techniques in the late 1950’s by Coltrane and others).

But to some degree, influence spreads as a result of whom musicians decide they want to emulate and many things influence this choice. Being in awe of someone’s playing will draw you to the music, but there must be space for more and wider emotional communication if the connection is to be stronger and this, I believe, was more elusive with Tatum. I talked about how his virtuosity made assimilating his advances more difficult, but other aspects were his unwillingness to modulate his playing in different contexts, his seeming disinterest in talking to other musicians about his music and the fact that there is almost no natural sense of breath-no space in his music that allows for a full range of moods. No matter the tempo of the tune, it always seems to be passing at 300 beats per minute. The ride is always vertiginous. All songs, no matter the tempo or lyrical intent, get a virtuosic treatment.

Tatum stood alone and to me, he stood in a place of great creative bounty but with slightly truncated emotional boundaries. His insistent virtuosity made him a god in the eyes of musicians, but making someone into a god is both a way to create psychic distance and to acknowledge its existence. So, while Tatum’s influence is unassailable, I think that his drive to constantly assert his virtuosity, somewhat ironically, kept his influence from reverberating more widely through jazz history.