Everyone knows that people the world over associate Roswell, New Mexico with the UFO phenomenon and purported crash of a “flying saucer” back in 1947. But a growing number of musicians and fans worldwide are discovering the exciting, world-class event that takes place in Roswell during the third week each October. It is the Roswell Jazz Festival, a cultural event dedicated to celebrating America’s art form and educating youth. This year’s festival, scheduled for October 16-20, marks the fourteenth annual event.

But, how did an unlikely New Mexico city like Roswell become a Mecca for some of America’s top jazz musicians and fans? A New Mexico jazz festival spawned by a hurricane? The story is unique.

In early September 2005, a direct connection was created between Roswell and New Orleans, LA, the city known as the ‘birthplace of jazz,’ via the wrath of Hurricane Katrina and the friendship of two men with a vision. Retired Roswell educator Frank Schlatter and Pulitzer Prize nominated symphonic composer and jazz pianist Dr. Roger Dickerson of New Orleans had kept in touch since serving together in he 33rd U.S. Army Band in Heidelberg, Germany. When Katrina hit New Orleans, Dickerson was forced to evacuate his home when floodwater reached a level of five feet inside, covered his grand piano and destroyed many of his precious musical manuscripts.

Upon reaching safety in San Antonio days later, Dickerson finally had access to a telephone bank allowing him an opportunity to check in with his many friends across the country. A phone call to Schlatter in Roswell would prove to be a fortuitous one for Roswell. Schlatter naturally invited Dickerson to come to Roswell and take refuge in his home while weathering the storm and the anticipated lengthy New Orleans cleanup. Dickerson accepted the invitation.

No one realized back then what lay ahead. Dickerson’s visit would sow the seeds for the birth of a new event in the city in the form of a world-class jazz festival that, with dedication and hard work, would gradually develop into a cultural treasure, become respected nation wide, and continue on for years.I had been aware of Dr. Dickerson since the early 80s by way of a mutual friend who was studying piano with him in New Orleans. I was thrilled when I heard Dr. Dickerson was in town, I knew that this was going to be a very special blessing for Roswell.

I was thrilled again when I learned I was being invited to perform some two-piano duets with him at Pecos Flavors Winery. These duets, along with several other successful events, drew enthusiastic, supportive audiences.The charisma and spiritual energy that Dickerson brought to Roswell became contagious. In October 2006, through the tireless efforts of an all-volunteer staff headed by Schlatter, who established the festival as a 501 c(3) non-profit organization, combined with extremely generous financial support from local businesses and patrons, the first Roswell Jazz Festival became a reality. 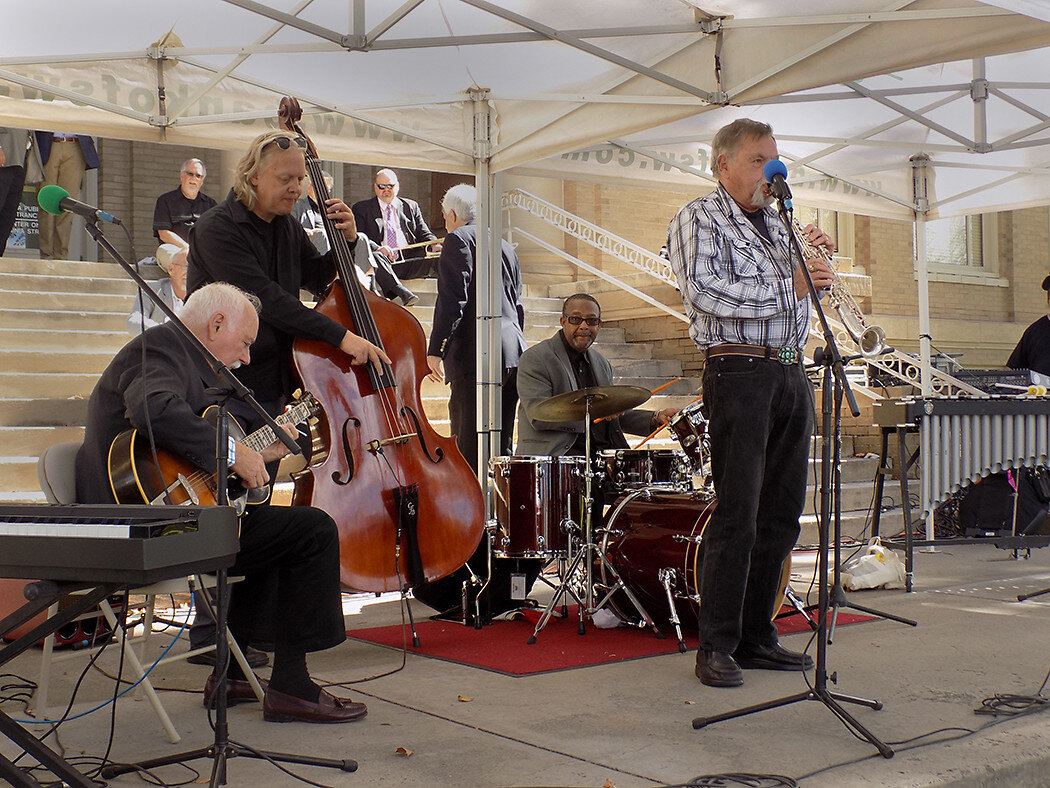 Many of these greats have become ‘RJF family regulars’ over the years and the number of performers at each festival has gradually also increased each year. Dr. Dickerson re-established his residency in New Orleans but has returned to Roswell each of the last thirteen years to perform in the festival. “The upcoming fourteenth annual Roswell Jazz Festival, this October 16-20, may very well be the most exciting one to date,” said trumpeter Charles Gordon, RJF president. “It will feature close to 30 world-class musicians, and will include ticketed performances and free events, educational classes for students and adults, a blues show, a jam session, a Sunday morning jazz worship service, and a special jazz piano showcase.”

Due to the engagement of a new venue feature this year, the festival will be able to expand the ‘RJF School of Jazz’ educational component. The RJF strongly believes that educating our youth about the American art form of jazz music, including teaching its colorful history and instruction on performing is a high priority. The festival board of directors has established an educational scholarship fund that will allow fortunate local talented musicians to receive an all-expense paid trip to Denton, TX to attend the prestigious North Texas State University summer jazz camp.

Michael Francis is a jazz pianist and the Artistic Director of the Roswell Jazz Festival.