Why Jazz? A Concise Guide By Kevin Whitehead 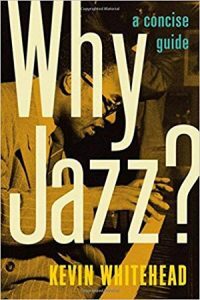 Here’s a book that should be required reading for Jazz 101 courses worldwide. While aimed primarily at novice jazz fans, more experienced aficionados will also enjoy the author’s easy-to-read prose style as he succinctly outlines the basics of the genre, from its New Orleans origins through the Swing Era, bebop, avant-garde and the postmodern period covering the last 30 years.

The writer, Kevin Whitehead, is a graduate of State University of New York at Oswego and now reviews jazz for National Public Radio’s Fresh Air. Though his personal tastes lean toward the music’s experimental edges, he does a yeoman job of summarizing the contributions of traditional artists such as Louis Armstrong, Bix Beiderbecke, Jelly Roll Morton, and Duke Ellington.

Along the way, Whitehead examines often-overlooked recordings and provides pithy definitions of terms such as syncopation, the circle of fifths, and the flatted fifth.

As suggested by its title, one of the most interesting things about Why Jazz? is that it’s formatted as a series of questions which the author answers. For instance, “Are jazz solos really improvised?” and “Why do jazz people go on so about Louis Armstrong?”

The short answer to the latter is “He influenced everybody. Of all the 1920s jazz soloists, he had the surest grasp of the subtleties and refinements of swing.”

Comparing Beiderbecke to Armstrong, Whitehead points out that Bix’s “tone set him apart, and he’d linger over odd notes that Armstrong might hit only in passing. His lines were more wistful and ethereal…but in truth his influence, profound as it is, has been nowhere near as extensive.”

The answer to “Who was the first great jazz saxophonist?” is, of course, Sidney Bechet, but Whitehead really did his homework. First he identifies the obscure Six Brown Brothers, a saxophone sextet from Lindsay, Ontario which recorded “Down Home Rag” in 1915.

Why Jazz? also describes the Dixieland revival of the 1940s, deals briefly with the civil rights movement’s effect on the music and explains Wynton Marsalis’ role on the current scene. In his introduction, Whitehead answers the oft-heard query, “Isn’t jazz old-fashioned?” “No,” he writes, “because music with substantial improvised content constantly updates itself.” That’s an encouraging observation.