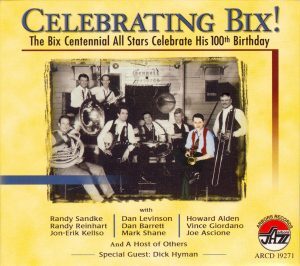 2003 was the centennial of cornetist Bix Beiderbecke’s birth. Celebrating Bix! is a very well-conceived tribute to Beiderbecke that Arbors released that year.

Throughout this project, the group (with arrangements by Peter Ecklund and Levinson) succeeds at doing a balancing act between recreated passages and new improvising. While aspects of the original recordings are brought back, the soloists often get the chance to come up with their own statements within the style.

Using three cornetists on most selections is an inspiration for they play harmonized renditions of some of Beiderbecke’s famous solos and ensemble playing on such songs as “At The Jazz Band Ball,” “Riverboat Shuffle,” “Davenport Blues,” “Jazz Me Blues,” “Clarinet Marmalade,” “Way Down Yonder In New Orleans,” “San,” “Deep Down South,” and of course “Singin’ The Blues.”

In addition, all of the horn players (other than Martinez) get solo space, including each of the cornetists. Barbara Rosene does very well singing in the period style on “Proud Of A Baby Like You,” “I’m Coming Virginia,” and “Singing The Blues” while the Manhattan Rhythm Kings liven up “Borneo” and “San.”

I’m sure that Bix would have loved to sit in with this group.

Celebrating Bix! (Arbors 19271, 19 selections, TT =76:54) wwwarborsrecords.com (CD Sold Out, a Download is available from Bandcamp, Amazon or any other service.)