Clive Wilson: Time of my Life 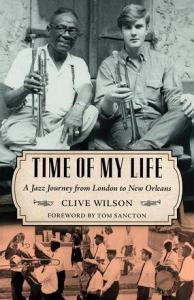 “Wow, wow, wow! He knew everybody!” That was my impression through the first half of Clive Wilson’s new memoir about chasing his love of traditional jazz to New Orleans and eventually settling down there. From his days as a public school boy in England listening to Bunk Johnson records, through pages and pages of connections to everyone in British trad and then the old guard of New Orleans, it seemed a most improbable story. Told not boastfully but certainly with a will not to leave anyone out.

It was only when he hitch hikes north to Chicago, catching a  ride with the Salty Dogs of Indiana, and stays briefly in the home of Delmark records founder Bob Koester on his way to Connecticut to join Sammy Rimington in Big Bill Bissonnette’s Easy Riders that it occurs to me that not much has changed!

The traditional jazz world is small and tight knit, friendly then as it is now. Today’s young (and old) musicians are making hops around the world, connected in a similar network of truly amazing people. Fans, collectors, and musicians still find each other. The folks who stay in one place united by those who won’t stay planted. I was frequently amused to see the names of people I’ve communicated with mentioned, not a few of them subscribers.

New Orleans remains a mecca to them all.  That trumpet player you pass on Royal St. could be from Budapest, Wisconsin, or anywhere in between. Scores of passers-through sat in with Jim Cullum, and countless still do with Vince Giordano. Some 23 year old on the scene now might write a memoir with a similarly long string of names come 2073. And then as today only the deeply initiated would know very many of them.

My perch at TST provides me a uniquely cross generational vantage point. It has been an education in the revival history most people overlook on their way back to the source. The names in this memoir will be most easily accessible to Wilson’s peers. People familiar with the movers and shakers behind institutions like the GHB and Jazz Crusade labels, early Preservation Hall, and the musicians who played and recorded through those years. The joy of recognition will be a selling point for many readers. His recounting of a friendship with Barbara Reid and her part in the early revival and Pres Hall is particularly enlightening.

For those too young to recognize all these names this short book won’t be as fun, but it is an easy way in. It’s a glimpse at the decades that assured a distinctly New Orleans jazz would be carried down to us. It’s also a huge pile of leads about artists and bands worth exploring further in your search for the real New Orleans sound.

With only 175 pages of narrative it’s a pleasant and fulfilling read. The story of Wilson’s early life in jazz, focused primarily on his impressions of people around him. He arrives in New Orleans in 1964, returning home for awhile he returns and never leaves. The 40 years since 1979 are given barely a page so this is really a narrative of all the old timers we worked with in those 15 years.

They were an amazing assortment of welcoming men, and a few women, from proud New Orleans musical families. In the first years of desegregation Clive Wilson was invited everywhere, from back yard parties to brass band funerals. Perhaps because his respect and awe of the music these men created was so evident, and his desire to learn to play correctly so sincere.

The story is told quickly within the main narrative line. What could be a string of names connected by vignettes is broken up by sidebars focused on an individual musician. There are 20 or more of these throughout the book, some a paragraph, many several pages. Not a summary of the musician’s life, instead a story about them too good to leave out. They are a highlight. Though not his intent, this short memoir of personal remembrances will prove a useful source of anecdotes for future researchers. Fortunately there is an index for quick reference later.

Through “jazz pilgrims” like Wilson, Lars Edegran, Orange Kellin, and others who flocked to the city in their youth, and stayed, as well as locals like Tommy Sancton and the countless members of marching clubs who kept the flame alive, a direct word of mouth connection can still be made to the deep traditions of New Orleans. Playing with a guy who played with members of the top bands of the teens and twenties is still possible, at least for now. Hearing what they shared with him about the music is as easy as opening this book.