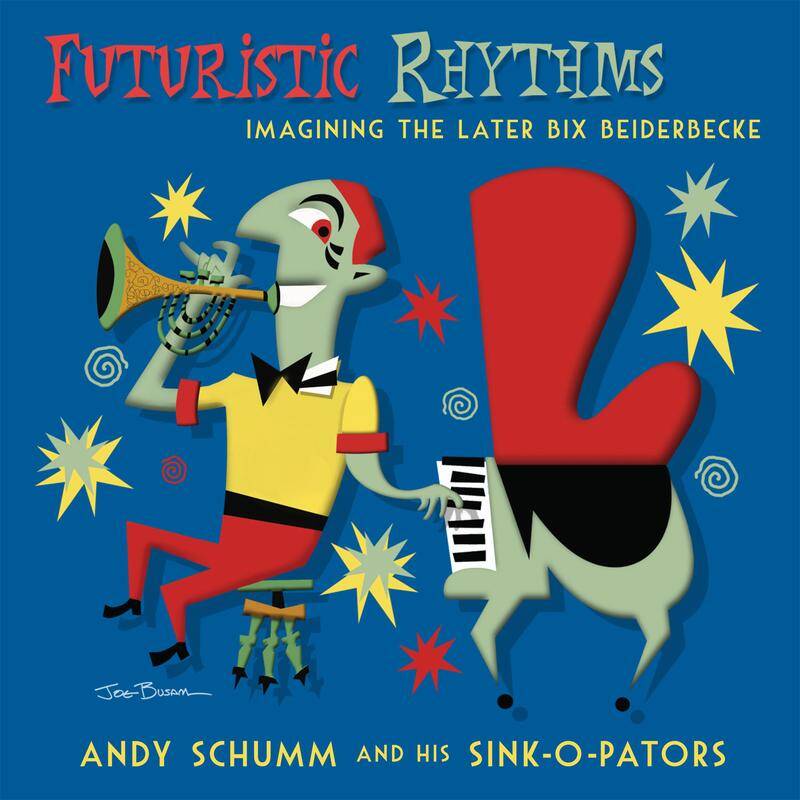 The question posed by this album is “What would the great cornetist Bix Beiderbecke have sounded like had he stopped ruining his health and abilities with drink and lived on, avoiding his actual death at the dawning of the 1930s?” During the mid-to-late 1920s he had appeared as soloist on 95 recorded selections, achieving a reknowned reputation among musicians and fans to this day. Although their styles differed greatly, Louis Armstrong was quoted as saying that he regarded Beiderbecke as his only equal.

Cornetist Andy Schumm and reedman Ewan Bleach (heard here on clarinet and tenor sax) rank high among a select group of youngish pre-bop jazz musicians around today. Having worked and recorded with the Fat Babies and his own Chicago Cellar Boys in the Windy City for the last few years as well as one-off recording sessions, Schumm is known as an accomplished arranger and multi-instrumentalist, playing everything except trombone very well (and that’s coming along).

However, when he first emerged on the jazz scene, Andy Schumm established his reputation as a cornetist with an uncanny ability to emulate—in tone, technique, and ideas—Bix Beiderbecke. As such, he is probably the only cornetist around today who could have realized the concept of this album so convincingly. Since the actual Bix wasn’t around to play the selections chosen, Schumm captures Bix’s spirit without sounding like a mere copycat. In so doing, his playing is refreshingly original and invigorating throughout.

Giving him great support as the only other hornman here is Ewan Bleach. He hasn’t been heard much in the US, but he should be. Although he’s native to England he’s spent time in New Orleans, most often working with the group Tuba Skinny. He appeared, playing alto sax very impressively on that band’s album Some Kind a Shake. All his solos and accompaniments here are fluid, original, and adept within the early 1930s small band swing style and, like Schumm, deliciously hot.

All the efforts of the horn players would have gone nowhere with a weak or placid rhythm section. Fortunately this didn’t happen. During this album’s first ten selections of 1930s material the four-piece rhythm section swings hard with idiomatic accuracy while performing as a supportive unit, not just as a group of individuals playing at the same time.

Many of the tunes, such as “Why Can’t You Believe,” “Out Of A Clear Blue Sky,” and “The Things That Were Made For Love” were originally good pop songs of the period that have been generally forgotten today. Others like “I Never Knew” and “You’re Lucky To Me” are still heard once in a while but haven’t worn out their welcome. “Moten Swing” with considerable originality doesn’t sound much like the Count Basie Band would have done it. That’s a good thing. Likewise the fact that there are no vocals, just good instrumental music. While tempos vary, almost everything has a swinging pulse, replete with original but simple arrangements. The only actual slow ballad is “The Nearness Of You,” which is a pleasant feature for Bleach’s tenor sax.

Then comes the big surprise: for the last two selections “San” and “Weary Blues” Schumm drops the Beiderbecke persona for his own style, Bleach plays clarinet only, Oliver becomes a hot, two handed stomper (it should be pointed out that he has a solo album on Rivermont Records of this sort of wonderful stuff), and bassist Tom Wheatley slaps and pops exclusively. Along with Martin Wheatley and the slightly more aggressive drummer Ball, the whole band changes its personality into a joyful and exciting traditional jazz outfit, just as pleasurable to the listener as the former swing group. It also proves the flexibility of the musicians involved, with a much broader spectrum of interest and expertise than players of the past.

Available for $15.95 mail order only from Rivermont Records via their website.