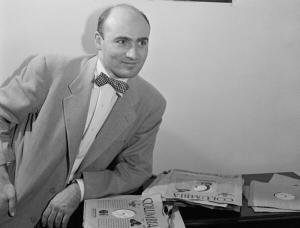 GEORGE AVAKIAN, 98, died on Nov. 22 in New York City. One tribute on his passing stated, “The story of George Avakian is the story of jazz being awakened to itself and finding its proper place in the world.” He was a record producer, artist manager, writer, educator and a major force in the expansion and development of the U.S. recording industry.

Born in Russia, he developed a love for jazz in his early teens listening to the Big Band remotes from around the country on radio at night. “It reminded me of the lively dance music and other folk music my parents had brought to America from Armenia.”

As a 20-year-old student at Yale University in the late 1930s, he wrote to several record companies complaining that much of the great jazz was unavailable in record stores. He considered it a tragedy that Louis Armstrong’s two recorded groups from the 1920s, the Hot Five and the Hot Seven, could only be heard on scratchy-sounding discs.

Decca Records was so impressed by his letter that it hired him to organize re-issues of valuable material. The first recording he produced was Chicago Jazz featuring Eddie Condon and the Chicago Gang (1940). The old Armstrong performances became widely known, which helped revive Armstrong’s career. Years later, Avakian persuaded Armstrong to record Kurt Weill’s “Mack the Knife,” which became a major hit.

When the record companies adopted the long-playing LP discs, he saw how this innovation could benefit jazz. Great soloists were able for the first time to perform according to their talent rather than the demands of technology. Avakian supervised the release of Benny Goodman Live at Carnegie Hall 1938. When the Duke Ellington band hit a low period in the 1950s, Avakian supervised its appearance at the Newport Jazz Festival, which contributed to reviving the band’s fortunes.

Avakian also produced Louis Armstrong Plays W.C. Handy, some of Dave Brubeck’s most popular albums, and a great Sonny Rollins record, The Bridge. Under his direction, Columbia Record was the first major record company to record live performances of jazz and popular music. In 1954, he signed two of Columbia’s jazz superstars: Miles Davis and Johnny Mathis. In 1962, he planned and accompanied Benny Goodman’s landmark tour of Russia.

He had a feel for more than jazz. He introduced Édith Piaf to American record buyers and produced The Button-Down Mind of Bob Newhart, which made Newhart’s reputation as a comedian. Before the record, Newhart was an accountant, and comedy was just a sideline. Avakian wrote for several jazz publications and taught one of the first academic jazz history courses at New York University (1948).