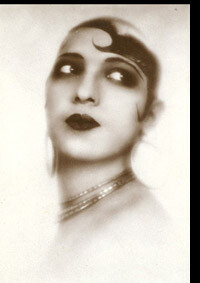 Josephine Baker (June 3, 1906 – April 12, 1975) was born in St. Louis, Missouri. When she was thirteen she dropped out of school left home and got married but the marriage only lasted a few months before it ended.

Josephine started performing as a street musician in St. Louis and soon graduated to performing on the T.O.B.A. vaudeville circuit. In 1922 she landed a small part as a comedy chorus girl in the touring company of Sissle and Blake’s musical revue “Shuffle Along”.

Josephine went over well in her small role in the revue and came to the attention of Sissle and Blake. They wrote a special part for her in their 1924 production of “Chocolate Dandies”. During this time period Josephine became the steady girl friend of Eubie Blake.

French producers came to New York looking to cast an all-black musical revue in Paris. They saw Josephine performing at the Plantation club and offered her a part in their production La Revue Negré. In 1925 she went to Paris to appear in in the show. 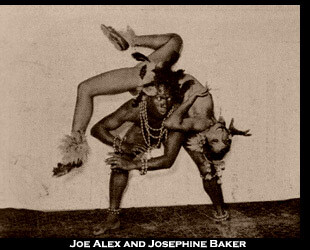 The La Revue Negré began a tour of Europe but Josephine left the show in Berlin and returned to France, where she was offered a starring role at the famous Folies Bergère. In the show Josephine performed a dance that combined both comedy and eroticism were she wore only a skirt fashioned to look like bananas and comically crossed her eyes.

The show was a big hit and Josephine became a major star in France based on this her performances at the Folies Bergère. In 1926 Josephine made her first recordings in Paris and opened her own night club called Chez Josephine at 39 rue Fontaine in the 9th Arondissement in Paris. 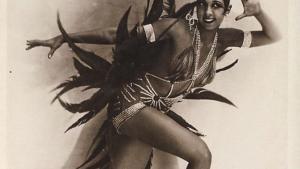 Josephine’s star continued to rise in the 1930s and she became one of the biggest stars in France. In 1936 she returned to America to to star in Ziegfeld’s Follies but the show was a flop and Baker broke her contract and returned to Paris disgusted with the racism that she was subjected to while in New York.

During World War II Josephine stayed in France and joined the French Air Force working with the Red Cross and performing for French and Belgian troops. During the Nazi occupation of France Josephine heroically stayed in Paris and was a member of the French Resistance.

Josephine continued to perform in the 1950s and 1960s until she suffered a heart attack in 1964. After her heart attack Josephine slowed down and only performed a more few times before her death in 1975