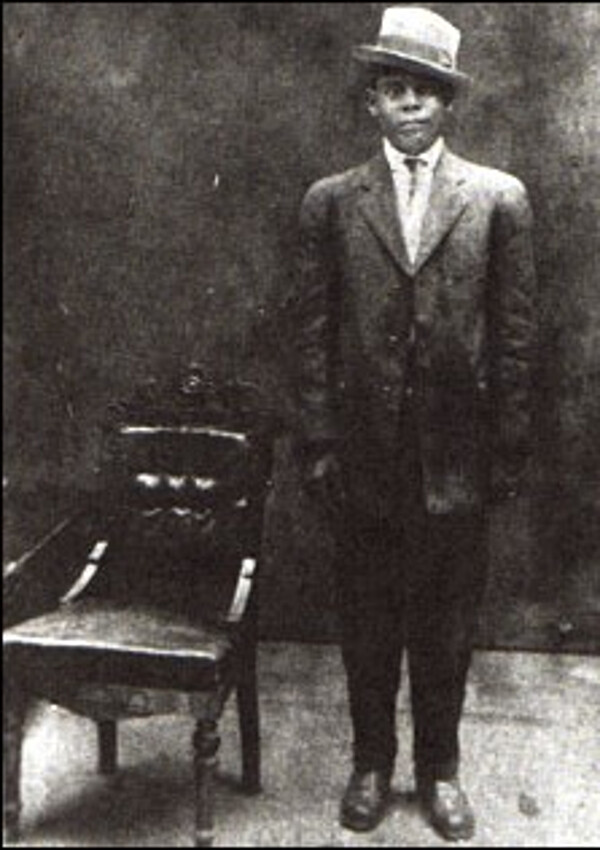 When Henry “Kid” Rena‘s (pronounced ruh-NAY, 8-30-1898 to 4-25-1949) name comes up, albeit infrequently, in the annals of New Orleans jazz, he’s usually identified as a ‘must’ve been’ or an ‘also-ran’. “Must’ve been’ in the sense that New Orleans legend records that he was able to play up around high “c” for eight minutes or more without coming down- if so, nothing of this ability appears in audible documents of Rena. And an ‘also-ran’ in that New Orleans legend is rife with anecdotes about Kid Rena backing down in cutting contests with other legendary Jazz trumpet voices, namely Buddy Petit and Chris Kelly. One such story has Rena bowing out to Kelly in an impromptu bout held in a pouring rainstorm.

But unlike Petit or Kelly, Rena’s playing survives on record, and Rena was an important figurehead in New Orleans Jazz in the crucial decade of the 1930s, when Jazz in New Orleans nearly died out completely.

Henry “Kid” Rena was born on August 30, 1898 and is said to have taken lessons from Manuel Perez. When Louis Armstrong took a job on the S.S. Capitol, Rena replaced him in Kid Ory’s band. Rena was with Ory until the latter departed for Los Angeles in 1922, then Kid Rena began his own “dixieland band” later that year. Shortly the Rena band won a loving cup at the Jerusalem Temple from Celestin’s Tuxedo Jazz Band. Rena’s Dixieland Band played every hall in New Orleans in the coming years and even made the trip to Chicago three or four times in 1923-4. At some point he took over leadership of the Eureka Brass Band, and departed from them when he founded his own Brass Band circa 1932.

Times got hard, and by the mid-thirties Rena was having lip trouble, but somehow he kept it together in a discouraging 1930s New Orleans atmosphere where gigs were drying up, the jukebox was taking over and nobody wanted to hear that ‘old’ music anymore. He was engaged with a small group at the Gypsy Tea Room in 1936, and played regularly at a Canal Street jitney called the Brown Derby for the remainder of his active career.

In the summer of 1940, Heywood Hale Broun, Jr., motivated by the recent publication of the book Jazzmen, set out to New Orleans to record a traditional jazz band and decided to build the band around Kid Rena. This was the first “revivalist” recording session to take place in the Crescent City. After some abortive attempts at recording rehearsals by this band, the final session of eight tunes was achieved at radio station WWL in the Hotel Roosevelt on August 21. The issued records were avidly sought by collectors after the Second World War. Like most 78s directly marketed to jazz collectors, the Rena items are not considered so highly valuable today. Yet the recordings themselves are well worth knowing, as they exist as direct representatives of the sound of traditional New Orleans jazz as it was played in the 1930s, an era which is otherwise nearly totally lost on record.

By 1942, the New Orleans Jazz “Revival” was officially underway; christened by a series of recordings of Willie ‘Bunk’ Johnson. Unfortunately the Kid was not to face the microphone again. Kid Rena had always been a big drinker, and by 1947 his health was poor to the extent he had to stop playing. On April 25, 1949 Kid Rena died at age 50, and outside of what must’ve been a HELL of a funeral parade in New Orleans, the passing of Kid Rena commanded little attention. Rena remains to date one of the most obscure and enigmatic figures in the annals of recorded New Orleans Jazz.

The complete recordings of Kid Rena are on one excellent CD, Prelude To The Revival vol. 2: Kid Rena 1940 (American Music AMCD-41). It may be ordered through www.jazzology.com Special thanks to Frank Powers for his help with this article.

Redhotjazz.com was a pioneering website during the "Information wants to be Free" era of the 1990s. In that spirit we are recovering the lost data from the now defunct site and sharing it with you. Most of the music in the archive is in the form of MP3s hosted on Archive.org or the French servers of Jazz-on-line.com where this music is all in the public domain. Files unavailable from those sources we host ourselves. They were made from original 78 RPM records in the hands of private collectors in the 1990s who contributed to the original redhotjazz.com. They were hosted as .ra files originally and we have converted them into the more modern MP3 format. They are of inferior quality to what is available commercially and are intended for reference purposes only. In some cases a Real Audio (.ra) file from Archive.org will download. Don't be scared! Those files will play in many music programs, but not Windows Media Player.