Riccardo Scivales was in his teens in Mestre, in the commune of Venice, when he discovered the English Progressive rock band Yes with Rick Wakeman on keyboards. He especially loved listening through his headphones to Wakeman’s albums of the 1970s: The Six Wives of Henry VIII, Journey to the Centre of the Earth, and The Myths and Legends of King Arthur and the Knights of the Roundtable. “Prog rock had the greatest keyboard rock players of all time” was Riccardo’s conclusion at the time. At age 15 Riccardo started taking piano lessons.

At the same time, the musical theme of the American movie The Sting became popular on Italian radio. “The Entertainer” was a ragtime two-step piano piece, and Riccardo liked listening to it and became curious about ragtime. However, his piano teachers were classical musicians, and “Jazz was even prohibited in conservatories,” says Riccardo. “As far as I can recall, it was Ragtime—and namely the huge success of Scott Joplin’s ‘The Entertainer’—that started to change things!”

As a curious young person in the pre-internet era, Scivales says, “. . . you discovered a few things, and you tried immediately to deepen your interest in them” by tracking down every lead. In pursuit of ragtime, Scivales found “truly great books . . . and read eagerly all the pages of them.” He bought LPs (“the record dealers always kept me updated”) and studied the liner notes. He found jazz magazines from America and France in the shops, and corresponded with the writers. From ragtime, “the transition to Stride piano was short!”

Ragtime and its successor, stride, can feel like clockwork with the oom-pah figures in the left hand. The “oom” is a low note on the first beat, and the “pah” is a chord in the middle of the keyboard. The hand swings metronomically back and forth between the two, suggesting a march or a dance. The great stride pianists of the 1920s, led by James P. Johnson (1894-1955), broke the monotony. Instead of repeating oom-pah, they might play oom-pah-oom-oom / pah-oom pah-oom, and play it fast, accurately and irresistibly while the right hand delivered the melody with complex harmony and blues inflections. Having wide hands and a driving energy made a stride pianist even better.

“When I first heard James P. Johnson and his peers, it was like dynamite for me, [with] a lot of unorthodox stylings and exciting rhythmic displacements . . . .” Scivales wrote in an interview for this article. (We also emailed, messaged and talked on Skype.)

Riccardo wanted to learn to play it, but he couldn’t find any editions in print, for two reasons. First, a print version would have to be simplified. And furthermore, “these masters were very jealous of their tricks and did not want to put them in print.” So Scivales—now a university student—began to take down what he heard on the records. “I wanted to know how that music worked. I tried to transcribe the real thing that they played,” note for note.

In his newest book, just out in Italian and coming soon in English from Scivales Music, he tells how he did it.

He listened carefully and repeatedly to analyze the shape of the piece and “tune in” with the performer. Then he would begin with the lower register notes and work up through the internal harmony to the melody. Finally, he would transcribe the left hand chords in the center of the keyboard. He worked from cassette tapes so he could rewind and listen, rewind and listen, and slow the music down to catch the rhythms. By his own estimate he made at least 300, maybe 400, transcriptions. Many were for his books and others were commissioned.

“Squeeze Me” by Thomas “Fats” Waller, played by Willie “the Lion” Smith, was the first to appear in an American magazine, The Piano Stylist, in 1989. I was the editor, and I always looked forward to receiving a manuscript in the mail from Riccardo. (Introducing him to the readers, I wrote “The author is a young Italian pianist who has transcribed many American jazz recordings, specializing in the pre-WWII Harlem stride school. Scivales also performs in Venice, in St. Mark’s Square.”)

His notation was orderly and readable with a calligrapher’s touch. I imagine him using a wide-point pen to draw a bar over eighth note groups, and a thin point to draw little flags on single eighths and grace notes. “Seeing [the piano solos] on paper,” he told me recently, “I was able to understand them better. (That does not mean I played them better!)”

Other pianists in the book were in print for the first time. Riccardo wrote in the preface, “As far as I know, up to this day no transcriptions of the recorded solos by Luckey Roberts, Donald Lambert, Cliff Jackson, Hank Duncan, Joe Turner, Claude Hopkins, and Dick Wellstood have ever been published in sheet music form.” He pointed out connections between them in their bios. “Duke Ellington claimed to have been deeply influenced by The Lion’s style as early as the 1920s.” “Waller was like a son to James P. Johnson.” “At one time [Donald Lambert] even challenged Art Tatum.” At fast tempos, Wellstood “tended to duplicate Lambert’s wild phrasings.” These piano “ticklers” were friends and competitors.

Ekay Music published three more books by Scivales. Now out of print, they have become rare and expensive. A new copy of The Right Hand According to Art Tatum (1998) was on amazon.com in August, 2020, for more than $500. In July I saw Jazz Piano: The Left Hand (2005) for almost $1,000 (as I write, it’s $237). At the same time, the economy has shrunk, families have little money, and there are no gigs. So Riccardo is deploying his new self-publishing company, Scivales Music, to produce, promote and sell his books online and by mail. There will be electronic editions too. He will traffic the orders from the apartment in the Musile di Piave in Venice, where he lives with his family.

“I’m very grateful to my original publisher, the great Edward J. Shanaphy of Ekay Music, for giving me this wonderful opportunity. . . . I love to do this self-publishing,” he says, “and I have to do it.” 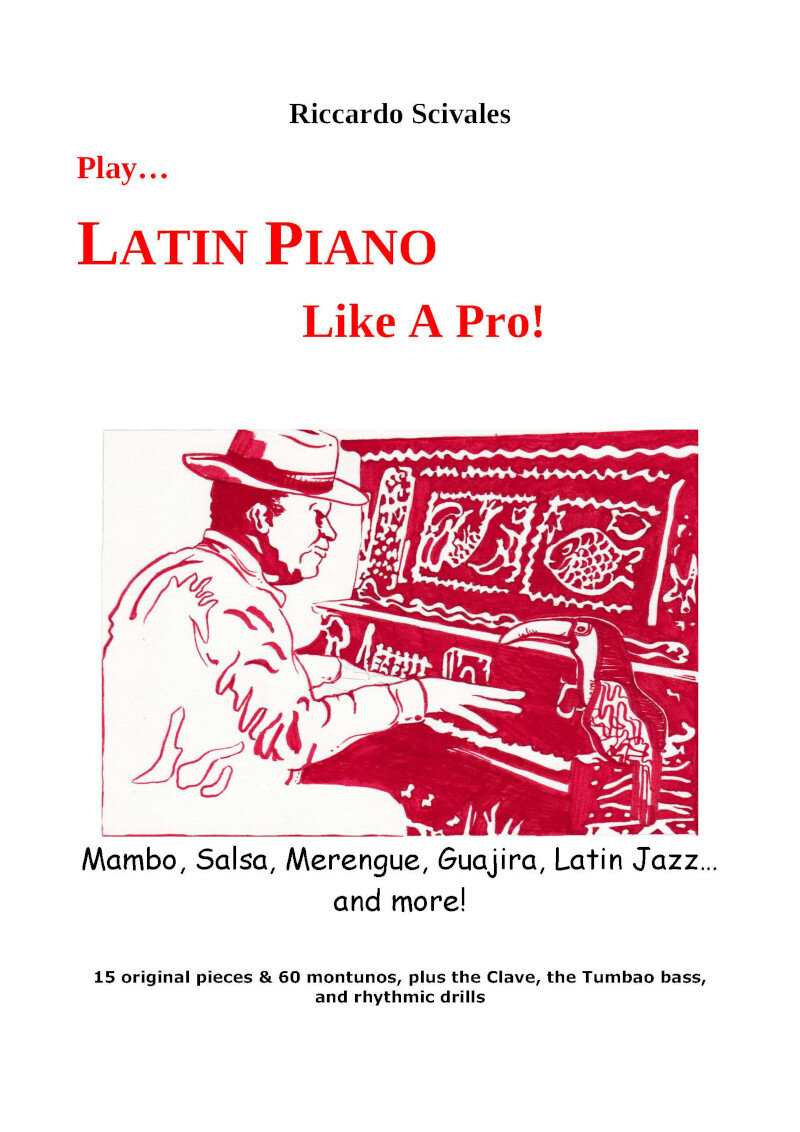 While quarantined at home in 2020, Riccardo energetically gathered articles and essays from thirty years of writing for his new, self-published Storie di Vecchi Pianisti Jazz e di Come Funzionava la Loro Musica, now on amazon.it as a book or in a Kindle edition and coming soon in English as Stories of Early Jazz Piano Giants and How Their Music Was Made and Works. He uses narrative, musical examples and pictures in chapters about the stride greats and those who followed—Gershwin, Ellington, Teddy Wilson, Nat Cole, Johnny Guarnieri who played “Maple Leaf Rag” and “Lulu’s Back in Town” in 5/4 time, and more. And there is a new chapter on the young Thelonious Monk. Next, after Stories, Scivales Music will publish Riccardo’s book about Latin piano styles. The cover art is by Riccardo’s daughter, Martina Scivales.

If Scivales could interview the stride “ticklers” today, “The first thing I would ask them would be to tell me something about their legendary and celebrated peers and predecessors” who left no recordings. The mythical Richard “Abba Labba” McLean, for example, greatly influenced James P. Johnson (“I fell on his style and copied a lot of it,” James P. is quoted as saying), Willie “the Lion,” and even Thelonious Monk. “Monk plays a modern version of Stride piano,” Riccardo observes. “I would also ask the ‘ticklers’ about the real amount of improvisation in their playing. Some people said that in their music there was not much improvisation, but I would not be so sure about that.” So next in line, after the Latin piano, Scivales plans to write about improvisation in ragtime.

And as live music comes back after the pandemic, he will return to the stage. But not the stride stage. All the transcribing—“my portable cassette player, the billions of times I pushed its ‘play’ and ‘stop’ buttons . . . and then my handwriting of those transcriptions”—produced chronic tendonitis so that now at age 60, Scivales plays and writes for his long-running prog rock band, Quanah Parker. You can see them in performance on YouTube. And if you don’t recognize the name, the young warrior Quanah Parker became the last chief of the Comanche tribe on the Great Plains. Riccardo is very interested in his story.