As I begin writing this column for February, we are only a week into the new year. However, I have already had what will be a highlight of the next twelve months. Coordinating the effort to congratulate Andy Senior on his fifth anniversary publishing The Syncopated Times has been a remarkable experience.

To see the outpouring of appreciation for this publication, from such a cross section of readers and supporters has been a thrill. I can only imagine what the sentiments mean to Andy. The paper has been a literal lifeline for me, I have been able to connect with old friends and make many new ones as a result.

In addition to his publishing prowess, Andy is a fine writer, and he brings the wealth of knowledge he has accumulated producing his Radiola! radio programs going back to 2005. 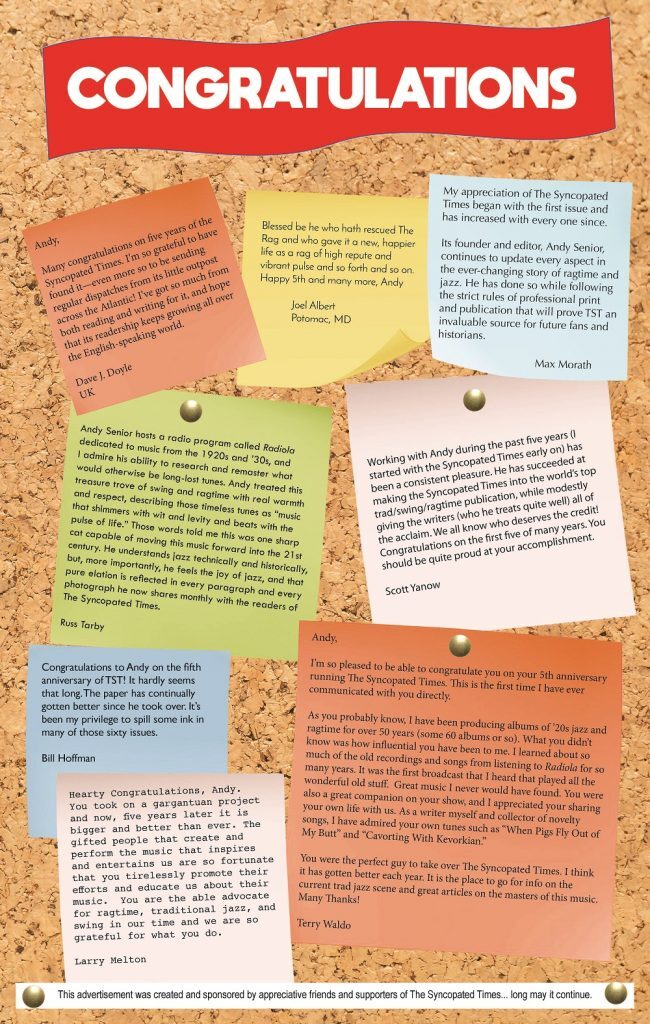 When many of us realized the fifth anniversary was approaching, the urge to do something began to germinate. However, knowing Andy will be uncomfortable with a flashy show of appreciation, much less affection, we wondered what to do. The centerfold in this issue is the result of that pondering. It is everything Andy would not have wanted us to do but we just could not help it.

Through this I have personally had one delightful experience after another. As congratulations began to appear in my inbox, comments were address to me as well. Many commented on Sedalia Festival experiences or on articles I have written. I had an occasion to call Tex Wyndham about the project and I cannot express how wonderful it was to hear his voice again. We met many years ago and I have always admired him. He has had a wonderful career in ragtime and jazz. Max Morath who was such a support to me in the early festival days kindly wrote an enthusiastically appreciative note and Terry Waldo, another old friend who goes back to my ragtime beginning pulled out the stops in his praise of Andy’s influence on his long career.

Several other friends with whom I had lost contact wrote and a thread of emails ensued as we visited about old times. 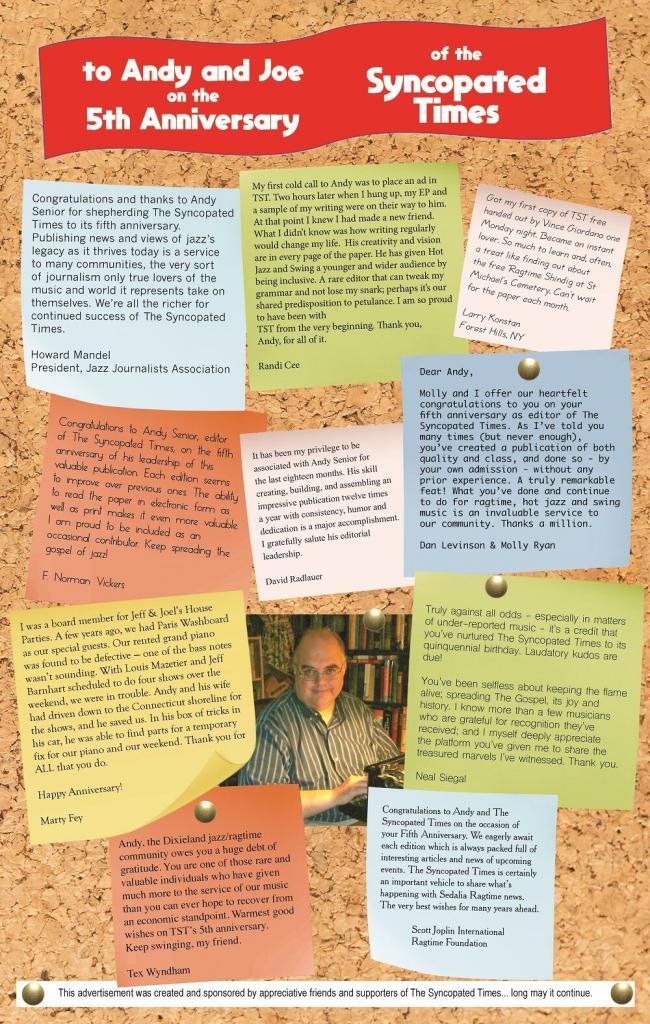 However, I will always remember this TST anniversary as the time I connected with Dan Levinson. Now this has all the possibilities for an exceptionally long and rambling explanation, but I will try to keep it short. A year ago, the daughter of musicians Dan and Maureen Summers (Buffalo and St. Louis) contacted me about donating some of her parents’ things to me perhaps for the Sedalia Ragtime Archive. She was trying to place their collection where it would be appreciated as Dan and Maureen were downsizing.

Most of what she sent in four large cases dealt with jazz recordings and we just do not have space for most of the donation. The strange conditions of the past year however meant I did have time to sort through the old correspondence and read some of the periodicals. I noticed a good deal of writing between Dan Summers and Dan Levinson. Thus, when Dan Levinson sent me his note for Andy, I casually asked him if he remembered the Summers.

(Now as you read, imagine the descending notes of the Twilight Zone theme music becoming louder in the background.)

Dan instantly wrote back to say that he had just visited by phone with the Summers, but they were not sure what had happened to Dan’s papers, tapes, and records. And then, I piped up to write that I happened to have been the recipient of some of Dan’s collection one year ago, from a daughter in St. Louis who was wise enough NOT to throw out her parent’s archive. 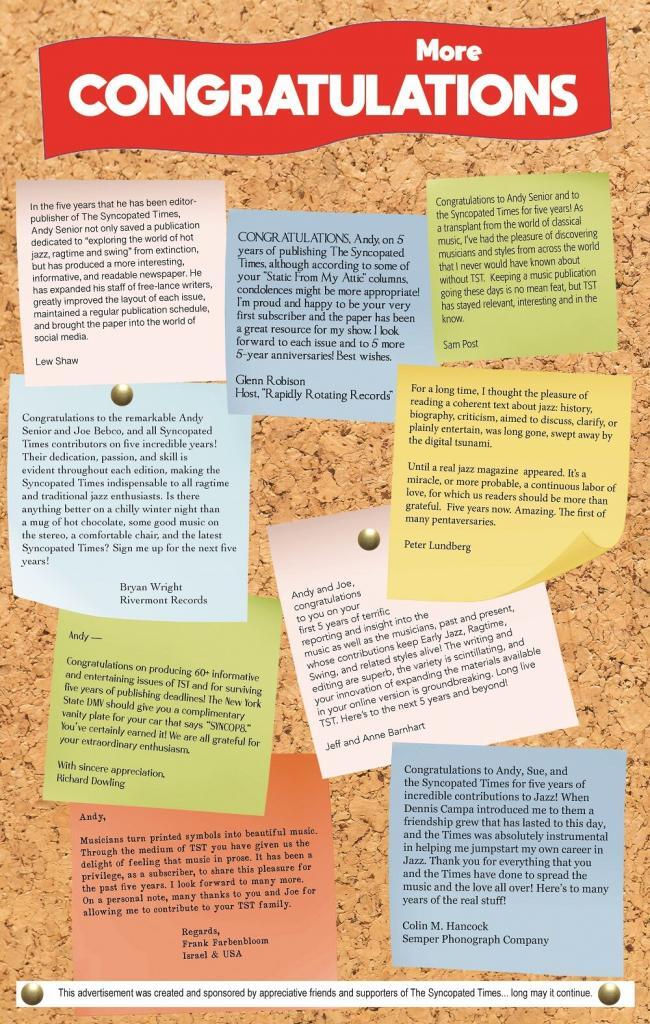 There is no question why I am such a devoted supporter of The Syncopated Times. Thus, I will be sharing information about the collection with Dan Levinson who will appreciate his old friend’s ephemera.

It has also been an opportunity to correspond further with several of Andy’s original ensemble of talented writers and early subscribers. It was nice to personally wish Lew Shaw a happy 95th birthday. Lew’s second book is just out. Bill Hoffman was kind enough to write and let me know that some of my family’s old haunts in Lancaster County PA are still there. Bill wrote the travel guide to the area. It was great to hear from originals Russ Tarby and Norman Vickers and to get a note from Scott Yanow for Andy.

Russ is active in Andy’s area of upstate New York and Norman is going strong in Pensacola. I have really come to appreciate their columns and articles and Scott’s record reviews keep me current. It was also great to hear from Andy’s very first subscriber, Glenn Robison. His informative weekly radio program Rapidly Rotating Records informs and entertains Southern California from Santa Catalina Island.

Every month since October 2016 Andy has allowed me to ramble forth in this paper, tolerating my excessive wordiness, grammatical blunders, typos, and my imprinted tendency to double space after periods drilled into me by Miss Worthington, my high school typing teacher 60 plus years ago.

The readers and advertisers supporting TST comprise a small but intimate community of bright, talented, and caring people. The group is so appreciative of this publication, especially knowing the many challenges, including printing and mailing issues Andy has had. He puts out the paper almost entirely by himself. In the last two years Joe Bebco has exponentially expanded the paper’s impact in the digital world, not to mention by contributing his wonderfully written articles.

The best way to show appreciation for this “little newspaper that could,” (and has) is to give a TST gift certificate or encourage more subscribers. The pandemic has hit many extremely hard and none have been more impacted than those in the entertainment industry. So, CONGRATULATIONS ANDY and may you be given the health, stamina, resources, and fortitude to keep celebrating America’s music at a time when the nation has never needed it more.