Led by pianist Ernest Borbee, this was among the earliest recording ensembles characterized as a “jass” group, the third after an Original Dixieland Jass Band disc was issued in March 1917 by Victor and a Wilbur C. Sweatman and His Jass Band disc was issued in May 1917 by Pathé (the fourth group identified on records as a “jass” ensemble was the Frisco “Jass” Band, an Edison group led by Rudy Wiedoeft). Though Columbia’s first so-called “jass” group, Borbee’s musicians in fact played dance music in a genteel fashion typical of its time. This was not the boisterous music of the Original Dixieland Jass Band, Sweatman, Earl Fuller’s Famous Jazz Band, or others who played “jass” in this period. 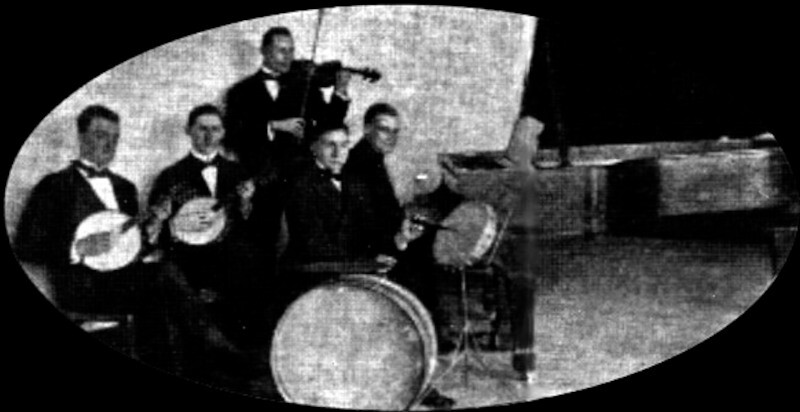 The orchestra made its recording debut on February 14, 1917 with Josephine Vail’s “It’s A Long, Long Time” (a fox trot) and Harry Von Tilzer’s “Just The Kind Of A Girl You’d Love To Make Your Wife” (a one- step), issued on Columbia A2233 in July 1917. Columbia’s next “jass” record was issued weeks later, on August 10. This was the Original Dixieland Jass Band’s sole disc made for the American company (A2297), featuring “Indiana” and “Darktown Strutters’ Ball,” cut on May 31, 1917.

Brian Rust’s American Dance Band Discography gives the name Borbee’s Tango Orchestra because Columbia files reveal that the band recorded as the Tango Orchestra at its first session. However, the label for Columbia A2233 gives the name as Borbee’s “Jass” Orchestra. The band was evidently renamed a “jass” orchestra at the time of the disc’s release to take advantage of the Original Dixieland Jass Band success–both as a live act at Reisenweber’s and also as a Victor recording ensemble–and the craze for the new dance music. It is unlikely that Borbee’s musicians knew, when recording in mid-February, that they would be identified as “jass” musicians when their debut record was issued in July. In July Columbia also issued Prince’s Band performing the Von Holstein and Sanders’ hit “Hong Kong,” identified on records as a “Jazz One-Step,” probably the first time “jazz”- -as opposed to “jass”–appears on a label. Clearly Columbia executives wanted to exploit the craze but had not successfully recorded any “jass” artists in early 1917. The Original Dixieland Jass Band had auditioned for Columbia in late January but did not record at that time.

On August 17, 1917, Borbee’s “Jass” Orchestra recorded two additional titles for Columbia, “Paddle-Addle” (identified as a fox trot) and “The Ragtime Volunteers Are Off To War” (a one-step), issued as A2363 in November.

In 1923, Ernest Borbee recorded five titles for the small Olympic label as pianist for the Original Georgia Five. Page 94 of the June 1923 issue of Metronome announced that the band had formed a corporation, The Original Georgia Five, Inc., “to protect their name from imposters.” The five musicians, led by trombonist William Drewes, had been together “for the past four years.” The article states, “The remarkable feature of the organization is that no member is more than twenty-three years of age.” If this was true, then Borbee was a teenager when he made his first records in 1917. Metronome includes a photograph of band members, Borbee at the piano. At the time the band was booked for a long engagement at Brooklyn’s Rosemont Ballroom.

Borbee is otherwise obscure. In Jazz: The American Theme Song (Oxford University Press, 1993), James Lincoln Collier states, “In view of some sixty years of grousing over the fact that a white group has the honor of making the first jazz record, it is worth noting that a black group, Borbee’s ‘Jass’ Orchestra, was the first to issue a record with the word ‘jazz’ on it; the Borbee group, however, was by no means a jazz band.” Actually, the word “jass” is on the label, not “jazz.” Also, Borbee’s Columbia disc was issued months after the Original Dixieland Jass Band’s first Victor disc (18255) was released in mid- April 1917 (Victor quickly placed this “jass” disc on the market, eager to take advantage of the Original Dixieland Jass Band popularity at Reisenweber’s). A photograph in Columbia’s September 1919 catalog of Borbee’s “Jass” Orchestra (shown are five musicians–violin, piano, two banjos and drums) establishes that the musicians were white.

By Tim Gracyk
from the book “Popular American Recording Pioneers 1895 -1925.”

Thanks to Verne Buland for the audio restoration of the songs on this page.