The Secret Six is the latest hot jazz band to establish itself in New Orleans, joining in the top tier an exciting roster of groups that formed in the years following Katrina including Tuba Skinny, the Shotgun Jazz Band, and the Smoking Time Jazz Club. There were many others in intervening years but perhaps The Secret Six represent a new wave of creativity following the lockdown shakeup.

They formed as a direct result of the pandemic, which forced the post Katrina jazz revival out of the bars and back to its roots on the street. Musicians need to keep their chops up, and make money, and for normally busy musicians with cabin fever the parks of New Orleans became a 2020 refuge. A few of those musicians, all from other bands, began referring to their busking band as The Secret 6, however many they actually were.

This may be me repeating some sort of lore, but I once heard that when Michael Magro joins a busking band the group will, by deference, refer to themselves as the Loose Marbles. True or not this lore is central to the flowering of New Orleans jazz among young people in the years following Katrina. Started in the parks of New York in the early 2000s, where they left a lasting legacy in similar groups like the Cangelosi Cards and the Baby Soda Jazz Band, the Loose Marbles migrated to New Orleans in 2007. Led by Magro and Ben Polcer they provided a street level boot camp for young musicians who wanted to learn to play traditional jazz. As someone who lived in the French Quarter before the storm I can tell you that there was not a lot of traditional jazz coming from busking bands in the early 2000s. It was the same Appalachian-rooted music you might here in similar tourist districts nation wide.

Ben Polcer was soon joined in New Orleans by his father and mother. The family gigged together in clubs, and his father Ed Polcer joined Ben with musicians a third his age playing the streets. Among them were several members of the Secret 6.

Ed Polcer is well known to traditional jazz fans. He got his musical start playing in a vaudeville act with his sister. While at Princeton he was part of the Tigertown Five during a period college trad bands could gain national recognition. They played Carnegie Hall and the wedding of Princess Grace and Prince Rainier in Monaco. After touring with Benny Goodman in 1973 he became the manager and house bandleader at Eddie Condon’s Jazz Club during the rest of the ’70s and through to 1985. He has been a regular at jazz festivals and parties as both a musical director and a musician. He has toured internationally, including a trip to Japan with The World’s Greatest Jazz Band. He has performed for five US presidents and the jazz loving King of Thailand. Last I heard the now 85 year old Polcer might be appearing with the Secret 6 at the French Quarter Festival and New Orleans Jazz and Heritage Festival this spring. 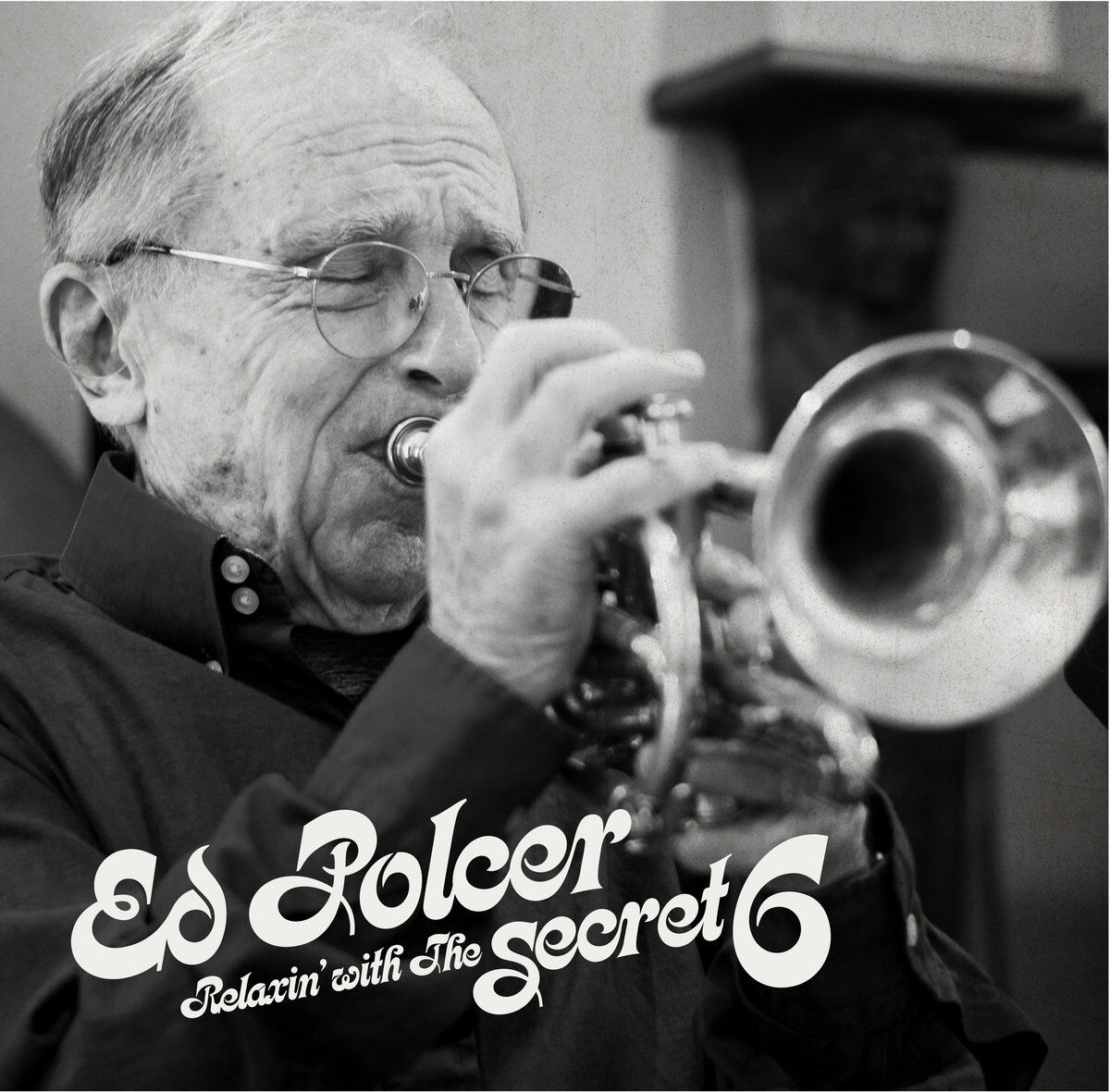 Ed Polcer Relaxin’ With The Secret 6 was released in March in time for the festival season. Like most albums worth listening to these days, it can be purchased through digital download direct from the band on Bandcamp. Physical CDs for all three Secret 6 albums, and innumerable other NOLA based groups you may not realize offer physical CDs, are available from the Louisiana Music Factory.

Ed definitely takes the lead on this album and the result is a slightly different grove than the group’s two efforts without him. Not surprisingly it is a groove that our older readers will appreciate. Hot but laid back rhythm forward performances of familiar but never overplayed standards of the repertoire: “My Gal Sal,” “Squeeze Me,” “Somebody Stole My Gal,” “My Monday Date,” “When You’re Smiling,” and eight more. The album name was inspired by the inclusion of “Relaxin’ at the Touro.”

Aside from a core that includes bassist John Joyce as the leader the line up of the Secret Six can vary. Both of their albums this year also include notable reedman James Evans as well as Hunter Burgamy on banjo. The Ed Polcer date also includes Zachary Lange as a second cornet to Ed’s first, Craig Flory, known from Tuba Skinny, as a second reedman, and Robin Rapuzzi, also of Tuba Skinny, on washboard and drums. James Evans, long overdue for a profile in this paper, doubles on trombone.

John Joyce tells me “Ed has always kept us on our toes with his vast knowledge of songs and amazing jazz stories of all the legendary players and recording sessions he has been a part of over the years. Everyone in the band wants to go out to the park and play with Ed when he is in town. I figured it was past time to get Ed into the studio.”

Polcer’s playing is excellent and not simply “for his age,” he has always been one to stay active and challenge himself, he ran the New York City Marathon for the first time at age 57. Voices will unavoidably demonstrate signs of age, but for me there is something especially rewarding about the vocals of an older man presenting songs he has spent a lifetime inhabiting. The calm intimacy with the material makes each new performance worthwhile. While his vocal on “Baby, Won’t You Please Come Home” won’t win any Grammys, as part of the collective whole it draws on whispers of countless performances alongside the several generations of artists he has performed it with.

Like every generation of traditional jazz musicians that proceeded them the lodestar of this one, now entering their 40s, remains the music of the teens through 1930s. I’ve heard a few musicians of the old guard complain that the younger generation isn’t doing it right, and they offer very specific critiques of musical elements of their performances. These critics source what they hear missing in the lack of direct connections to legendary performers that even those now in their 60s can often boast of. Assuming this critique to be valid rather than a simple micro evolution in the music that caters to today’s audience (what I personally feel), it is through the direct mentorship of elder statesmen like Mr. Polcer that the younger generation can connect with the 80 years of playing that happened after playing early jazz became jazz preservation or revival.

In recent years I have noted the results of intergenerational mentoring creeping in. Following the practice of the Smoking Time Jazz Club, which features Joyce and several other Secret 6 members, each track on their albums cites an individual performance as their “favorite.” That doesn’t always mean it is the basis of the performance on the album, but it does provide the listener with a wonderful playlist of classic performances to explore. On There’s Something In My Eye And It’s You!, the Secret 6 album from earlier this year, several of those favorite renditions include revival era material from Sammy Rimmington, Narvin Kimball, and Acker Bilk, as well as the usual golden age suspects. They have been doing their homework.

In addition to Joyce, Evans, and Burgamy, the lineup on this one includes Mike Voelker on washboard, Jory Woodis, reeds, Satoru Ohashi on cornet/trumpet, Reid Poole on cornet, trumpet, and once on reeds, and Russell Ramirez on trombone. They are joined by Heidi Evelyn for vocals on two tracks. This lineup is who you would be likely to catch going out to see the group and sounds much more like the band you would hear when you got there.

It’s significantly more upbeat sound than the set with Polcer, much less focused on the vocal line, with more solo runs, counterpoint, use of the banjo, and other instrumental flame. A party sound fit to put a high step in the walk of passersby. That I prefer this album may stem from me being part of their generation, and I fully expect much of our readership to gravitate to the other. May I suggest both!

Fifteen titles include, in addition to the revivalists, a number of Louis Armstrong classics, and adjacent material from Johnny Dodds and King Oliver—think “Dippermouth Blues,” “Wild Man Blues,” “Creole Chop Suey,” etc. There’s also an obscure washboard band title, and “Ride Red Ride” from Lucky Millinder, a jam demonstrating their focus on entertainment and fun that can sometimes be lost by other bands. “Stranger on the Shore,” from Acker Bilk, provides a breather, perhaps a slow dance, midway through.

Hunter Burgamy, stands out with great vocals and just right banjo work. James Evans is excellent as always, sometimes in cahoots with Jory Woodis who Shelly Gallichio profiled back in October 2020. Give “East Coast Trot” a listen for their “duel.” Satoru Ohashi and Reid Poole both bring great feeling to their playing and pair well. Ohashi is the only addition to this lineup since their 2021 release and they put the second horn to full use with a fuller, more dramatic sound. Joyce and Voelker keep a great rhythm without intruding on the fuller front line rounded out by Ramirez’s signature trombone.

This is a band to follow, and to seek out on your next stay in the Big Easy. I recommend all our readers acquire these excellent albums and support the artists who will be mentoring generations not yet born. As Ed Polcer told our own Lew Shaw in a 2015 American Rag profile:

“I’m busking on street corners with a cadre of musicians in their 20s and 30s where folks of all ages lose their inhibitions and dance to our music. I can tell you from personal experience that there are dozens of clubs and bars in all five boroughs of New York City as well as in New Orleans where jazz is presented every night and is being discovered, enjoyed and re-invented by the under-35 audience. So forget about sitting around in discussion groups. Get out there and enjoy the party!“