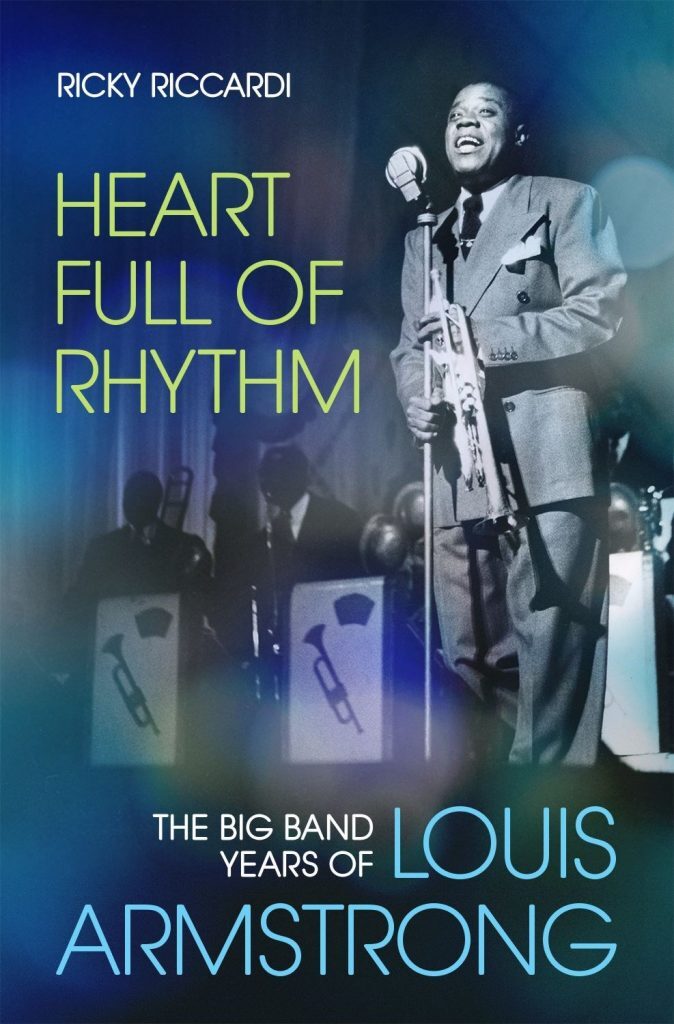 Even in the midst of the Great Depression, money rolled in steadily for the world-famous Satchmo, but—don’t doubt it—the 1930s were a real scuffle for Pops.

Having ably pioneered small-group jazz in the 1920s with his Hot Fives and Sevens, he now found himself the target of critics who moaned and groaned about his fondness for pop tunes and Broadway melodies. They complained that Armstrong was selling out his art in favor of making a grab at the golden ring of popularity.

While annoying, such criticism rarely fazed the man who simply went about his business following his instincts both musically and managerially while entertaining millions along the way.

What made the scuffle worse were Pops’ dealings with a shady booking agents, bodily threats from stony-faced gangsters, repeated conflicts with prominent big-city club-owners, daily indignities suffered due to systematic racial discrimination, a couple minor marijuana arrests, and—worst yet—a distressing series of health problems. One that threatened his chops was especially worrisome. He played his horn with such ferocity—often blowing hundreds of high Cs in a single performance—that he split his lip repeatedly. As if that bloodshed wasn’t enough, he also underwent two tonsillectomies, and was later treated for ulcers and kidney stones.

Meanwhile, Pops’ personal life was plagued by instability. He had separated from Lil Hardin and attempted but failed to reconcile with her in 1931 after he’d taken up with a gold-digging chorus gal named Alpha Smith. He eventually tied the knot with Alpha mid-decade but gladly untied it in 1942. A month after he divorced Alpha, he married the love of his life, Lucille Buchanan Wilson, a former Cotton Club dancer who he’d met at the famous Harlem nightclub in 1939.

That happy ending belies what must have been a harried hot-potato juggling act as Louis maneuvered his hectic love life further complicated by his numerous liaisons with less-serious sweethearts.

Many admirable biographies of jazz giant Louis Armstrong have been produced over the 49 years since his death. Such capable chroniclers as Gary Giddins, Thomas Brothers, Terry Teachout, Lawrence Bergreen, and James Lincoln Collier have deeply studied his life and music before recording their observations in books.

Now in Heart Full of Rhythm: The Big Band Years of Louis Armstrong author Ricky Riccardi focuses on the 1930s and ’40s, a period in Armstrong’s life that has long deserved more detailed examination.

The writer makes good use of primary sources to explain Armstrong’s decision to front a 14- to 19-piece ensemble for 18 years, from 1929 to 1947 after pioneering small-group jazz with Joe Oliver, Lil Hardin, Earl Hines, and others in the late Twenties.

As director of research collections at the Louis Armstrong House Museum in Queens, N.Y., Riccardi enjoys access to Pops’ letters, contracts, diaries and countless audio tapes the trumpeter had made before his death in 1971.

“For this entire book, I barely consulted any of the earlier Armstrong biographies.” Riccardi told an interviewer. “I wanted all of my sources to be contemporary newspaper or magazine coverage from the period, or the words from [his fellow] musicians themselves. I wanted the period to speak for itself.”

That was a wise decision by the biographer. For instance, he lets reedman and reefer man Mezz Mezzrow testify about Armstrong’s lip damage and grass habit. Mezzrow’s blow-by-blow recollection of Pops’ ruptured lip hemorrhaging at a Christmas Eve show in 1932 at Baltimore’s Lehman Hall vividly recreates one of most dramatic scenes in the great trumpeter’s life.

In his perusal of previous bios, Riccardi found that Armstrong’s middle years were under-analyzed and under-appreciated even though he was becoming an international pop star with hits such as “Star Dust,” “Jeepers Creepers,” “When the Saints Go Marching In,” and “When You’re Smiling” coupled with notable appearances on radio and films.

Perhaps the singular most astounding accomplishment of Heart Full of Rhythm is Riccardi’s thorough documentation of the staggering workload relentlessly undertaken by Armstrong and his musicians.

That’s surely one of the reasons his backing bands often drew snide gibes from critics and concert-goers. Regardless of their talent or lack thereof, the musicians were seriously overworked.

Charlie Holmes remembers what a grind it was in 1936, when Pops was fronting Luis Russell’s band. The saxman said they rehearsed new material every day from 2 to 5 pm, played three shows nightly from 7 pm to 3 am and then made their way to the recording studio the following morning at 9 am.

The demanding schedule, Holmes said, “didn’t help the band’s performances, know what I mean? You’re dead tired and don’t take no interest in what you do.”

When Armstrong added radio appearances to the mix, the grind became even more of a backbreaker. And when he toured by bus through the segregated South, itineraries were disrupted by the difficulty of accessing meals and lodging.

Riccardi fully explores Pops’ tireless work ethic, but another area in which the author excels is his detailed discussion of Armstrong’s management situations. In 1929, wife/pianist/manager Lil Hardin had given way to New York recording director Tommy Rockwell, who encouraged Pops to sweeten his hot sound with pop tunes. Rockwell, however, had a darker side. After Pops reneged on a contract, the agent sent a hood with a baseball bat to threaten the trumpeter backstage.

In May 1930 Armstrong signed with veteran vaudeville booker and former RKO executive Johnny Collins, a Chicago native who secured him work on the West Coast while trying to assemble a suitable orchestra. Backed primarily by Les Hite’s orchestra in California, Pops packed ’em in and made nightly radio broadcasts from Sebastian’s Cotton Club in Culver City while often appearing on the vaudeville stage in Los Angeles along with dancers and comedians such as the Nicholas Brothers and Butterbeans & Susie.

While Louis remained on the West Coast—away from Rockwell, the Chicago Outfit, and the angry owners of Connie’s Inn in NYC—Collins scored a coup by signing the trumpeter to perform in his first Hollywood movie, Ex-Flame, a Liberty Films production.

After Collins botched a European tour in 1933, Armstrong hired English bandleader Jack Hylton as tour manager and remained on the road backed by various British and French musicians including several American expatriates.

After he returned to the states in 1935, Armstrong reconnected with an old friend from his Chicago days, booking agent Joe Glaser, and the rest is history. Riccardi acknowledges the synchronicity: 1935 also marked the start of the Swing Era, and Glaser advised his client to “play pretty.”

Pops took the advice to heart, improved his vocal diction, cut back on hitting those histrionic high notes, and enthusiastically embraced pop tunes such as “I’m in the Mood for Love,” “La Cuchuracha,” and even a handful of Hawaiian novelties. Influential jazz critic Leonard Feather labeled such material “junk.”

But the young lions had a bone to pick with Pops. As with his explication of the gangster threats in the early-’30s, Riccardi delivers a thorough overview of the bebop controversy of the mid-’40s when Dizzy Gillespie and Armstrong fought a battle royale in the press.

Better than any other Armstrong biographer, Riccardi explains in great detail Pops’ often-strained relationship with managers, club owners, and prohibition mobsters. But despite such conflicts—and with racism adding insult to injury—one of the secrets of Armstrong’s success was his contagious optimism. So it’s no surprise that Riccardi celebrates Pops’ humanity. For instance, the writer dutifully records Armstrong’s mutual admiration of fellow musicians and his lifelong love of marijuana.

“Swing That Music” composer/arranger Dutch Gerlach said simply, “He loved life. He was a real human being with a great sense of humor.”

Over the last three decades of his life, Armstrong was unfairly characterized as an Uncle Tom, but Riccardi maintains that the jazzman’s contributions to American culture were completely derived from his experience as a negro raised in the deep south.

“Armstrong was unapologetically black,” Riccardi writes, “taking the same songs being performed by the all-white bands and infusing them with a combination of swing and slang and smoke (of the marijuana variety), changing the sound of music and the shape of our culture for eternity.”

Each of the book’s chapter titles is accompanied by the dates it covers, and that’s a great help to the reader. Too many historical non-fiction works wax eloquently about their subject, but in so doing lose track of the chronology. Not here.

On the other hand, annoying typographical errors clearly caused by a digital spell-checking system appeared throughout the galley copy I reviewed. For example, Lil Hardin is depicted “shaking her heat” instead of her head, and commas repeatedly appear in places where apostrophes should be.

To title this eye-opening mid-life biography, Riccardi chose Heart Full of Rhythm, culled from the Dutch Gerlach tune “I’ve Got a Heart Full of Rhythm” recorded by Armstrong’s orchestra for Decca in 1937. The final lyric sums up the great man’s life and outlook as he sings, “Let the great think I’m small. I’ll laugh at them all. Cause I’ve got a heart full of rhythm.”