Leah Bezin “The Heartbeat of the Band”

Maryann collected antiques. One day she brought home a hand-cranked Victor console phonograph stocked with records, won at a farm auction for $2.50. Leah was immediately fascinated with the records, which included “Roodles” by the Coon-Sanders Orchestra and “Doctor Jazz Stomp” by Jelly Roll Morton’s Red Hot Peppers, as well as discs by Fred Waring’s Pennsylvanians, George Olsen, and Ben Bernie.

Leah’s discovery of hot dance and jazz led to her interest in the banjo. “The banjo,” she says, “is the heartbeat of the band.” Tom Nayder insisted that all his children learn piano first to get the fundamentals of music before trying another instrument. Having the basics of piano, Leah received banjo tutelage from the clarinet player for the Chicago Shrine Circus. In addition to chords, he taught her single-string technique using second violin parts. But, she says, “I wanted to play Roodles.”

Leah dropped banjo lessons during high school, though she would occasionally play for school productions. She never lost her interest in the music and would scour the LP bins for jazz reissues. There was very little 1920s jazz and hot dance available on vinyl at the time—and 78s were expensive. She was delighted eventually to find Coon-Sanders and Jelly Roll Morton on the RCA Vintage series, and Bix Beiderbecke and his Gang on Columbia.

It was while listening to Bix that Leah picked up her banjo again and discovered that she could play along with the record. Around this time she found that hot jazz was being played throughout Chicagoland. She started taking her banjo to sit in on jazz gigs with Mike Walbridge and his Footwarmers and Kim Cusack and the Salty Dogs.

On one such excursion to the Chalet Loft in Willow Springs, Leah met trumpet player and arranger Mike Bezin, leader of the West End Jazz Band, and she soon was sitting in regularly with the band, playing such rowdy venues as John’s Buffet in Winfield.

“There were always fights breaking out,” says Leah. “One time I got hit with a bar rag.”

In those days Mike specialized in the West Coast Revival repertoire, as exemplified by Turk Murphy‘s “Big Bear Stomp“. After his first band split up, Mike reformed the WEJB with new personnel including Leah, where she campaigned for authentic 1920s hot dance arrangements. Mike obliged by writing charts for tunes like “Slue Foot”, and the style of the band increasingly leaned toward hot dance. Banjoist John Gill said, “You guys are a breath of fresh air.”

Mike proposed marriage to Leah in classic bandleader fashion: he told her it would make it easier getting to and from gigs that way. Despite this pragmatic approach, they wed in 1980. Leah says, “If it wasn’t for Mike, I wouldn’t be playing at all.” She moonlighted with the WEJB while maintaining her day gig as court reporter. 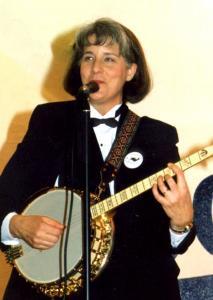 Mike proved to be a wizard at writing arrangements. “He has a mathematical brain,” says Leah. “He would sit down and write three charts in a row.” Mike developed the knack for writing charts that would make their six-piece group sound like a big band. The trick was that most of the musicians doubled and played all the time. He modified Bill Challis arrangements originally written for Paul Whiteman that sound surprisingly rich and full when scored for six—and without piano.

Leah herself earned the reputation of being able to keep the beat. The legendary Franz Jackson called her “metronomic.” Mike Cogan dubbed her “The Relentless Banjo.” Wayne Jones said, “If you can’t swing with Leah and Walbridge in the rhythm section, you must be dead from the hair down.” For vocals, Leah adopted the persona of “Leah LaBrea, the Windy City Songbird” to perform selections made famous by now-obscure ’20s vocalists Jane Green, Zelma O’Neal, and Betty Morgan.

The band worked steadily, averaging park concerts four or five nights a week. They played two European tours as ambassadors for Chicago tourism in Paris, Belgium, and the Netherlands. One tour included a week-long side gig at the Hyatt Hotel in Nice, France.

Leah is perhaps most proud of bringing Coon-Sanders music back to the Blackhawk Restaurant.

Carleton Coon and Joe Sanders famously broadcast from the Blackhawk in Chicago, and Leah and the West End Jazz Band closed Don Roth’s Blackhawk with “Roodles” and other Nighthawks tunes. The WEJB also re-created authentic Coon-Sanders performances at the Coon-Sanders Fans’ Bash in Huntington, West Virginia.

The West End Jazz Band with Mike Bezin as leader represented a high standard of musicianship, surpassing itself with each new CD. The last two albums issued on Bryan Wright‘s Rivermont label are particularly outstanding. But then, at the top of his game, Mike left the band business.

Leah suggests that Mike’s decision to retire was borne of a certain frustration. “What we play is not nostalgia,” Leah said. “When most people hear the real 1920s music, they don’t recognize it.” While Mike was arranging such esoteric tunes as Joe Steele’s “Top and Bottom”, audiences were demanding The Saints. Mike decided 40 years as a bandleader was long enough.

Mike handed over the baton to WEJB trombonist Frank Gualteri. The band itself is still very much in business, with Mike’s excellent charts in the book, and Leah remains active in music and available for banjo gigs. She expresses optimism for the future of the music she loves. “It’s more of a crossover, a hybrid these days,” she said. “The young musicians bring different styles and influences to the bandstand—some groups have a string-band edge. And the swing dancers are giving it a new audience and keeping it alive.”

Many loyal fans of the West End Jazz Band continue to revel in their music. One recently took WEJB CDs in with her to relieve her discomfort during chemotherapy sessions. Leah says, “God puts you on earth for something. Maybe easing that person’s pain is the one thing God put you here for. You don’t choose it, it wasn’t what you meant to do—it happens.”