Banjoist and guitarist Jack Bland (May 8, 1899 – August 1968) is best remembered as the banjoist for the Mound City Blue Blowers which he co-founded with Red McKenzie in St. Louis. By 1924 the group had a hit record in Chicago with “Arkansas Blues”. Later that year guitarist Eddie Lang joined the group and they toured England.

By the mid-to-late 1920’s Bland, like Eddie Condon, switched from the banjo to the cello bodied four-string tenor guitar. By 1929 Eddie Lang left the Blue Blowers and they became Red McKenzie’s Mound City Blue Blowers and became a more traditional sounding hot outfit with the addition of Gene Krupa on drums, Muggsy Spanier on cornet, and Coleman Hawkins on tenor sax and Eddie Condon on banjo.

During the 1930’s Bland was freelancing around New York City and recorded with two groups. The first was the Billy Banks Orchestra with Pee Wee Russell on clarinet, Henry “Red” Allen on trumpet, and drummer Zutty Singleton followed by the Rhythmmakers, which was essentially the same group with Pee Wee Russell switching to tenor sax, Pops Foster on bass and Fats Waller on piano. In 1932 Bland recorded with his own group Jack Bland and his Rhythmmakers which had Tommy Dorsey on trombone. Both of these groups featured Eddie Condon on banjo. 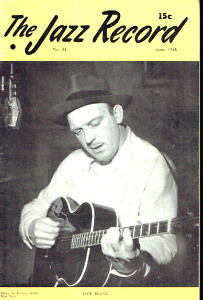 In 1940 Bland recorded with Condon’s longtime drummer George Wettling and formed his own group later that year. In 1942 Bland went back to freelancing and worked with pianist Art Hodes from 1942 to 1944 and recorded with Muggsy Spanier in Chicago in 1943. By 1944 Bland was playing with his own group, and by the 1950s moved to Los Angeles where he retired from music and worked for a taxi service. Jack Bland died in October of 1968 while living at 91401 Van Nuys in Los Angeles.- by Ted Gottsegen

Thanks to David Apolloni for tracking down the date of Jack Bland’s death.