Four and a half years ago I first met Colin Hancock, whose recognition and reputation as an eminent authority on early jazz, especially that performed by college bands, continues to grow. It was February 26, 2017—the 100th anniversary of the first recording by the Original Dixieland Jazz Band. On that day I went to Ithaca, NY, to see the Original Cornell Syncopators, founded and led by Colin, perform the music of the ODJB. Many people consider this record—Victor 18255—as the first jazz recording, but more erudite voices have found what would be considered jazz to have been recorded a little earlier.

The OCS subsequently went on to learn and perform the music of important bands of the early 20s, to perform at several jazz festivals, and to produce two CDs—Wild Jazz and Live at the Triad. The latter is just what it says—a concert recorded at the Triad Theater on W. 72nd Street in Manhattan. I was there, too. I booked the band for the Tri-State Jazz Society in November, 2018. One week later they made their second of two consecutive appearances at the San Diego Jazz Festival.

By now all the original OCS members have graduated (save for Professor Robbert van Renesse, banjoist, guitarist, and faculty advisor), but Colin continues to create and lead bands to perform—and now record—this early music, much of which is overlooked by even some well-known and respected contemporary bands.

So impressed had I become with the band and with Colin’s creative abilities that I made another trip to Ithaca when Collegiate, their newest CD produced by Rivermont Records’ owner Bryan Wright, was recorded there over two days in April, 2019 at St. Paul’s United Methodist Church. This album is about to be released and is certain to be reviewed in these pages very soon.

Here’s the rest of the story, in Colin’s words:

“One of Those College Bands”

When I was studying in Rome in the spring of 2018, I made it a point to get to know as many people on the scene there as possible. One of them was the incomparable music historian Enrico Borsetti, whose restorations of Jazz classics I have been listening to for over a decade. Our regular spot was a pizzeria in the Trastevere neighborhood where we had some really interesting conversations. One of them focused on contemporary European bands playing in 1920s styles, particularly the Original Prague Syncopated Orchestra. I mentioned one of their recordings of a tune called “Sick O’Licks,” and asked Enrico about it. “It was by a band led by Jack Davies called the Kentuckians. I believe it was one of those college bands,” he replied. I then mentioned that my band, the Original Cornell Syncopators, was considering adding it to our book, and made a joke about how it’d probably be the first time a college band would play it since the Kentuckians. The conversation moved on, but the thought of that connection stayed with me.

I recalled other discussions about collegiate jazz I’d had here and there: pondering over a photo of the Cornell Collegians on display at Ithaca College with David Sager; chatting with David Jellema about the Princeton Triangle reunions in the 1980s; emailing back and forth with Phil Schaap at Juilliard about Don Redman’s time at Storer College. It began to hit me that this was an area of jazz history that was both overlooked and quite significant. It also hit me that I was in the right place at the right time to address that.

The Cornell Syncopators had a busy touring schedule that fall, but talks among the musicians of a semester-length project focusing on the college bands began. I started deep diving into as many archives as my university ID would get me into, and it became clear that with so many bands from so many schools, categorizing them based on cultural and regional heritage would be the only way to keep things on track. I soon reached out to my friend Bryan Wright at Rivermont Records to see if the project would suit his legendary label, and he responded enthusiastically. Thus, we began preparing for Collegiate, an album devoted to the college bands.

Being Cornellians, the easiest category for us to learn about was the Ivy League. Through my friend David Jellema, I learned about Tom and Stu Pletcher (and as a result, the Princeton Triangle Jazz Band and the Yale Collegians). Michael Kieffer told me of his experiences with Rudy Vallee, while Paul Merrill, Ed Clute, and Robbert Van Renesse taught me about Spiegle Willcox and the Cornell Collegians. Meanwhile at Dartmouth, Prof. Taylor Bynum and some of his students taught me the incredible century-long story of the Barbary Coast Orchestra.

Switching to Middle-American schools, my friend Dave Bedrich helped me learn about bands like Jimmie’s Joys and Hal Kemp, while Albert Haim provided invaluable information on Charlie Davis and the Happy Harmonists. Jim Drake and David Sager got me hip to Gus Haenschen’s 1916 rarities, ultimately leading to a GRAMMY nomination for “The Missing Link” project with Archeophone Records.

The most difficult part, however, was telling the musical stories of historically Black colleges and universities. While many are known individually (think W. C. Handy, Lil Hardin, Cecil Scott, Don Redman, or Jimmie Lunceford), learning about the topic as a whole proved quite challenging. Fortunately, fellow Syncopator Hannah Krall worked tirelessly to fill in several gaps, and we ended up writing one of the best parts of the project on the subject. We capped everything off with getting to know the Ashcraft, Haas, Haenschen, Lucier and Willcox families, an experience we will always cherish.

The band spent months preparing for the project. With many obscure artists who would never be mentioned in any college music class, I was astonished to see the passion my bandmates put into it; some, like then-sophomore Stephen Newcomb, even took up new instruments just for this! We recorded the project over a memorable and hectic two day session with Bryan (20 titles in two days!). With graduated bandmates and friends in town it was a most memorable reunion. 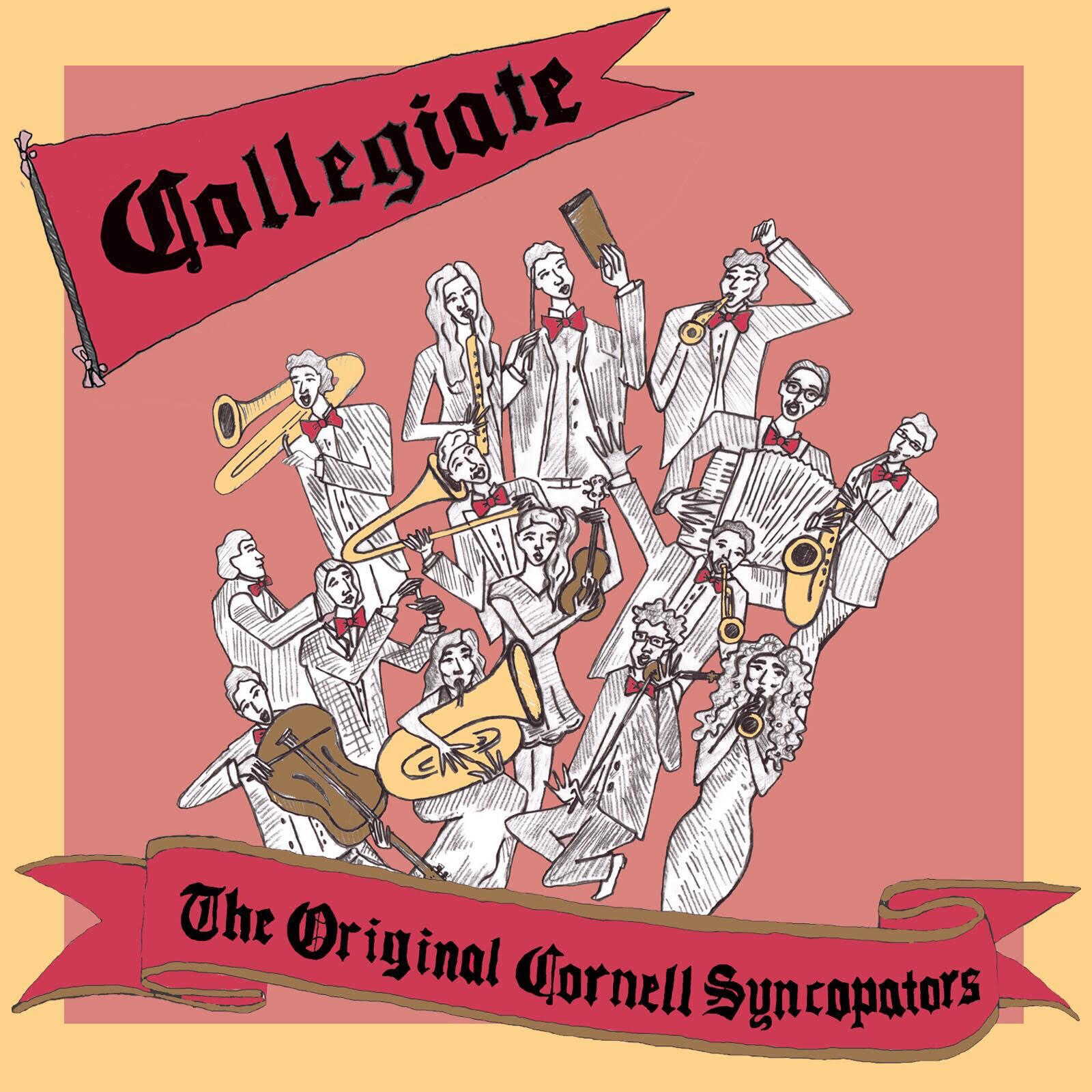 Reflecting on the project now at its release, I am filled with both nostalgia and pride for my time in that band, and a sense of reverence for all of the college bands covered in Collegiate. Indeed, it is this latter point which makes the project so special. These bands helped popularize and spread jazz across the United States, and served as training grounds for countless musicians. They were the music’s target audience, living the Jazz Age in real time.

While many of these bands fizzled away at graduation, many others had lasting careers—some like Rudy Vallee or Fred Waring for decades. Musicians like Bill Priestly and Jack Howe organized events like the Chicago Rhythm Club meetings or Princeton Reunions to keep the music alive, while others like Spiegle Willcox or Dave Wilborn continued performing with younger musicians, passing the torch along the way. As a bunch of collegians ourselves, it is our hope that Collegiate will not only honor these important stories and contributions, but also tell our own story in the process.

Bill again: Colin has just completed his master’s degree in urban planning at Columbia University. His intention is to go to law school, hopefully at Columbia (so he can stay in New York and continue making music), but his plans are fluid. He and some musician friends have just moved into a brownstone in Brooklyn where Colin can set up his recording equipment in the basement. His efforts at making cylinders have previously been featured in this paper. We can all look forward to more great accomplishments from this extraordinary individual.